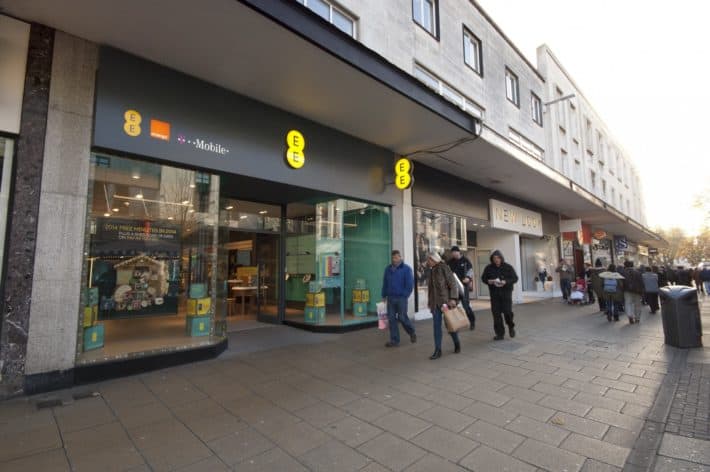 EE, the British network built by combining Orange and T-Mobile (UK), were the first to launch a 4G LTE network by almost twelve months. It's no surprise that EE have the largest network but in addition to rolling out coverage, EE has also been working to improve the performance of the network. It was the first network in the UK to offer LTE speeds over the standard and launched its LTE-A network in London in October 2014, which is it calling 4G+. EE's 4G+ service theoretically doubles the network download speed from 150 Mbps to 300 Mbps, subject to network conditions. EE's LTE-A works by carrier aggregation, in other words, EE combine spectrum at the 1,800 MHz point (it's their core LTE network) with spectrum at the 2,600 MHz point. Unfortunately, EE customers outside of London will have to wait until at least the summer before the technology is rolled out.

LTE carrier aggregation has the advantage that it is relatively easy to implement once the necessary software is in place: the carrier simply extends coverage using a different frequency. It is also scalable. Today, EE in conjunction with the Qualcomm Snapdragon 810 processor, have demonstrated this by demonstrating their latest network development, which is LTE operating at up to 400 Mbps also known as Category 9. EE have achieved this by allowing another 15 MHz slice of spectrum: the demonstration used three lots of 20 MHz at the 1,800 MHz frequency and then the combination of a 15 MHz and 20 MHz slice of 2,600 MHz spectrum. Although customers will need a Category 9 device in order to see 400 Mbps data speeds (and these are not yet available on the market), one of the advantages of carrier aggregation is that it allows a more efficient use of the available spectrum. This means that devices not able to combine the different frequencies could still see network performance increases.

Trailing the technology at Wembley Stadium may seem like something of a gimmick, but major sports events present carriers with a capacity issue: Wembley can hold almost one hundred thousand people and the majority will own a smartphone. It is not inconceivable that many smartphone owners will want to use their device for multimedia during an event. Enabling both higher speeds and a more efficient allocation of spectrum should ease network congestion. EE's demonstration used twenty-five Samsung Galaxy S5's and six 4K televisions supplied with data from an EE server, which was provided with data via the EE network and able to maintain a steady 400 Mbps data connection.

Meanwhile, it is encouraging to see EE successfully demonstrating new, higher-speed network technologies as it will need these in order to differentiate its network from the competition. Until the Three/O2 deal goes through and the carriers can combine networks, EE are the only UK carrier with the necessary spectrum across different frequencies to successfully employ carrier aggregation.