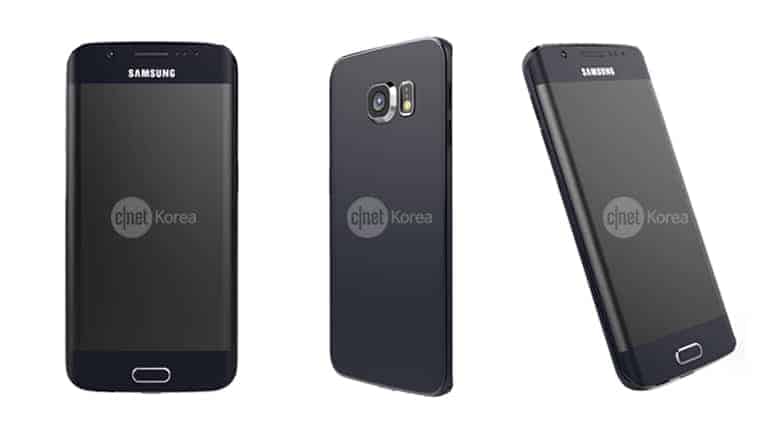 If you were wondering whether or not the cat was really out of the bag, it would seem like the answer is unfortunately; yes. Any big device release like the Galaxy S6, or indeed the HTC One M9, has hundreds of people involved and there's probably units entering mass production as we speak. As such, it's no surprise that we've seen these devices leak out piece-by-piece and in the case of the HTC One M9 there's little we don't know at this point. It looks like the same has happened to Samsung's Galaxy S6 this week as well, with the two models being spotted in the wild and little parts here and there like the earbuds and even apps leaked out ahead of time. Now, CNET Korea has managed to get their hands on what could be official press renders of the device before Samsung take to the stage Sunday evening.

CNET Korea has since taken the photos down, but we still get a close look at what could be the Galaxy S6 Edge. These are easily the best looks we've had at the device yet, and while there's every chance that even these aren't 100% final yet, it looks like the general design of the Galaxy S6 and the Galaxy S6 Edge is all but confirmed by Samsung at this point. These photos don't give us much of a look at the rear of the device, and instead focus more on the front of the device and the edges that adorn the left and right of the display. There's also not much detail around the sides of these images, certainly not the sort of detail that we've seen in previous leaks.

We know a lot about the Galaxy S6 already at this point. We know that the Exynos 7420 is to power this year's flagship instead of a Snapdragon CPU and we know what the device is going to look like. The only big questions left to be answered at this point seem to be whether or not Samsung has anything else up their sleeves and whether or not the rumors of a much, much lighter TouchWiz are true. Nevertheless, there's still a lot of excitement at play here, and we'll be live in Barcelona with all the news.