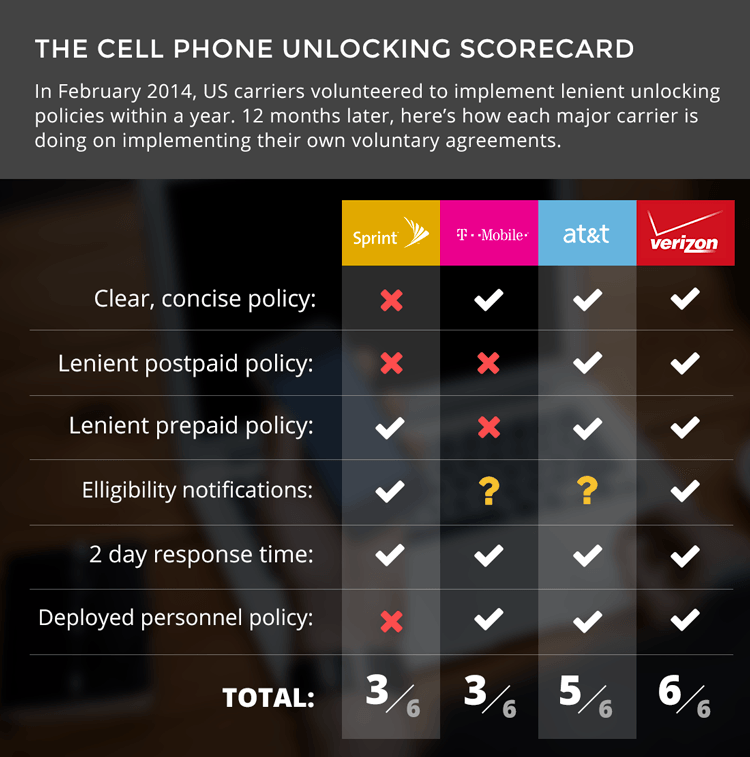 About this time last week, an important milestone had been reached. This was the deadline for which network carriers in the U.S. had to comply with voluntary agreed terms in respect to unlocking mobile phones. The February 11th deadline was a result of ongoing pressure from the FCC, Tom Wheeler and public demand. These pressures reached their climax towards the end of 2013 when the carriers finally agreed to implement certain policies, which, in short, obligated carriers to assist users in unlocking their devices. That is, if the customer so wished and if they had completed their original contracted terms.

In terms of those policies, the big headline points were that carriers were required to provide information to their customers. Carriers are expected to make their unlocking policy and details public (and easy to find), carriers are expected to notify their postpaid customers once they are eligible for unlocking (contract ended) and to respond to all unlocking questions/requests within a timely two-day limit. Those were the main points the carriers agreed to and they had until last week to implement the points into their day-to-day business. Now the deadline has passed, it is interesting to see how the carriers stack up in this respect. Thanks to Sina Khanifar, we now have some insight into the carriers progress, shortfalls and implementations. Khanifar was one of the main spearheads behind the original movement to force carriers to make unlocking a requirement. Following on from the passing of the FCC agreed deadline, Khanifar  looked into the four major carriers current stance on how they have so far (as of February 13th) adopted the agreed terms.

Well, in respect of the main points to note and as can be seen from the infographic, Verizon seem to be the front-runner in adopting the agreed policies and appear to have adapted their unlocking policy, in line with what was expected. According to Khanifar's findings, Version have subsequently made their policy available in a clear and concise manner, have a sufficiently acceptable policy for both post and prepaid customers, have implemented eligibility notifications, offer a response within the two day 'request' timeframe and implemented a deployed personnel policy (unlocking of servicemen and women's smartphones for use abroad). Likewise, AT&T seemed to have made good on their promises and also scored highly on Khanifar's testing. However, unlike Verizon, AT&T did seem to fall by the wayside when it came to notifying customers of their right to unlocking. According to Khanifar "We were unable to find any information about whether AT&T has implemented any notification system to let prepaid customers know of their unlocking eligibility. We spoke to two customer service representatives who gave me conflicting accounts of how notifications might be delivered, and the official unlocking website was unclear."

That said, it seems AT&T in spite of their notification confusion performed significantly better than both Sprint and T-Mobile, who both failed on three of the said 6 voluntary requirements. In terms of T-Mobile, Khanifar found the carrier did offer unlocking policies for both post and prepaid customers, although these policies were not straightforward and required too many caveats to be considered complying with the voluntary requirements effectively. Not to mention, Khanifar also found it difficult to obtain any information on how T-Mobile offer notifications to those who have reached their 'right to unlock' status. In sprints case, Khanifar found the carrier did provide unlocking information, but that same information was found to be unacceptably vague and not "clear, concise and accessible". Furthermore, Sprint came under scrutiny for both their postpaid and deployment policies by adding unnecessary (and against the agreement) restrictions on unlocking devices. For instance, for both postpaid and service personnel, there was an issue of being able to unlock more than one device within the same 12-month timeframe. As Khanifar points out, this is against the guidelines of CTIA's consumer code.

If you are interested in knowing more, you can read Khanifar's report and findings in full by clicking the source link below. In the meantime, if you have had any experiences with your carrier in terms of unlocking recently, then let us know what happened.