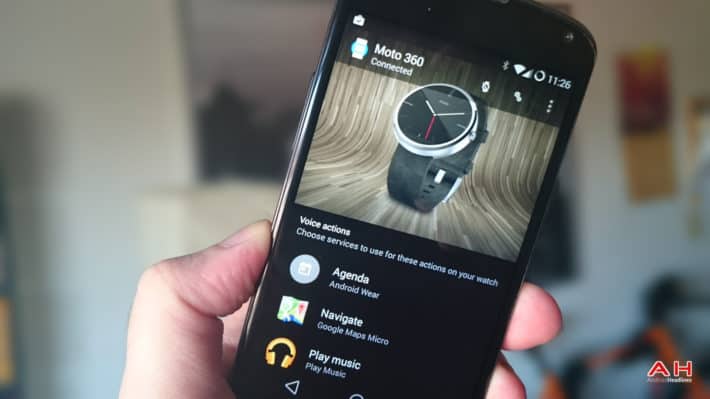 Android Wear is going to be one year old this summer, and the platform has come a long way.  There are watches from Samsung, LG, Sony, Motorola, and ASUS, and more to come this year, if the traditional smartphone life cycle is to be followed.  One of the biggest problems that people have, and rightfully so, is that Android Wear is (logically) only compatible with Google's Android (that is to exclude Amazon's fork of Android used on Kindle and Fire devices).  Apple's customers have to either wait for the upcoming Apple Watch to get any sort of rich notification interface or settle for the more veteran Pebble smartwatch, whose display is e-ink and rectangular with an interface more meant for receiving than interacting with your smartphone's notifications.  But, that limitation might be a little less obvious after you watch this video by Mohammad Abu-Garbeyyeh on YouTube.

It's a short watch at just ten seconds, and the climax of the video is a matter of seconds as well.  Mohammad has, using some developmental trickery and cleverness, gotten his Android Wear device, a Moto 360 by looking at the round display, to mirror a notification from his iPhone 6 which sits next to the watch.  If you wait, you can see the notification that pops up on the watch features the Android Wear card-style notification topped with the icon of Apple's iMessage app instead of any Android app.  How can we trust this, especially since we've been told by many folks that the Android Wear platform is explicitly not compatible with iOS?

The iPhone utilizes something called ANCS, Apple Notification Center System, which is what the Pebble uses to mirror notifications to the watch from the connected device.  The service allows notifications to be sent from an iOS device to route through a Bluetooth Low-Energy  connection.  This just goes to show you that even exclusive software that uses a standard like Bluetooth and can utilize developers' ingenuity to make cross-platform compatibility possible, however unintended. Should Android Wear remain exclusively Android-compatible, at least officially, or should it be able or allowed to work on other platforms like Ubuntu Phone, iOS, or Windows Phone?  Do you think that more manufacturers should make greater efforts to expand their devices' coverage to non-Android platforms while maintaining the form factors they already use?  Let us know down below.