A couple of weeks ago we talked about how Android TV seemed to lack in terms of the number of apps currently available for the platform. Android TV is young at the moment and as a result of this, there is far less adoption from the user perspective. Which presumably has resulted in far less motivation for developers to get their head down and port apps over to Android TV, or create new and Android TV original content. As long as the platform proves to be successful and once more methods of android TV become available, it is hoped there will be a much greater selection of apps available. But where does that leave those who have already bought the lonely Nexus Player?

Well, in the meantime, there are a few ways you can improve the range of apps you currently have available. Over the next couple of weeks, we will go over these ways including how to sideload apps on the Nexus Player. However, for today there is a neat trick for Android TV which you need to be aware of. Not all Android TV compatible apps show up on your Nexus Player’s Play Store. If you have checked out the Play Store on your Nexus Player then you will know that the offerings are quite limited and especially if you are not looking for a specific title. That said, Google do publish a list of apps and games which are currently available for Android TV. You can view the games list by clicking here.

That said, this list is not exhaustive. It is not completely clear why, but a number of apps and games are available via the Play Store which do not show up as Android TV apps and therefore, do not show up on your Nexus Player’s Play Store. It is presumed the difference between an app which has been deemed Android TV compatible and those which work on Android TV, is that the first has been optimised perfectly for Android TV. This does not mean the latter does not or will not work.

So how do you get these apps? Simple. Forget the Play Store on your Android TV and head back to your good old fashioned web browser. For the quick example below, we will be installing The Witcher Battle Arena. This is a new game which popped up on Android towards the end of January and as such, many people would probably like to see (and play) this on their big screen. If you check the above Android TV app list (or search on your Nexus Player) you will see that Witcher Battle Arena does not appear, therefore presumably is not compatible yet.

Instead, head over to the Play Store on a web browser (can be on your mobile or even on a web browser that you might have installed on your Android TV). Go to the Play Store. If using your mobile, make sure your device does not auto-redirect you to the app, you need to run this through the main browser to work. Once at the Play Store, search for “Witcher Battle” by the search bar. Once you are on the app page listing, click on install. At this point, you will see all the devices you have associated with your Play Store account, including your Nexus Player. If an app is completely not compatible (according to Google) then the option for Nexus Player is greyed out and it will state “not compatible with your device” as shown below.

However, if it is not greyed out and instead is boldly colored (as shown below), then you can install the app on your Nexus Player. This is what is interesting, as there is no real indication that an app is or is not compatible with your Nexus Player. A lot of apps, which are not promoted as ‘Android TV apps’ still function as just fine when installed. So on the install page, click on the highlighted Nexus Player and the app will begin downloading directly to your device. 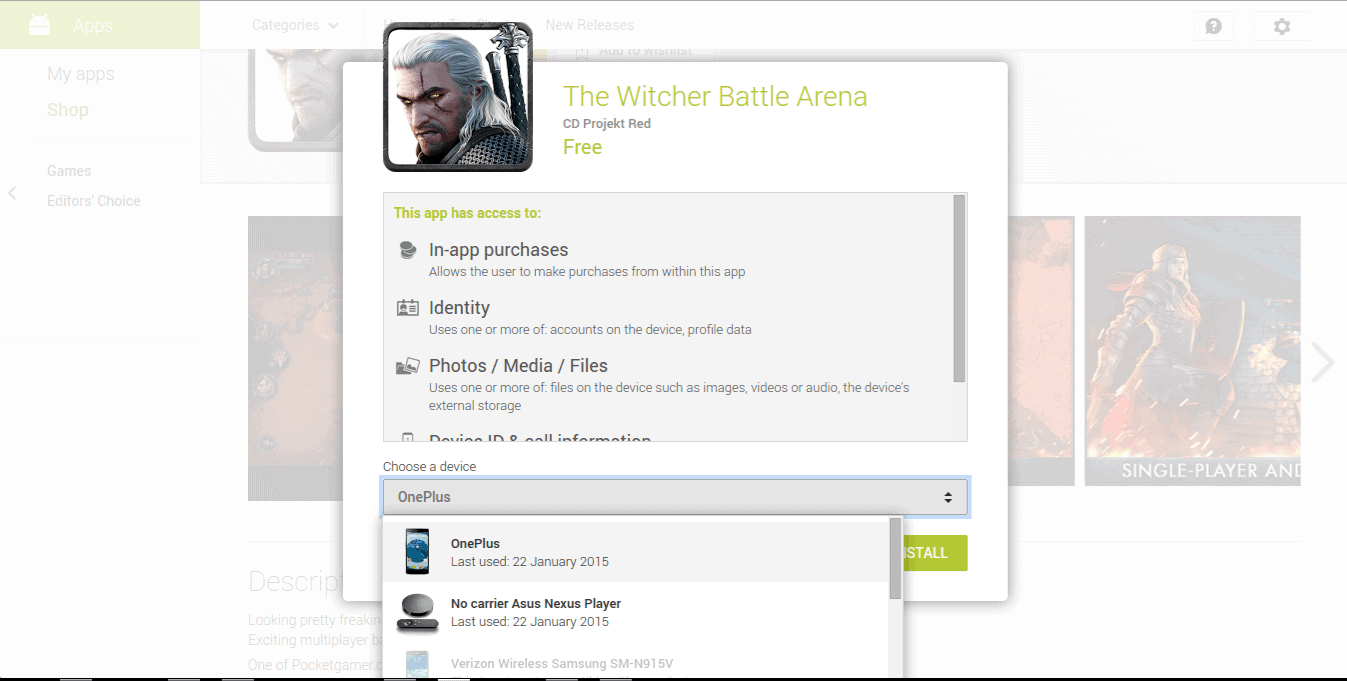 You can check whether or not the app was downloaded by refreshing the same page. Unlike before, now the Nexus Player listing under Install will appear greyed out. Although, this time it won’t say “not compatible with your device” but instead will say “your device already has this item installed”.

Now, boot back up your Nexus Player and you will see the game on your system. What is really sweet about this method compared to sideloading (come to this next week) is that as these are downloaded from the Play Store, they will show up on your main page along with all your other games and apps. 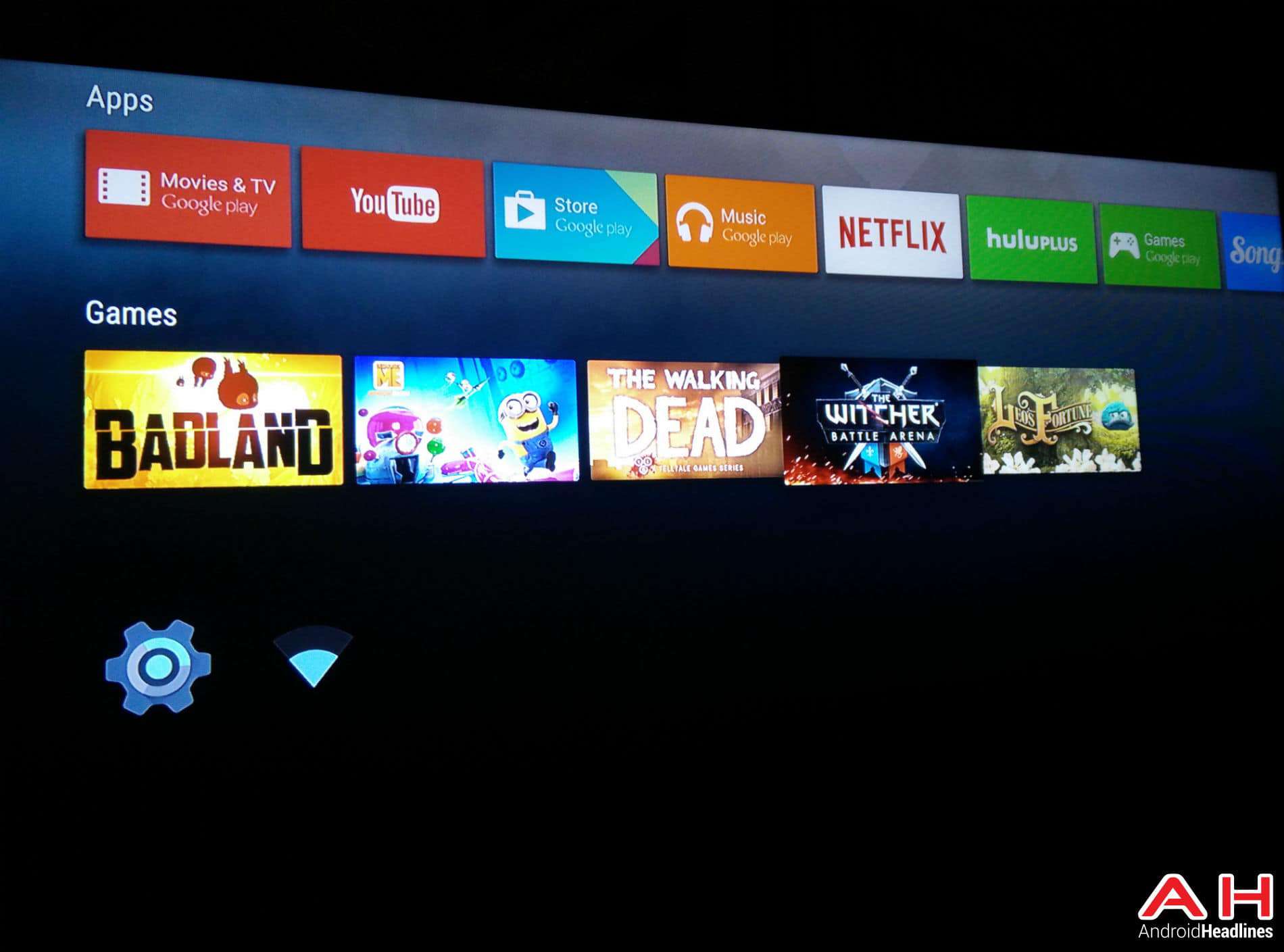 It’s worth noting that there seems to be as many available apps and games not listed on the Play Store (on your Nexus Player) as there officially listed on the device. There are too many to list here but to throw a few names your way – Google Chrome, Google Search, Evernote, BubbleUPnP, Poweramp Music Player, Tasker, MX Player and ES File Explorer. This last one is extremely important and you should download this to your Nexus Player as soon as possible. We will be using this app next week to sideload more apps onto your device. In the meantime though, you can check out the images below of Witcher Battle Arena running on Android TV.