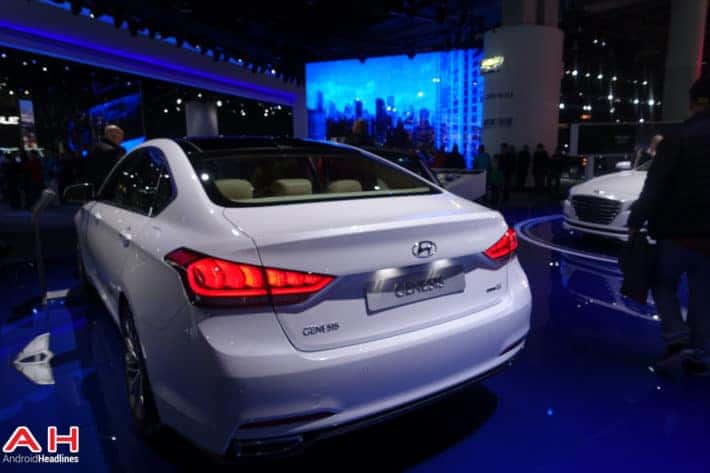 Last month we had the North American International Auto Show here in Detroit, and this month it was The Chicago Auto Show. The LA Auto Show will be later on this year around September. At the Chicago Auto Show we saw a bit of Android Auto make a presence there, but there were also a few other services shown off that were pretty awesome, like Hyundai's Blue Link app for Android Wear. So we'll be recapping all of this today.

Android Auto was shown off in Chicago on the 2015 Hyundai Sonata, Genesis and Azera. Audi showed it off on the Q7 as well as Acura TLX. Not much has changed with Android Auto, at least not that we can see. There were probably some changes internally, but the end user won't notice that really. Android Auto still looks the same across the board, primarily because Google is keeping a strangle hold on it, and keeping manufacturers from messing with it too much. So you won't see Touchwiz on Android Auto.

Hyundai's Blue Link platform is expanding. While their smartwatch app isn't really new – as they announced it at CES – it has been refined a bit to give users a bit of a nicer experience. The app is slated to be available in Q1, so it should be available rather soon. The Blue Link app which will work with Android Wear, will also work on any Hyundai model. Using the app, customers will be able to remotely start their car, remotely lock and unlock doors, flash lights, honk the horn and locate the car. Pretty neat for an app made from a car maker. Even neater that you can do that from your watch. Hyundai also has voice commands build in so you can control your car with your voice. What else could we ever want?

Ford's Sync 3 was also on display, a bit more than it was back at the NAIAS here in Detroit. Ford Sync 3 has a bunch of new features, but the more interesting ones to us are the Android Auto and Apple Carplay integration. Much like the other car makers out there, Ford has opted for supporting both in their new version of Sync. Simply plug in your Android smartphone (running Android 5.0 or later) and then select "Android Auto" and you're all set. It works the same for the iPhone, for those interested in that.

So lot's of cool technology coming soon from automakers. There's still no real release date for Android Auto, as Google hasn't fully released it yet, but we should see it coming real soon. Google has been taking their time on it to make sure it's perfect. Which I think is needed since it's in your car, and it needs to be safe for the driver.