Skip to content
Trusted By Millions
Independent, Expert Android News You Can Trust, Since 2010
Publishing More Android Than Anyone Else
36
Today
36
This Week
656
This Month
5766
This Year
115767
All Time Xiaomi has enjoyed great success in 2014, the company has managed to meet their expectations and sell over 61 million handsets last year, which is three times as much they were able to move in 2013. That’s not all though, Xiaomi became world’s third largest smartphone manufacturer in 2014, which is also a great success for the company, especially if you consider Xiaomi has been founded in 2010 and operates only in Asia at the moment.

That being said, Xiaomi did announce last year (mid-year) that they plan all sorts of international expansions in 2015. South-East Asia, India and Latin America have been marked as some of the markets the company would like to expand to, while Russia, Europe and U.S. also remain their goal. European and U.S. consumers will have to wait for a while it seems, Hugo Barra mentioned that it will probably take quite some time until Xiaomi is ready to battle it out with world’s biggest companies in Europe and the U.S. Mr. Barra clearly said that they aim at emerging markets, that the company’s model fits those markets best.

Well, Xiaomi’s co-founder shared an interesting image on Weibo this morning, he posted a picture of himself, Hugo Barra (VP of International) and Donovan Sung (International Product Director). That’s not all though, Xiaomi’s CEO also left a sentence for us there, which roughly translates to: “Xiaomi’s International team is getting ready for a big international move, we’ll release the details in February.” This sounds extremely interesting, after announcing a slew of new devices in January, Xiaomi seems to be getting ready to kick it up a notch. It will be interesting to see how will Xiaomi fare in 2015, they’re off to a great start, that’s for sure.

Which market(s) do you think Xiaomi will hit first? If I had to guess, I’d say they’ll announce the expansion further into Asia first, perhaps India, Singapore, Philippines, Malaysia and Indonesia. Latin America is not out of the question either, Xiaomi has been preparing the turf for a move to Brazil for quite some time now, so that’s a possibility as well. Anyhow, we’ll know more next month, stay tuned. 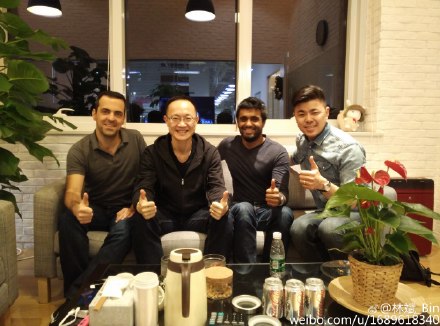