It’s not exactly a secret that Xiaomi is one of the fastest growing smartphone manufacturers in the world. This company has been growing at an amazing rate. Xiaomi was founded back in 2010, it shipped 19 million smartphones in 2013, and in 2014 the company has moved 61 million units. That is impressive, no matter which way you look at it. Xiaomi has been China’s number 1 smartphone manufacturer for a couple of quarters now and it was obvious that the company will sit at the top of the food chain in the annual report.

The annual report has been published, and Xiaomi is, for the first time ever, on the top of that list. According to this listing, the company has sold 60.8 million smartphones in 2014 and is holding 14.97% of the market. Samsung is ranked second in this report, this Korean company has sold 58.4 million smartphones and has a 14.38% market share in China. I actually expected that the difference between the two companies will be even more pronounced considering that Samsung’s profits took a 50% dive in Q3 2014, as far as China is concerned, but Samsung is really close second.

There you have it, the chart is included down below, so you can check that out if you’d like. That being said, Xiaomi is expected to continue its dominance in China in 2015, the company has already released 3 new smartphones, and a couple additional device this year, and we’re just getting started. I was surprised not to see Meizu included in this list though, but I’m sure that they’ll make the list next year, Meizu released three great smartphones starting with September last year, and were apparently unable to sell enough of them in Q4 in order to be included here. Let us know what you think, we’d love to hear from you, as usual. 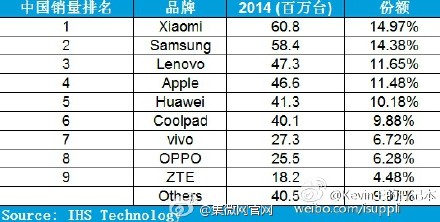