The next greatest offering coming from Qualcomm in the powerhouse department is going to be the Snapdragon 810 chipset, but at this point in time though there aren’t any devices that have officially been stated to carry the processor. With that being said though it appears that an unannounced LG handset has shown up on a benchmarking website listed as being powered by the Qualcomm Snapdragon 810, and the first thing that comes to mind for us is the next flagship device coming from LG, whatever that may be. The LG device is listed under a model number LG-F510L, which doesn’t tell us much, but the benchmark listing does point to a couple other details.

The LG-F510L as it appears on the benchmark will be running Android 5.0.1, and the processor is listed as being clocked at 1.55GHz with 8 cores. It also lists the device as having around 2GB of RAM, which seems a little odd at this point in time for it to be a flagship like the LG G4 since the LG G3 came with a 3GB of RAM option on the model that came with 32GB of internal storage. It is possible however that the LG could choose to do the same thing with the LG G4 in terms of storage size and RAM combinations and come out with a 16 and 32GB model each having 2GB and 3GB of RAM respectively, and the LG G4 has been rumored to carry the Snapdragon 810 CPU.

At this point this is all merely speculation as there are no real details to point to what device from LG this could be, but we can only hope that if this ends up as the LG G4 it will come with more memory than 2GB(1838MB as listed on the benchmark). Although this may not pan out to be the successor to the LG G3, if it’s running the Qualcomm Snapdragon 810 it should still end up being a real beast. LG likely isn’t poised to unveil anything major in the way of powerhouse phones until MWC next month, so whatever device is listed here, we’ll still have a little bit of time to wait before we know anything official. 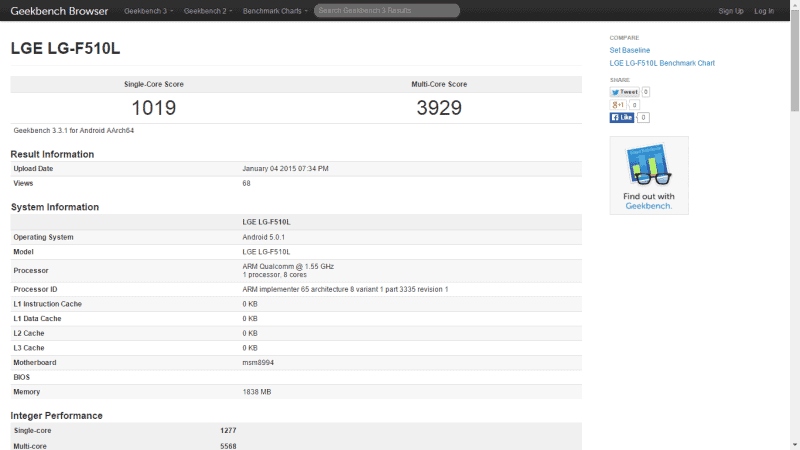