Ever since Xiaomi’s CEO announced that the company will release their new flagship handset on January 15, everyone immediately assumed that we’ll see the Mi4S or the Mi5 launched. This is to be expected, considering that is the only Xiaomi flagship line at the moment. I still believe Xiaomi will launch this handset on January 15 and I doubt that Lei Jun would refer to anything else as the “flagship”, but there were some leaks recently which teased the Snapdragon 615-powered Xiaomi-made handset. We already mentioned that the Redmi Note 2 will probably be released soon as well, and this handset could be powered by this chip. Well, the unannounced Redmi Note 2 just got listed on Oppomart, though it is listed as “out of stock” at the moment, of course.

According to Oppomart’s listing, this handset will feature a 5.7-inch 1080p (1920 x 1080) 2D glass screen along with 2GB of RAM and 16 or 32GB of internal storage (depending which version you opt for). The device will be powered by Qualcomm’s Snapdragon 615 (MSM8939) 64-bit octa-core processor which ships with an Adreno 405 GPU for graphics processing. 13-megapixel camera will be located at the back of this handset according to the listing, and a 5-megapixel snapper will be available up front. 3600mAh battery is also listed here as well as Android 4.4 KitKat OS and, of course, Xiaomi’s MIUI 6 skin which will be located on top of it. The listing also says that the device will be available in multiple color options and that this will be a dual-SIM capable handset (2x microSIM). The handset will measure 141.89 x 71.4 x 6.1mm and its weight isn’t available at the moment.

That being said, this handset looks almost identical to the Xiaomi Mi4. It looks so similar, that it could actually be a slightly photoshopped version of the Mi4, which would also mean it’s fake. I don’t know what to think of this to be honest, these specs look rather solid and considering this is supposed to be a really affordable mid-range handset, I believe it would sell well. I’m not sure this is legit though, I’ll leave that up to you, the listing could be real, but the image which is used to represent the device seems fishy to me. Let us know what you think. 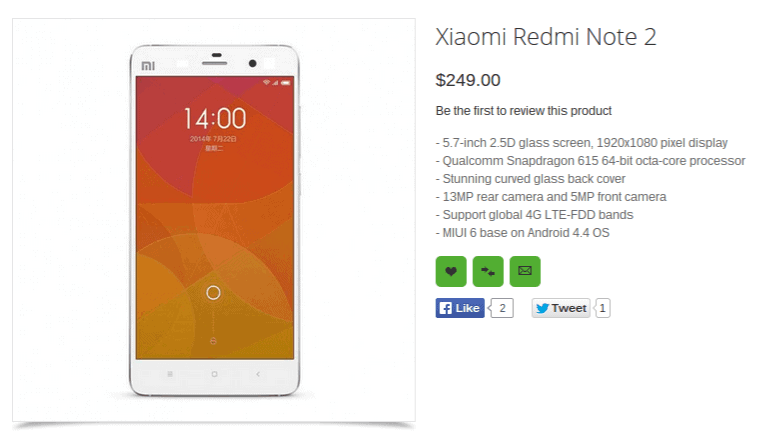