Jaeger Strike is a top-down space shooter game for Android that offers 10 missions, each with a grueling test of skill for the player against numerous enemy types and turrets. With good-looking 3D graphics that create a level of depth and help paint a picture of a space battlefield, Jaeger Strike also has fast-paced audio tracks to complete the look and feel. It's a game that fans of sci-fi shooters from the golden days of gaming would like. With tough boss levels, a gritty sci-fi look and feel to it and a four different control schemes, Jaeger Strike sure seems like an accomplished shooter. Let's take a closer look at the game and see whether or not it's for you.

As with most games on Android, you can download Jaeger Strike directly from the Play Store, with free and paid versions available. Once you've downloaded and installed the game, you can go ahead and start playing.

Here, you can sign in to Google Play Games to connect with friends, or just go ahead and get started by hitting the missions button. Doing so allows you to choose a mission. Here, I'm starting from the beginning of course, but if you'd like you can easily reset your progress to play the game again. When you choose a mission, you're also given a chance to choose from one of three difficult levels once you choose a level to play through.

When you first start playing, you're given a quick introduction into how to actually play the game. There's quite a bit to keep an eye on onscreen, but you quickly get used to everything, at least I did.

Right away, you get a feel for how the 3D graphics present a feeling of depth. This might be a game that relies on mechanics from older, classic topdown shooters, but the graphics are anything but oldschool. 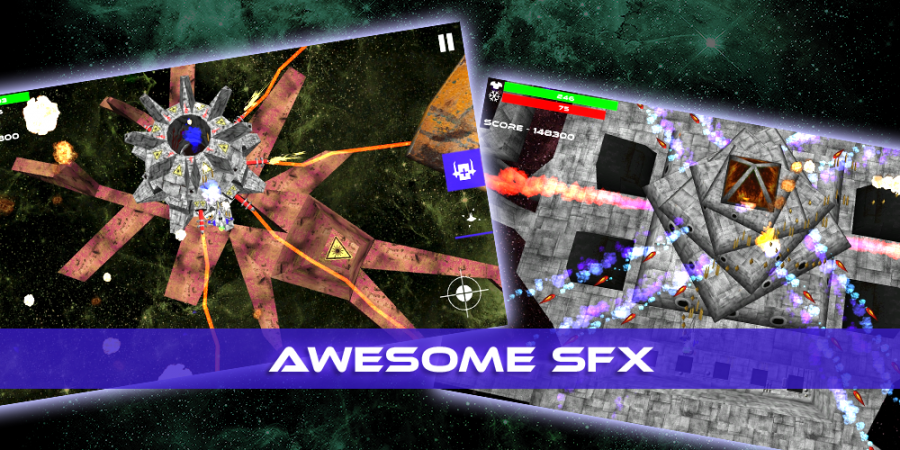 Each ship and attack seems like it happens in 3D space, it's a lot of fun to see other enemy ships as well as allies to fly close to the camera, further away and in between all the action going on.

I enjoyed the varied enemies, the different ships, the turrets that pose a serious threat when you keep on traveling through the battlefields as well as everything that's happening around you.

As you keep on progressing through the levels, you do get pickups like weapon cool downs, score multipliers and repairs that will replenish your health.

Further into the game, you'll get access to more powerful weapons, too.

The bosses at the end of each level are a nice challenge, and this is where the movement controls come in to their own and really bring the game together. I found it a lot of fun dodging all the attacks and trying my best to dish out damage consistently.

After spending some time with Jaeger Strike, I found it to be an excellent throwback to the classic topdown shooters of the 90s and before that. I had a lot of fun with the easy to use controls and I was pleased to see a couple of variations available for people to choose from as controls on Android games can be a problem at times. The 3D graphics aren't exactly mindblowing, but the 3D assets are sharp, and there's a gritty look to the aesthetic that I really liked. As Jaeger Strike has been rendered with a parallax camera, objects not only appear to be further away, but they are in fact rendered as such. True depth is created as a result and even though the display isn't 3D the effect is pretty convincing. This isn't one of those silly games that puts one ship pilot against a great number of enemies either, as there are friendly and enemy ships each level, creating a sense of struggle between good and evil which is certainly nice to see in a game like this.

All-in-all, I had a good time with Jaeger Strike and I can see why other gamers that remember games like R-Type and Galaxian will, but I can also see this being a fun change of pace for casual gamers as well. Jaeger Strike looks great too, with excellent depth thanks to the 3D graphics and a darker, more realistic sci-fi look that stands out from other, overly-colorful titles. A great game all round, this is worth giving a spin.

Trusted By Millions
Independent, Expert Android News You Can Trust, Since 2010
Publishing More Android Than Anyone Else
2
Today
144
This Week
372
This Month
372
This Year
101867
All Time
Advertisement