Aliens & Farm is an Android game that, as the title quite obviously suggests, puts Aliens in a farmyard and tasks you with saving the farm animals. Aliens have invaded the farm and it's your job to get rid of them in various levels of whack-a-mole fun throughout the farm against various different Aliens. There are various levels, with each of them getting progressively more difficult and there's also a survival mode included for those looking for an extra challenge once they've completed the levels.

Aliens & Farms is just a quick download away from the Play Store and then you can go ahead and start whacking some Aliens. 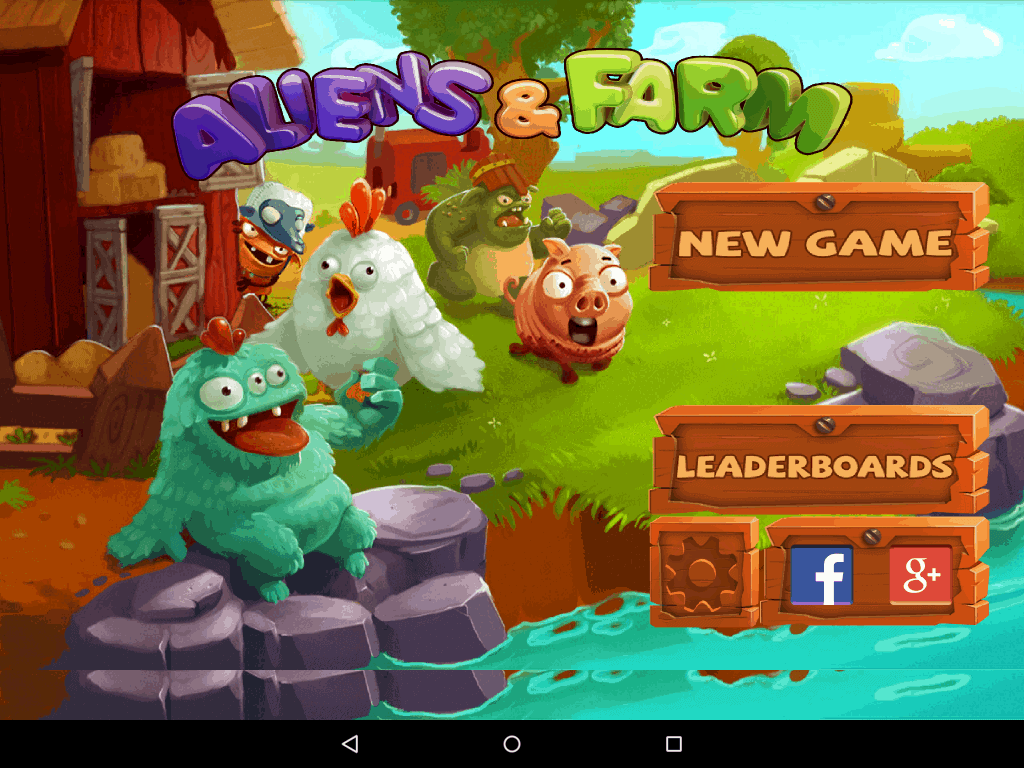 At the main menu, you're given the option to link up with either Google+ or Facebook. Signing in to these gives you the option to earn achievements and compete against friends. 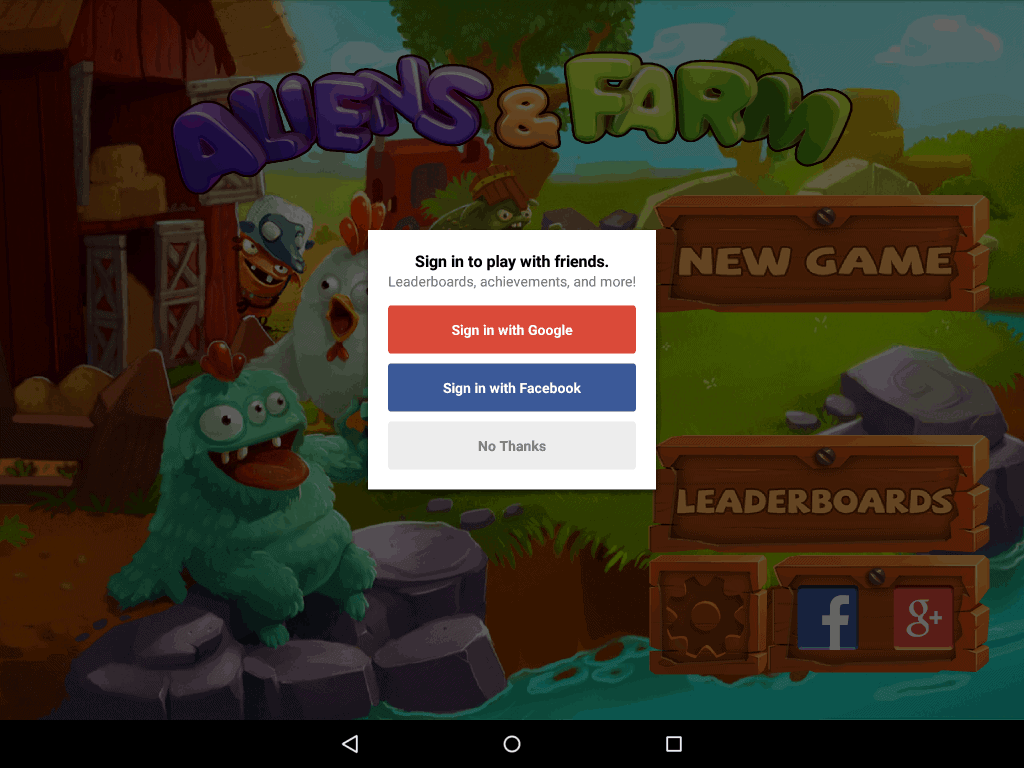 Each level comes with a new Alien or a combination of Aliens for you to take on. At the beginning of each level, the Aliens are each given an introduction. It's nice to see a game like this put some sort of emphasis on their enemies and it adds an atmosphere as well. These are also useful clues on how to overcome each alien. 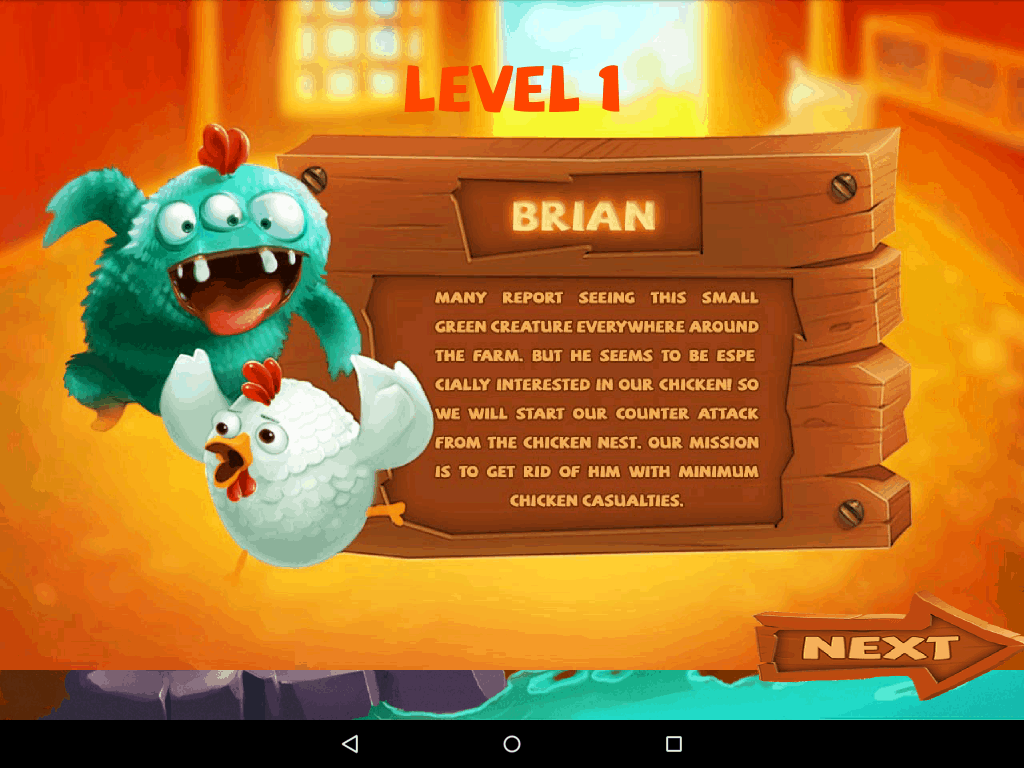 It's obvious that this is a game built using whack-a-mole mechanics, but you will come across a number of powerups – like the snail that slows down time below – that make the game feel fresh time after time. 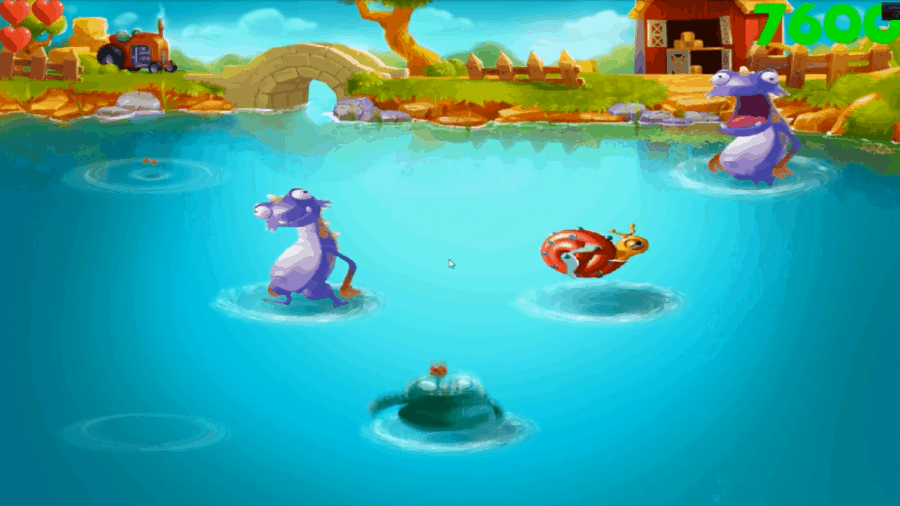 The first level introduced me to the fast-paced casual gameplay of Aliens & Farm and after a little while I was getting into the swing of things. It's fun, without being too complicated, which is always nice. If you get good at the game, you'll also acquire combos if you're quick enough to pick off a couple of Aliens in quick succession. 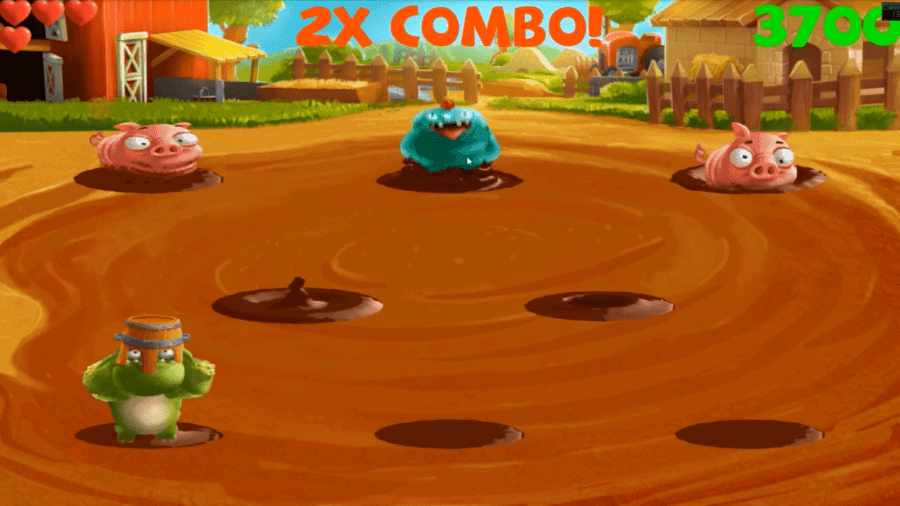 At the end of each level you're given a score as well as a percentage of how accurate you were. Which is basically how "on target" your taps on screen were. 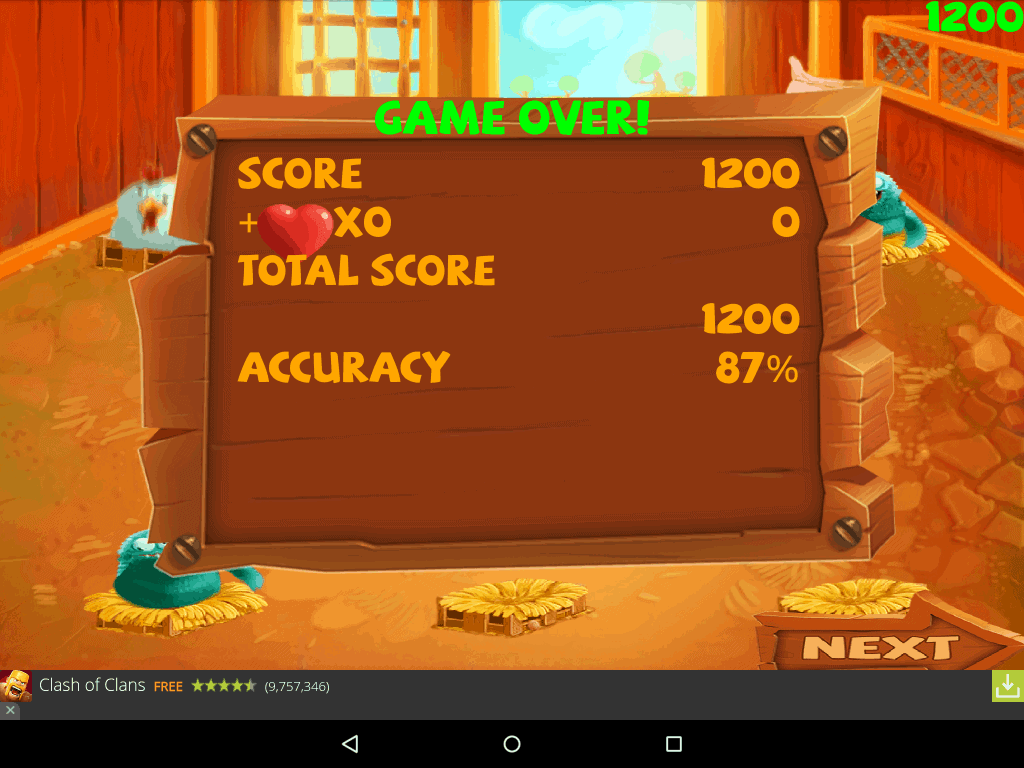 Once I had spent some time with the single player levels I went to try my hand at the survival mode, and this is sort of like playing an endless runner game. You keep on going and going, and this can be addictive, especially once you get good at the game and familiar with the different Aliens and then unique attributes. 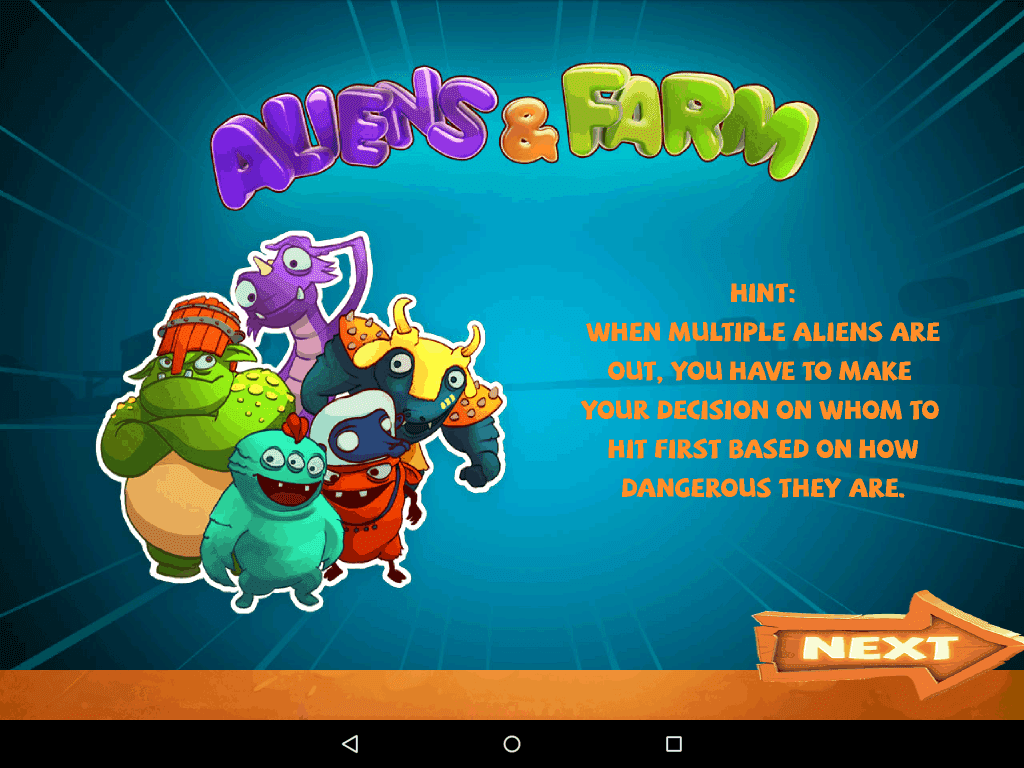 As I touched on above, there's support for leaderboards through both Google+ and Facebook, and I like the way this is integrated. It's not too pushy at all, and it's nice, casual competition. 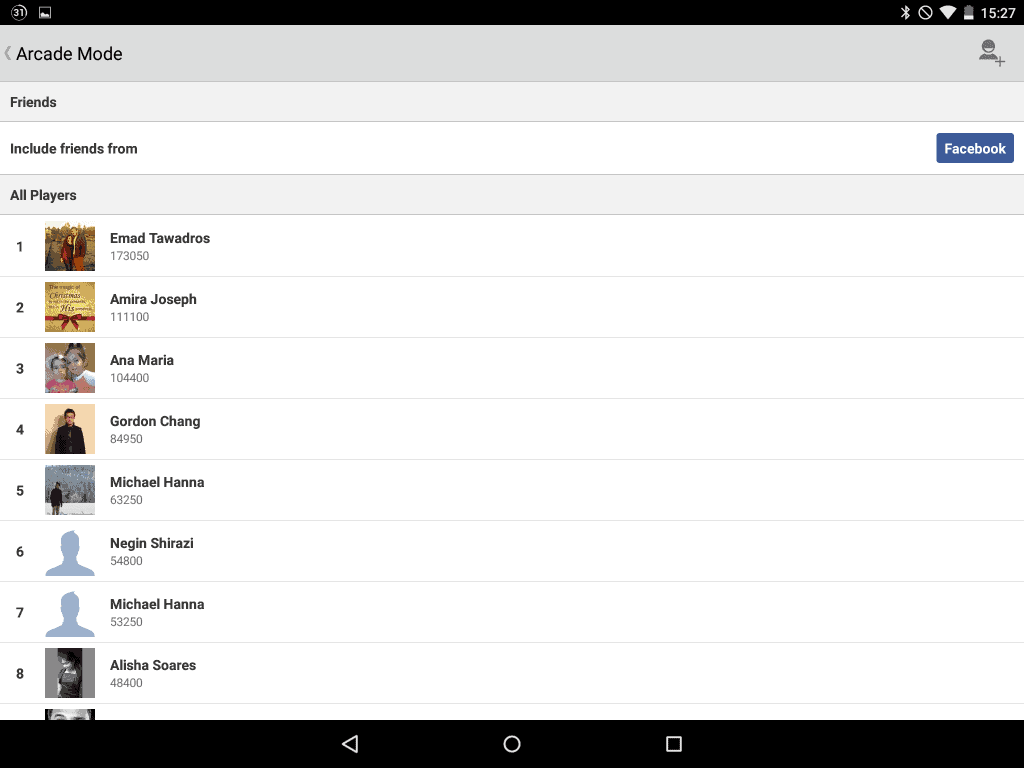 While Aliens & Farm is a game based around a whack-a-mole style of play, there's a lot on offer here that make it a lot more than that. Sure, there's a pretty simple mechanic at the heart of things, powerups and combos keep things fresh for players. While I found the game to be challenging at first, I soon grew into the play style and once I was familiar with the Aliens and their particular defenses I found myself succeeding a little more. I enjoyed the introduction of Aliens at the beginning of the levels and while I do wish there was more to the backgrounds here, the character design is detailed and fun. Overall, I didn't see too much to complain about here, and once you look past the simple gameplay mechanics, there's a lot to love here. It's a challenging, simple game that doesn't try too hard to be anything more than it is.

If you're looking for something that's simple, fun and doesn't ask too much of its players, then Aliens & Farms is well worth taking a look at. There's no denying it's a simple game that focuses on a mechanic many of us have seen before, but there are added powerups, combos and more to keep the game feeling fresh and somewhat addictive in parts. The survival mode adds a layer of replayability and offers a nice challenge once you've played through the main levels. A fun, free and easy to understand game, Aliens & Farm is what it is; good, simple fun.