TouchPal is an emoji keyboard for Android that offers a better emoji experience for users by presenting them with easier access to all their emoji, emoji art which are images made up of emoji and more. It's not just about being an emoji keyboard however, as TouchPal strives to be a great keyboard overall. It's an extremely quick keyboard, with great word prediction, lots of settings and the ability to swipe over keys to form words, quickly get suggestions using features like TouchPal Wave and Symbol Gesture, too. There are also over 100 themes available, 80+ different languages and 900+ emoji to choose from. TouchPal sure seems like a competent keyboard alternative on paper, so let's go ahead and see how it shapes up in our review.

As with other keyboards app on Android, TouchPal's emoji keyboard just needs to be downloaded from the Play Store, and a quick set up is needed after that. 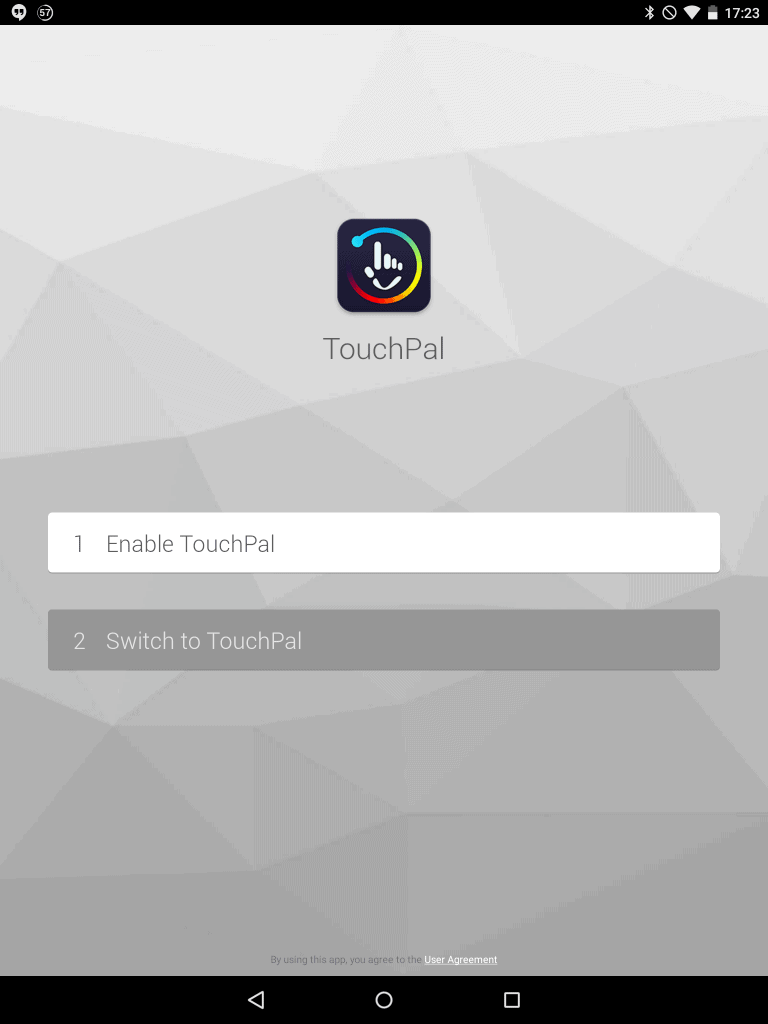 Once you've got the keyboard set up, which is nice and quick, it's a good idea to choose a theme of your liking. Luckily, there's a good deal to choose from, which is nice. Here I'm going to use it on my Nexus 9 – I never could get along with the stock Android 5.0 keyboard – so I chose something to blend in with Lollipop. 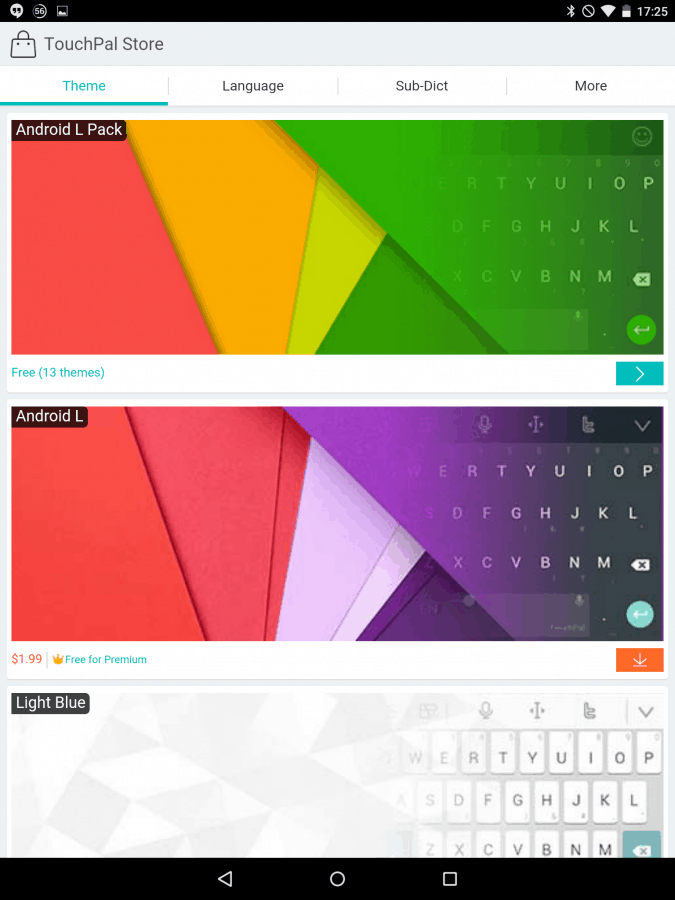 In the TouchPal store, you can also purchase dictionaries and sub-dictionaries with more regional language, which I thought was a great way of saving even more time suing the word prediction. 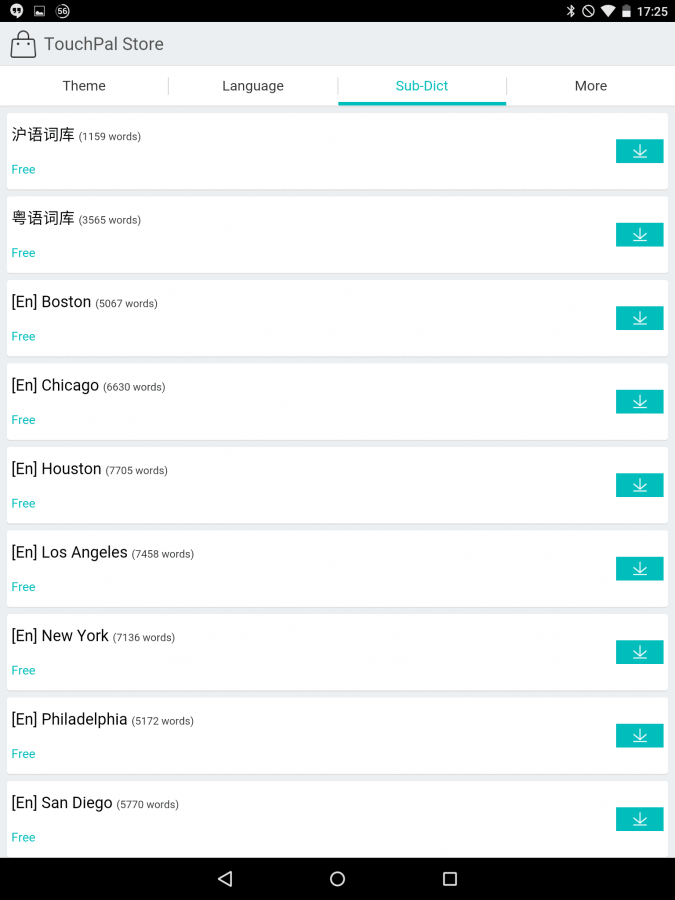 After I had a few things set up the way I liked them, I went ahead and tried out the keyboard, and as you might have expected, the emoji keyboard here is really quite nice. You get a much larger view of emoji here, with more of them on display. This makes it quicker to choose the emoji that you were looking for. I love using emoji, especially with the staff here at Android Headlines, but finding certain ones can get a long time with other keyboards. With TouchPal, it's nice and easy to find the emoji that I'm looking for. 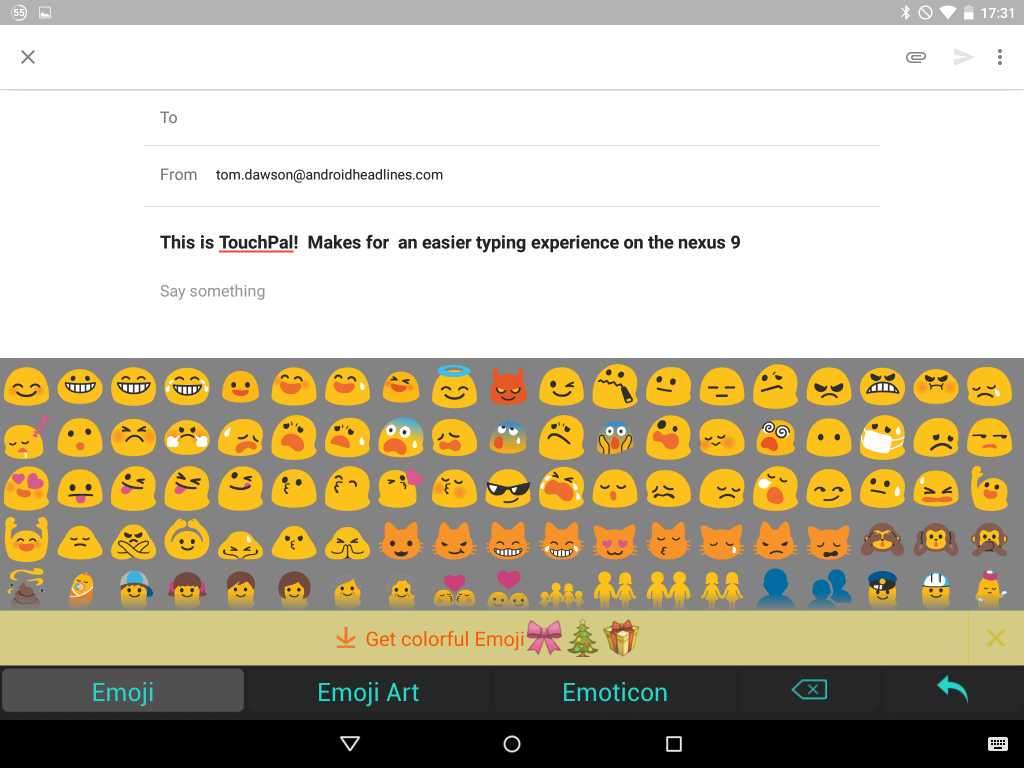 A headlining feature of TouchPal is Emoji Art, fun images that have been put together using the new style of emoji that debuted with Hangouts, and they all look great, too. 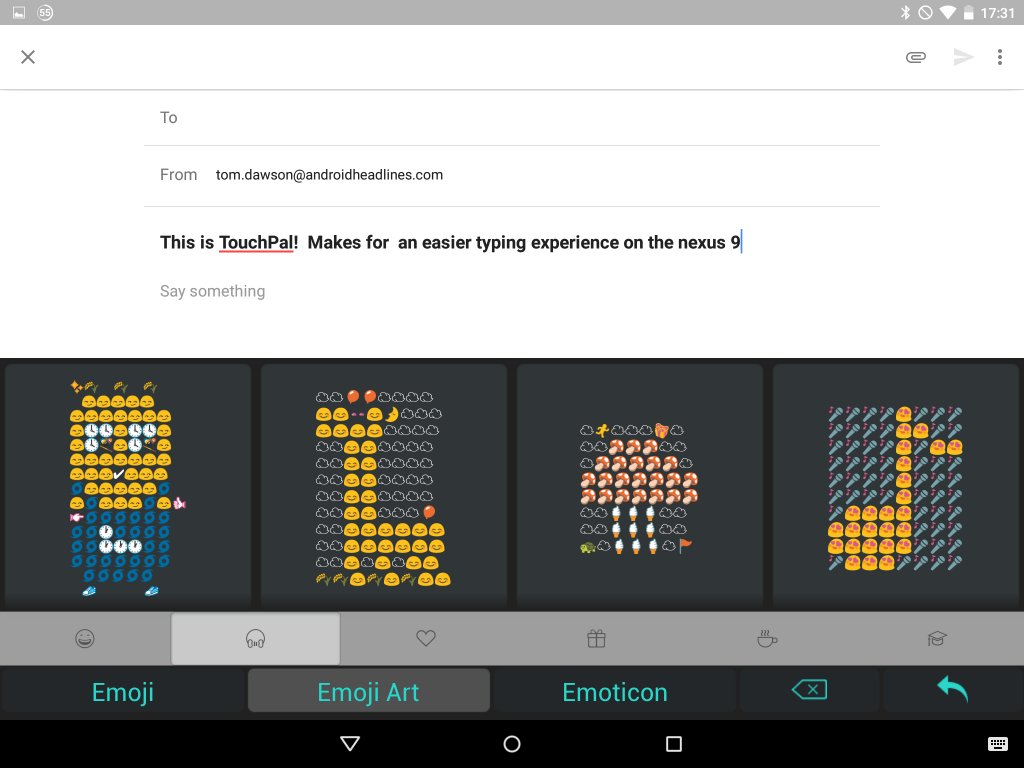 What I liked about TouchPal however, was not so much the emphasis on emoji, but the fact that it's a decent typing experience as well. This is a much better way to type for me on my Nexus 9, the keys are larger, it's definitely a quicker keyboard and word prediction is really nice and quick as well. Little tricks like this below also make it easier to perform actions like Copy and Paste, too. 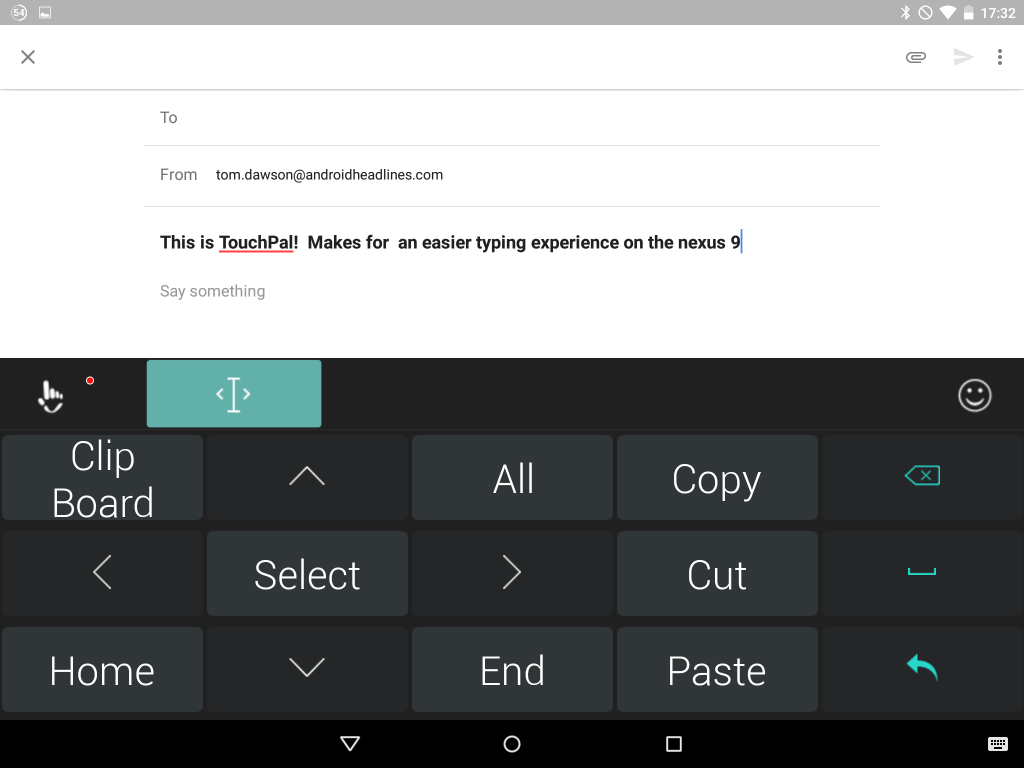 There are other nice features to TouchPal though, like the Symbol Gesture feature that makes it easier for people to get access to symbols and such on the keyboard. 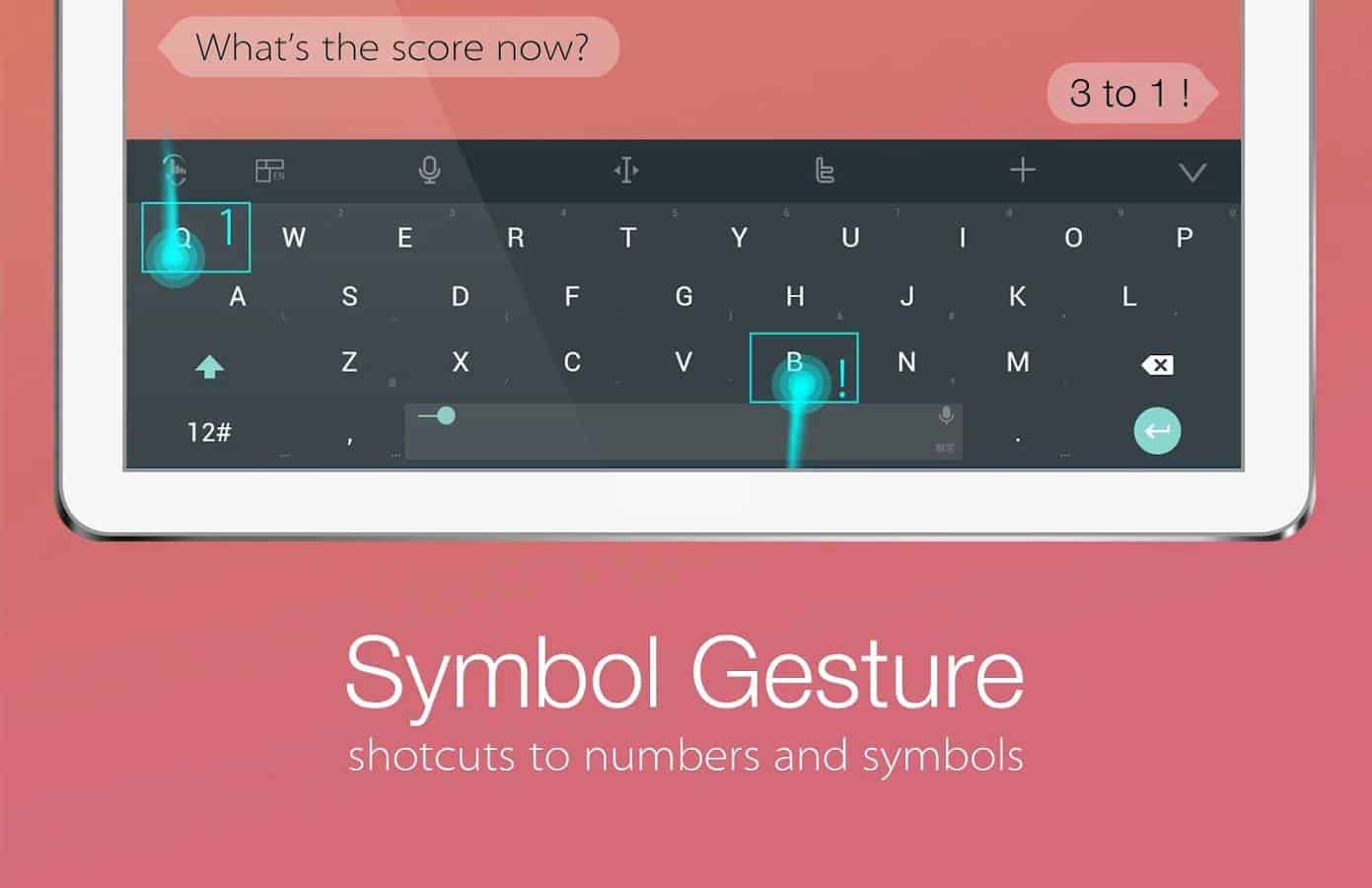 A feature that fans of keyboards like Swipe will enjoy is the Touchpal Wave feature, which allows you to complete sentences a lot quicker. This works quite well thanks to the fairly decent word prediction and the overall speed of the keyboard as well. 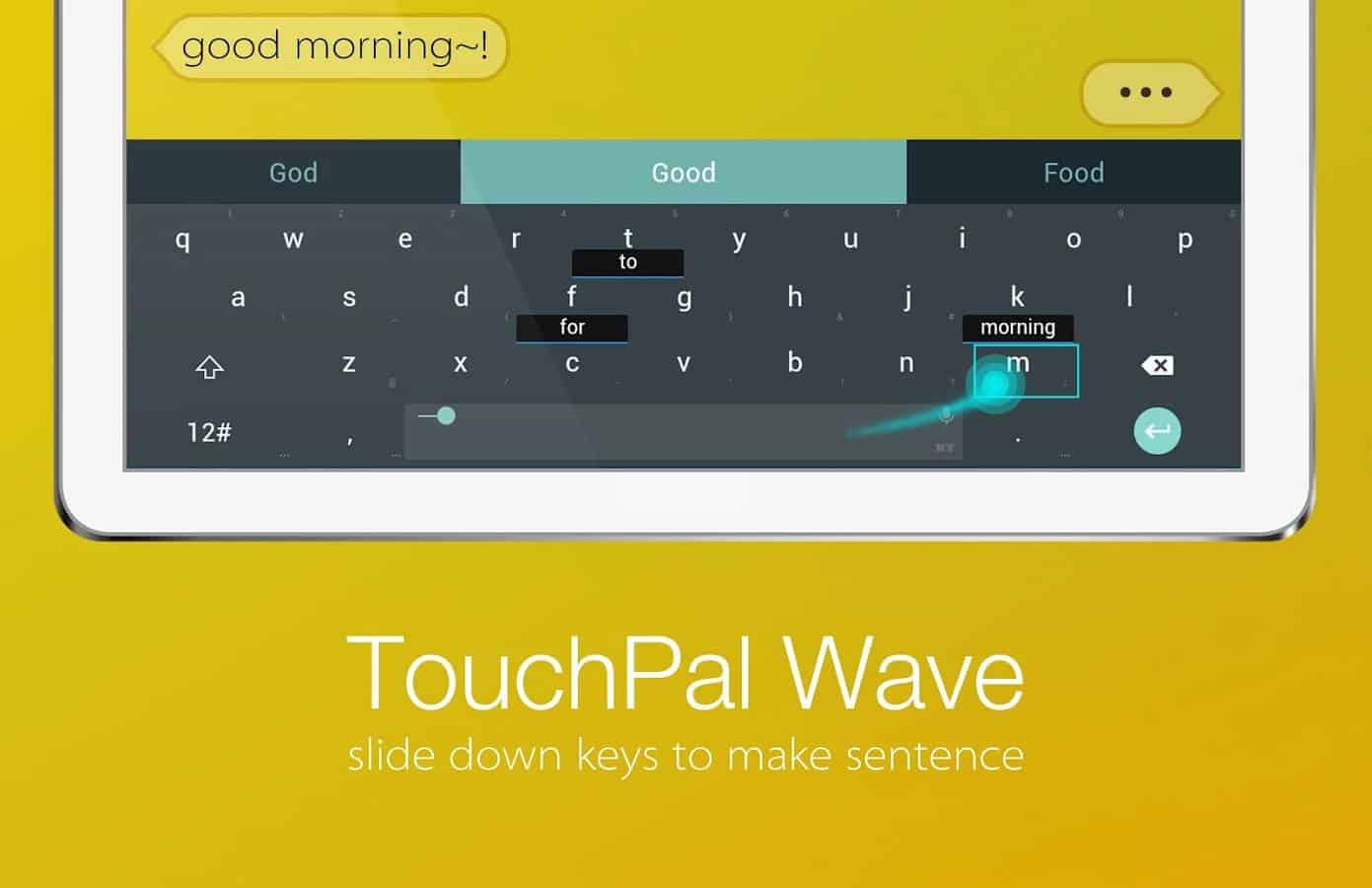 TouchPal was a nice surprise for me, not only is it a great emoji keyboard, but a good Android keyboard overall. For me, personally, this is a big upgrade over the narrow, cramped keyboard that came as default on the Nexus 9 and it blends in out of the box with Android 5.0 brilliantly. Unlike the costly themes of SwiftKey, I can easily choose a theme from the 100+ available that doesn't cost much at all. Also, I appreciated the ability to change the size of the keyboard to exactly as I wanted it, rather than the limited movement that's offered by other keyboard apps. TouchPal is not only a great Android keyboard, but a fun emoji keyboard as well, with lots of emoji and emoji art available for users to try out and it's just a lot of fun. It's quick, easy to use and a big upgrade over many default Android keyboards.

All-in-all, TouchPal is an excellent emoji keyboard that definitely delivers there, with over 900 different emoji shapes and styles to choose from. However, more than that, TouchPal is an excellent keyboard regardless of whether or not you're on a tablet or a smartphone. It's packed full of features that make typing quicker, more efficient and genuinely fun again. It's even available on iOS if that interests you. A quality keyboard app that has gotten much better over time, TouchPal works well, is speedy in general and is well worth trying out.