Now CES is over we finally have clarity on a lot of announcements and releases. Prior to the event kicking off, we heard plenty of rumors about what might show up. Now, we know what did show up and what did not make an appearance. One of the devices, which was rumored to possibly be in attendance was the Sony Xperia Z4. However, the newest addition to the Sony Xperia line did not materialize. As such and now the event is over, the rumor mills are very much back in motion. As we 'know', the next Sony flagship device should be the Sony Xperia Z4. Along with the main device, we were also hearing about a number of variants which should be landing. These so far have included the Sony Xperia Z4 Compact and the Sony Xperia Z4 Ultra. Well, if today's rumors are to be believed then it also looks like we might have another Z4 device coming in the guise of the Sony Xperia Z4 Music.

It probably won't need too much explaining, but a device being dubbed as a 'Music' variant will be highly focused on music. During Sony's keynote presentation, we did get to hear a bit about how they plan to focus on Hi-Res audio and this seems to be an example of that, with the Z4 Music being a Hi-Res Walkman music smartphone. The Z4 Music will be able to playback a whole host of audio formats including dss, wav, aiff, flac and more. The frequency response on offer included 20Hz up to 42,000Hz. While the device will also include an S-Force PRO front surround speaker with S-Master which will come with 6 audio modes. As well as an emphasis on quality sound the Z4 Music also comes with some interesting specs. The Z4 Music will reported come with a 4" IPS display with a 1440 x 720 resolution. Inside the Z4 Music will be equipped with 3GB RAM and powered by a Qualcomm Snapdragon 801 processor (clocked at 2.3GHz). In terms of cameras, the Z4 Music will be equipped with an 8MP Exmor RS rear shooter. There was no mention of front facing options. Additional features worth noting include a 2,000mAh battery. In terms of memory, it is reported the Z4 Music will be available in a 32GB variant which will come in black and also an 128GB variant which will be available in silver purple, gold and green.

Unfortunately, price and availability still remains a mystery. As this is a Z4 variant, it would be expected to now be launched along with the rest of the Xperia line in March at the Mobile World Congress (MWC) event in Barcelona. In terms of price, it is not clear how much this Music based smartphone will be. However, at CES, we were introduced to the new Sony Walkman which runs on Android and that beast cost a whopping $1100. It is unlikely this one will cost that much, but you never know. 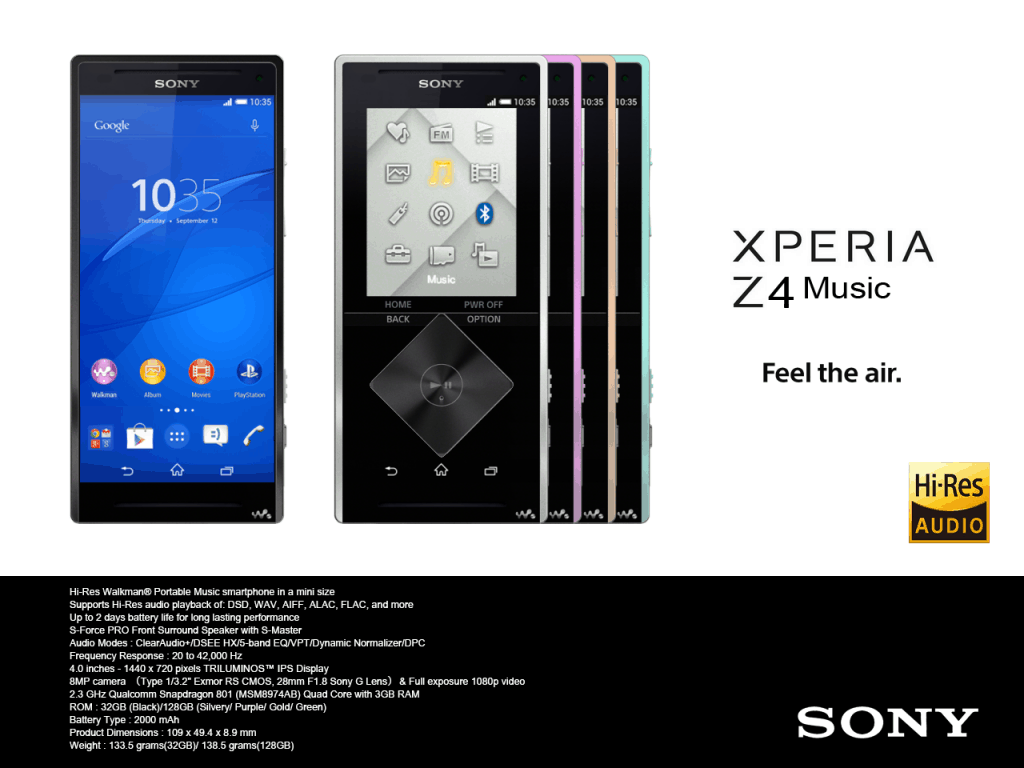