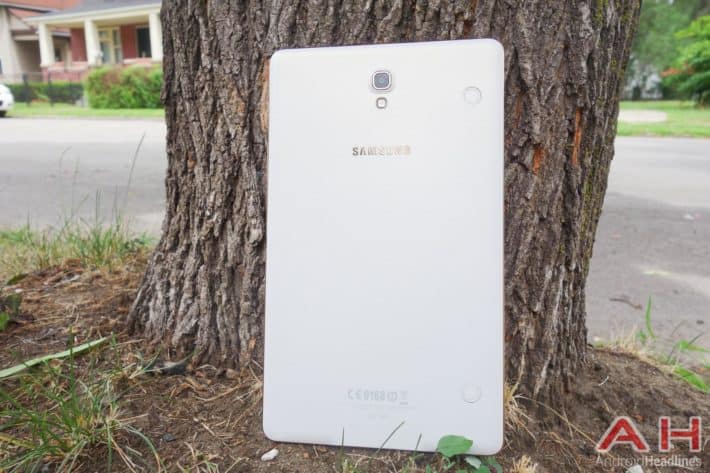 Samsung is known for releasing a whole lot of choice into the market, and their approach to tablets is no different than their approach to smartphones; the more, the merrier! In all seriousness, Samsung did release a lot of tablets last year with the Galaxy Tab 4 line, the Galaxy Tab Pro line and the Galaxy Tab S line, all of them featuring numerous different sizes and specifications. The Galaxy Tab S line however, came in two sizes and aside from the carrier versions, the 8.4-inch and 10.5-inch versions were easy to choose between. Not only were they good looking, but they were also packed with the best displays on the market thanks to Samsung's Super AMOLED technology.

It looks like Samsung might be ready to introduce a new Galaxy Tab S, dubbed the 'Galaxy Tab S Pro' or at least that's what the latest update to the Milk Music listing in the Google Play Store strongly hints at. The Milk Music app was recently updated with support for more Samsung devices, and it appears like the new update also included devices that have yet to be released. With Mobile World Congress around the corner, they could be looking to announce and introduce the new Galaxy Tab S in Barcelona, which would certainly make sense. Either that, or they're gearing up for yet another event of their own, perhaps yet another Mobile Unpacked event. With no hint at what the device could be, the 'Pro' moniker could be the same sort of thing as the Galaxy Note Pro 12.2,where the 'pro' meant a larger and more powerful tablet.

This could be just a typo on the developer of Milk Music's part, but it's more likely that Samsung has at least one tablet in the works for a release sooner, rather than later. Last year Samsung introduced the Galaxy Tab Pro lineup during CES 2014, yet there was nothing from Samsung on the mobile front this year in Las Vegas, so perhaps Mobile World Congress to be Samsung's biggest we've seen in years. Do you think this is going to be something larger like the 12.2-inch Galaxy Note Pro or something beefier in the specs department?