Smartwatches are a big deal this year. If you don’t know someone who has one then you at least probably know someone who wants one. It seems we as consumers cannot get enough of the new watch wearables that have arrived. As such, we have seen an abundance of new smart watches hitting the market over the last twelve months. In fact, most of the action has occurred in the last six months, with numerous big OEMs showing their hands at what they can offer the wearable market. Since then, the market has further expanded with a number of other companies also looking to get their foot in the new and emerging tech market. A lot of these newer companies are companies you might not expect to be releasing a smart watch which had made it even more interesting.

That said, we are hardly ever surprised by what is released. If it is a big device then we normally hear rumors, leaks or see shots before the device is announced. Therefore, announcements are quite often a formality. However, it seems today at CES a ‘new’ smartwatch has been spotted. To be perfectly clear, it is not obvious what the watch is, but as you can see in the image below the watch does come with a unique looking watch face. An Audi watch face actually. That is because it was at the Audi Press Conference today at CES where the watch was spotted.

At the Audi conference, the car company announced a bunch of partnerships with major tech companies like LG and Samsung. One of the announcements being made was that Audi had partnered with LG for the technology used in their announced ‘Android Wear compatible in-car systems’. During the demonstration, it was the mystery watch being used by Audi board member Ulrich Hackenberg which is catching the headlines. The watch actually looks like quite a high end one, with a real close-to-watch look and premium looking leather strap. Not to mention the use of the three buttons on the side further highlights this watch’s more watch-like feel than we currently see on other Wear offerings. Of course, this could have been a one-off watch made just for Audi and the demo. But it also could be something that might be landing soon from LG? What do you reckon? 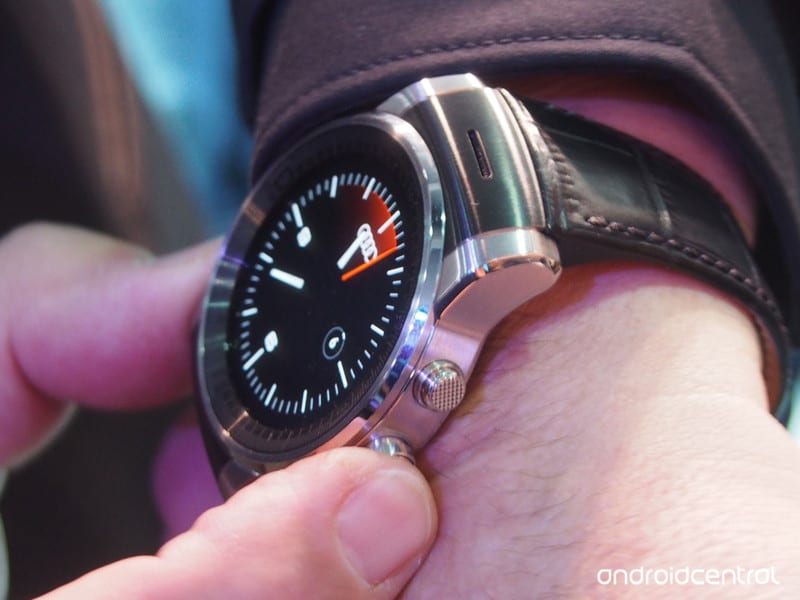