Do we have a good one for you today – The new Samsung Galaxy Note Edge goes up against a favorite of the tech world, the HTC One M8…yes, I know that HTC is on the verge of announcing its new HTC One M9, and that will get compared as well, but right now the HTC One M8 is their flagship.  Surely you must be interested in how well the old stacks up against the new?

The HTC One series started the 'metal revolution,' with the entire body being made from aluminum, and challenged every manufacturer since that time to provide a metal body.  Although metal looks great, there can be a few drawbacks – antenna reception, extreme cold or hot, dents, scratches, and the ability to grip it securely are a few drawbacks.  Most high-end devices today are combining the best of both worlds – a full metal frame and trim for strength, while using another material for the actual backing.

As would be expected, there are very few similarities between these two devices other than that they both offer a microSD card slot for additional internal storage.  They both have the Dual-Band Wi-Fi, Bluetooth v4, NFC capabilities, a microUSB v2.0 connector, metal frame and IR Blaster.  They both are still using Android 4.4.4 KitKat with their own overlays and both are available on all major US Networks.

Please look at the detailed Specifications listed below to see exactly where these two devices differ from one another.  We will then look at each individual device, pick up some pros and cons, and see if we can determine a winner in this comparison of specifications and device features.

The Samsung Galaxy Note Edge, is a combination of the Galaxy Note series- S-Pen, large display and a premium metal design – but also adds a touch of innovation with the curved display on the right hand side.  It not only makes the Galaxy Note Edge look awesome, but it truly does add a real practical use for developers to create options, buttons or whatever they feel will add to their application.

The Galaxy Note Edge sports a 5.6-inch QHD Super AMOLED display with a resolution of 2560 x 1440 x 160 (the curved edge) and 524 pixels-per-inch (PPI.)  The HTC One M8 has a 5-inch FHD display and 441 PPI that are not as sharp as the Galaxy Note Edge.  The Note Edge (US version) uses the next generation Qualcomm Snapdragon 805 quad-core processor clocked at 2.7GHz, while the HTC One M8 is still using the older Snapdragon 801 quad-core clocked at 2.3GHz – both are great processors, but the 805 caters to the QHD display, battery life and better graphics.

The Galaxy Note Edge uses 3GB of RAM versus the 2GB found in the HTC One M8 although that extra 1GB is probably needed to help with TouchWiz!  The Note Edge also uses 32GB as standard internal storage with a microSD card slot for added expansion.  The HTC One M8 comes in 16GB and 32GB of storage, but can also be increased via an expansion card.  The Galaxy Note Edge packs a 3000mAh sized battery versus the only a 2600mAh battery in the HTC One M8, but even with the difference in battery size, each device will certainly see you through an entire day's usage.

The camera on the Galaxy Note Edge was really improved this time around by increasing the sensor to 16MP.  They added autofocus, an LED Flash, they finally included OIS, their own ISOCELL technology and the ability to take live HDR shots.  HTC took a different approach on the One series – a 4MP UltraPixel affair with a Duo Camera that is discussed in more detail under the HTC One M8.  The front-facing camera (FFC) on the Galaxy Note Edge is smaller, at 3.7MP and with a wide-angled lens, you can fit more people in your selfies or video chat than the 5MP FFC on the HTC One M8.

The Galaxy Note Edge has many extras, some that are a great idea and others that some people may never use – it has VoLTE and Wi-Fi Calling capable, LTE Cat 6 (if you can find it), three microphones for noise cancellation and better sound, download booster, a fingerprint scanner, heart rate sensor and UV, Oxygen Saturation sensor and Samsung's UPSM (Ultra Power Saving Mode.)  Of course, the S-Pen and all of its software and its uses are enjoyed by the Galaxy Note Edge, as is the 'Edge' display for added functionality.  The Note Edge is running Android 4.4.4 KitKat and is available on all four major US carriers.  It will run you a steep $399 on a two-year contract and about $850 off-contract.

Let's take a closer look at the HTC One M8.  The first thing you notice is its striking good looks, comfortable to hold with its round back, and those large bezels – the top and bottom ones really could not be helped because of the large dual speakers…you get great sound, but a sacrifice must be made.  The speakers also make the device taller than your typical 5-inch display.

The HTC One M8 sports a 5-inch FHD Super LCD3 display with a resolution of 1920 x 1080 pixels and a respectable 441 PPI.  Because of its resolution and LCD technology, the display simply falls short of the Galaxy Note Edges QHD display…not to mention the extra 'Edge.'  The HTC One M8 uses the tried and true Snapdragon 801 quad-core processor clocked at 2.3GHz with 2GB of RAM and 16GB or 32GB of internal storage with room for expansion.  The Note Edge's Snapdragon 805 quad-core processor is the next generation processor, but is still 32-bits and some of its benefits relate to the display, battery life, and graphics capabilities.

HTC chose a different path with its main camera – one that involves using only 4MP, but calling them UltraPixels, and adding a second, or Duo camera, to help with the depth of certain photos, not in their overall quality.  It can be a little awkward to use, but the results are decent enough for posting pictures on the web, but not for enlarging and printing out to share.  The 5MP FFC is a nice, large sensor and takes great social media selfies or for video chatting.  The main camera just cannot compare to the specs or photos from the Galaxy Note Edge.

The HTC One M8's 2600mAh battery is smaller than the larger 3000mAh battery in the Galaxy Note Edge, but certainly sufficient in our review to last a full day.  It also shares an IR Blaster with the Note Edge, but also includes the front-facing dual BoomSound speakers, a Stereo FM Radio, HD Voice (which it got with its 4.4.4 upgrade) and a TV-out plug via a MHL A/V Link.  It is available on all major US carriers, for as little as $99 on a two-year contract. 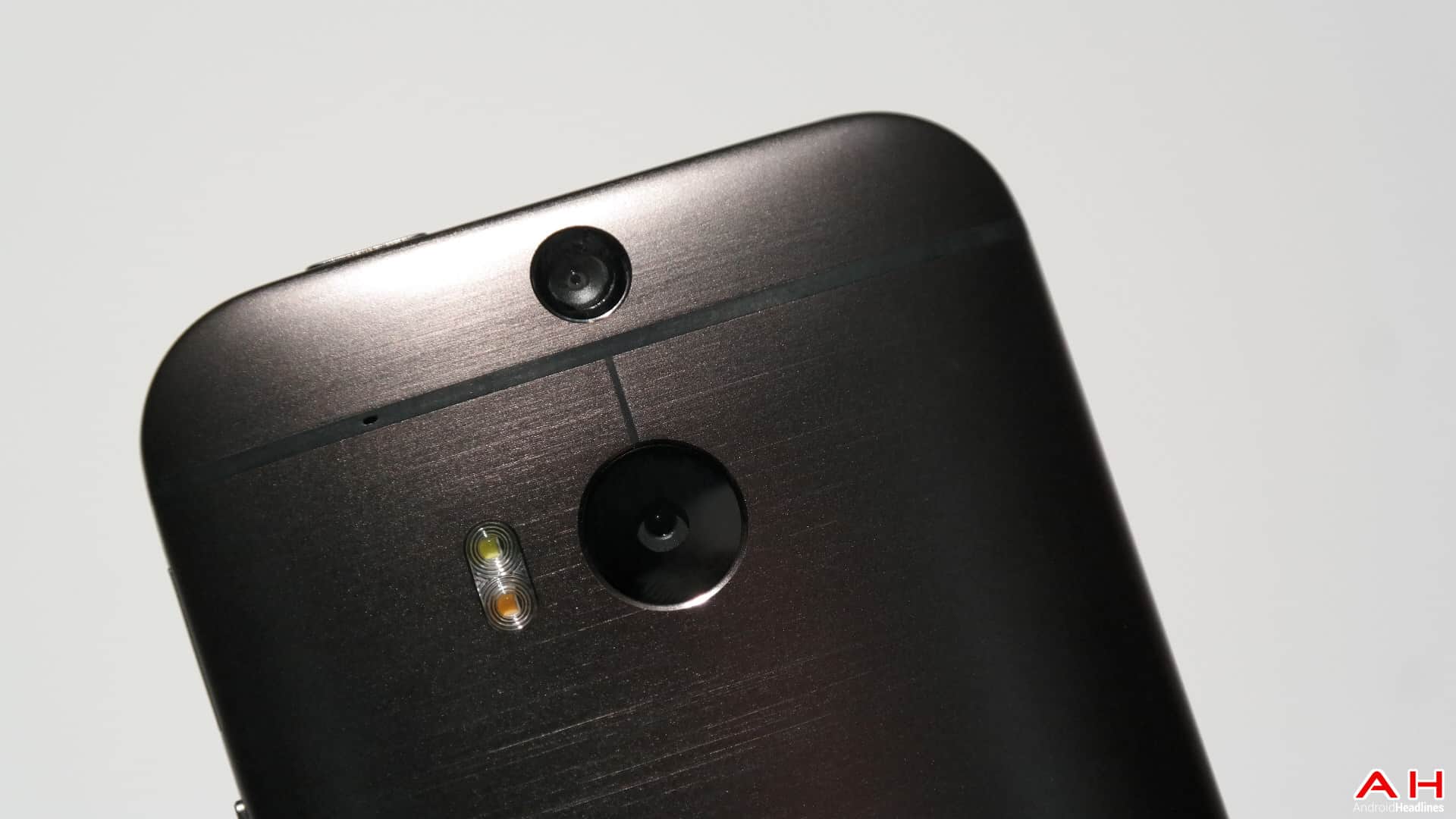 Okay, this is another comparison where price enters into the picture, because there is no way on God's green earth, that the Samsung Galaxy Note Edge is not the better device when it comes to specifications, and I would even argue design.  However, when you consider the fact that the Galaxy Note Edge requires a better processor, requires more memory for TowchWiz and bloatware, that many users do not want the S-Pen (or heart rate sensor, UV or Oxygen sensors) and then there is the $400 price tag – all of a sudden the HTC One M8's $100 price tag looks pretty good.

The HTC One M8 gives you a beautiful metal body, FHD display, a Snapdragon 801 processor, a microSD card slot, decent cameras, an IR Blaster, HD Voice, dual front-facing stereo speakers with BoomSound, and is on the verge of its 5.0.1 Lollipop update…all for about $100 on a two-year contract, it looks pretty damn good.  If you want to spend $400 on the Galaxy Note Edge, you will own one of the most advanced smartphone/phablets on the market and you should be very happy – I know that I would…but is it worth and extra $300?

Please hook up with us on our Google+ Page and let us know which one of these device you would pick as the winner in this comparison and WHY…as always, we would love to hear from you!

Trusted By Millions
Independent, Expert Android News You Can Trust, Since 2010
Publishing More Android Than Anyone Else
3
Today
61
This Week
584
This Month
584
This Year
102064
All Time
Advertisement