Boy do we have a good one for you today – the newest LG G Flex 2 goes up against the original LG G Flex.  Now I know what you are saying, "How can a year old device possibly beat out the newer version"…and I know that is the nicest thing you could say.  What we are doing here is simply showing you the differences between the two devices – what areas did LG improve or make changes to this device.  If LG did their homework properly, then certainly the LG G Flex 2 should win this comparison…but are the improvements enough to warrant the purchase of this first mass-produced flexible smartphone sold in the US.

Because these smartphones are the same model, only updated, they do have a few things in common.  They both have 32GB of internal storage – the G Flex 2 does have a 2GB/16GB model, however, the only one offered by the US carriers is the 3GB/32GB model.  They both offer a 13MP main camera with autofocus (the G Flex 2 has Laser Autofocus), and LED flash (the G Flex 2 has Dual-LED) and they both have a 2.1MP front-facing camera (FFC).  They are fairly close in size with the original G Flex about 4/10-inch larger and 25 grams heavier.  Both of the G Flex have the dual-band Wi-Fi, Bluetooth, NFC capabilities, curved body and display, the self-healing back, an FM Stereo Radio and an IR Blaster built-in.

Please look below at the detailed specification sheet and you will be able to see where these two devices differ – now some things like pricing was not yet available, but it is rumored to have the same $300 pricing on a two-year agreement.  So far, we know that AT&T, Sprint and US Cellular have all claimed that they would sell the LG G Flex 2 and on LG's website it shows both AT&T and Sprint logos.

After the specifications, we will take a closer look at the individual devices and list some of their pros and cons to help us justify our pick as the winner of this comparison. 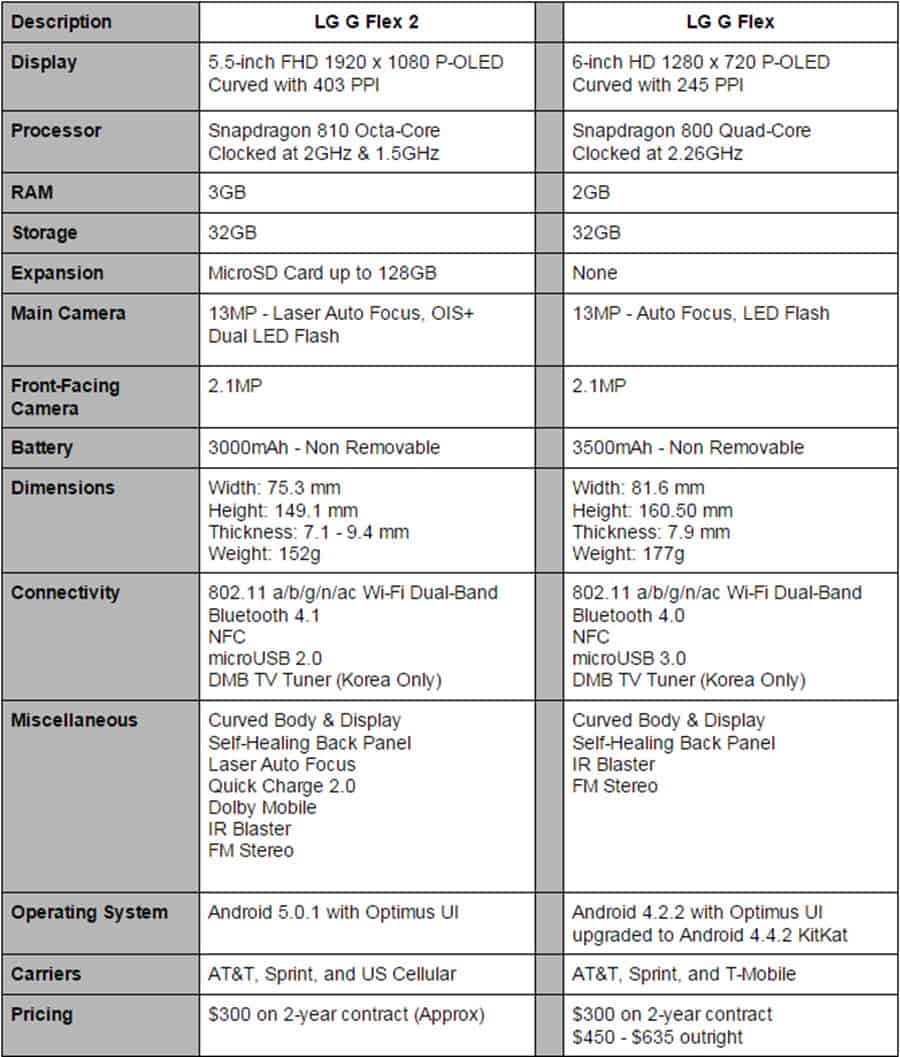 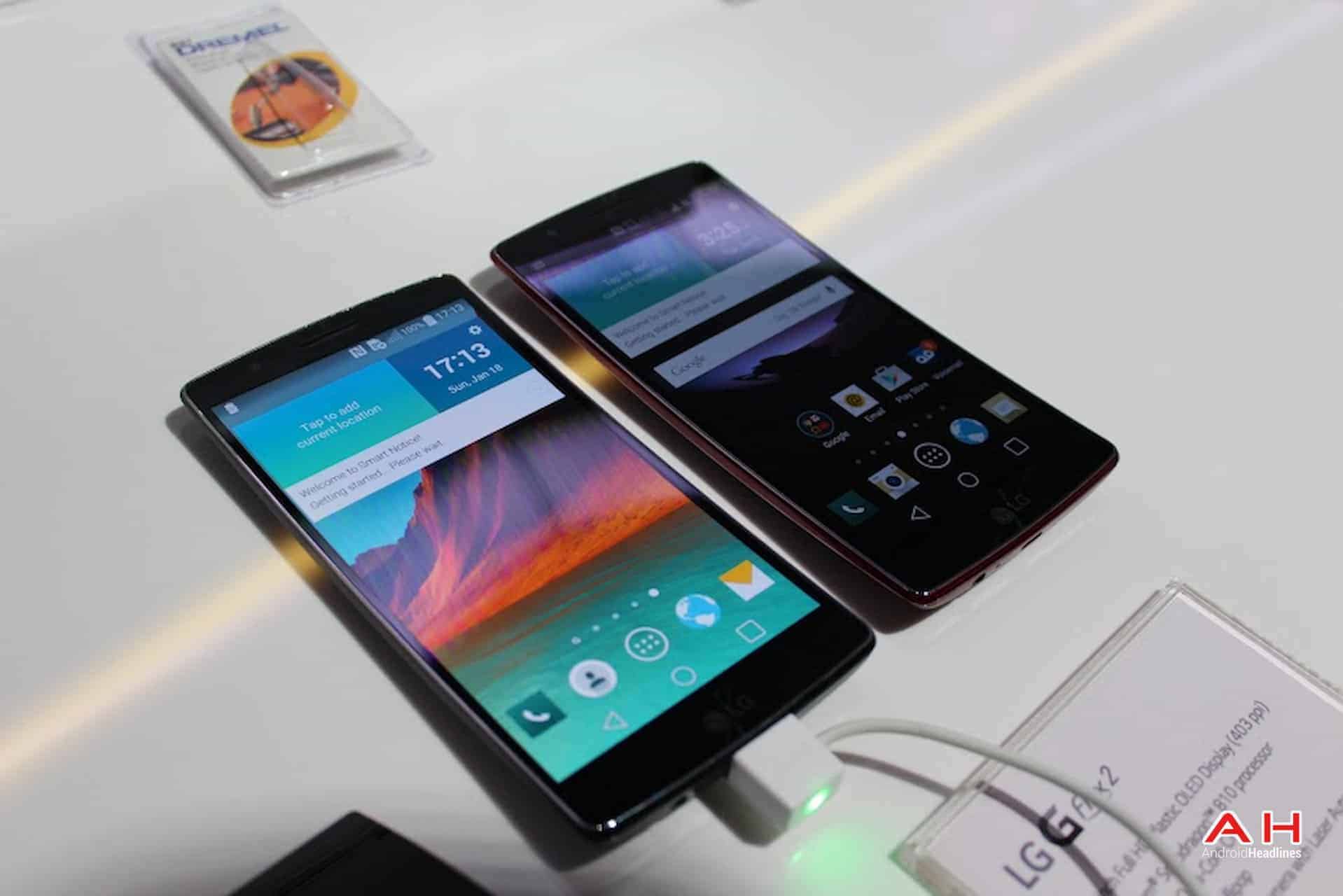 Since there were many things similar between these two devices, the detailed sections will be a little shorter than usual.  The LG G Flex 2 is simply an upgrade to the popular LG G Flex, which means it is a sharp looking smartphone, built like a rock and upgraded in all of the areas that I felt the original was lacking.

The beautiful Plastic OLED display that already offered great contrast is now a FHD model with a resolution of 1920 x 1080 pixels and 403 pixels-per-inch (PPI) – up from the paltry 245 PPI of the original.  The processor jumps from the Qualcomm Snapdragon 800 in the original, past the current 805 model, all the way to the 64-bit Snapdragon Octa-Core 810.  The RAM also jumps from 2GB to 3GB in the US models and they both carry 32GB of internal storage, although the new G Flex 2 also has a microSD card slot to expand its internal storage so you can keep your music, videos, movies and pictures directly on your device.

LG also upped the camera area considerably – although they stuck with 13MP for the sensor, they added the Laser Autofocus from the LG G3, gave it a Dual-LED flash, and added Optical Image Stabilization (OIS+.)  The 2.1MP FFC for social media selfies and video chatting stayed the same.  The battery did drop in the new LG G Flex 2 from 3500mAh to 3000mAh, although it should still get you through a full day.

As far as other items, the LG G Flex 2 has – it did move up to Bluetooth 4.1 as well as moved back to the microUSB 2.0.  Because of the Snapdragon 810, it also features Quick Charge 2.0 that allows you to get to a 50-percent charge in 40 only minutes.  It also ups the sound quality a bit by including Dolby Mobile.  The newest G Flex 2 also sports the newest in the Android OS, 5.0 Lollipop, and best of all it looks like it will cost the same as the original. 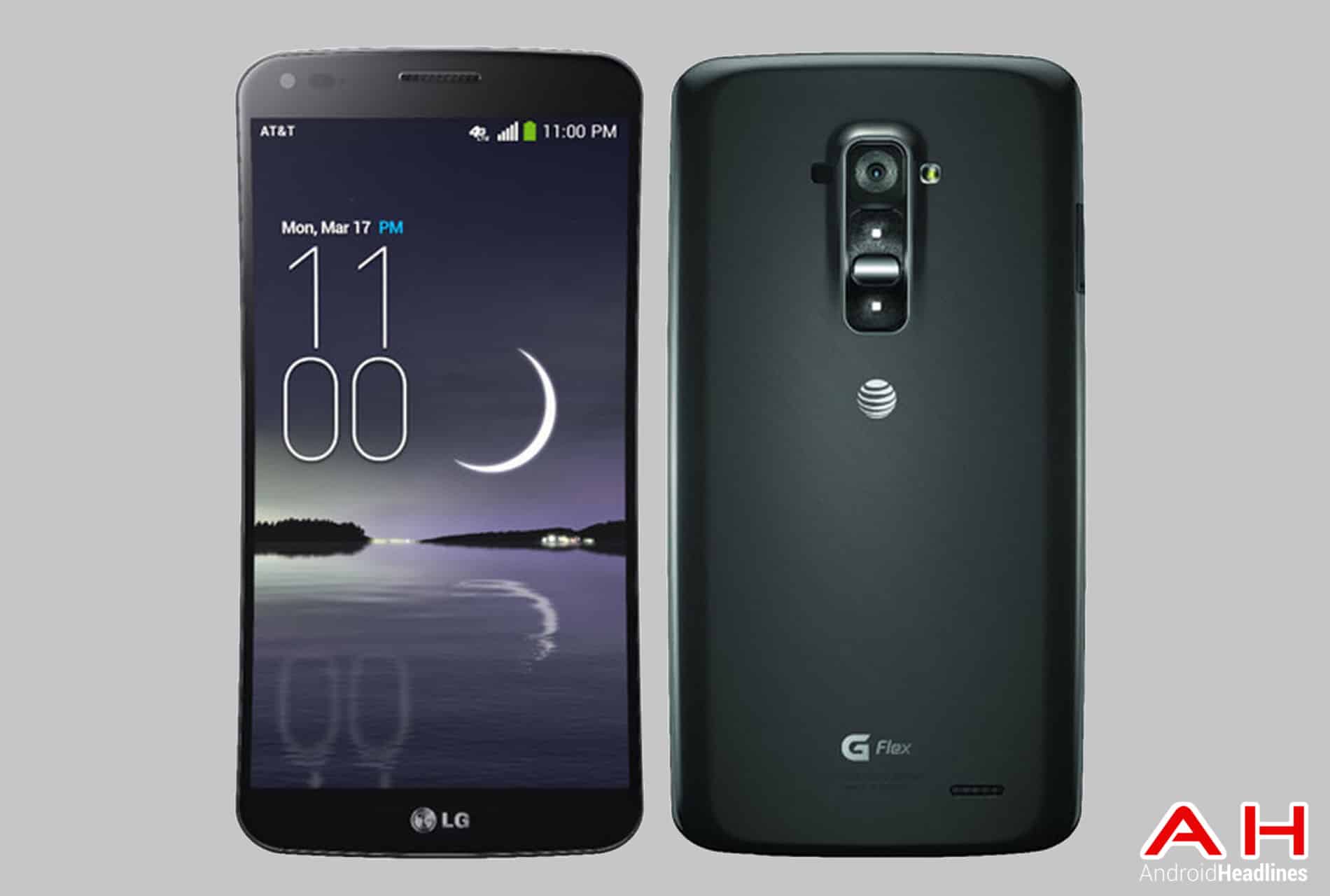 To be honest with you, the original LG G Flex did nothing for me – so it was curved, but spec-wise, I was not impressed…and I know that my boss is grinding his teeth and clenching his fists because that was one of his favorite devices.  I have to admit that I liked the looks of it, but just saw no purpose for it – I suppose if you keep it in your back pants pocket, the curve would be nice.  But I keep my smartphone in my shirt pocket – always  – and until I start wearing a manssiere  (which could be any day), I just don't need the curve.

The camera took decent enough pictures, but the G Flex 2 has really up its game with Laser Autofocus, a dual-LED flash and OIS+. The original G Flex does have a huge 3500mAh battery, but the slightly smaller and lighter G Flex 2's 3000mAh battery should be more than ample to get it through the day.  The original device really has nothing that the newer model does not have; in fact, it is still running Android 4.4.2 KitKat and AT&T still wants $300 on a two-year contract, although that should certainly drop soon to make room for the new and improved LG G Flex 2. 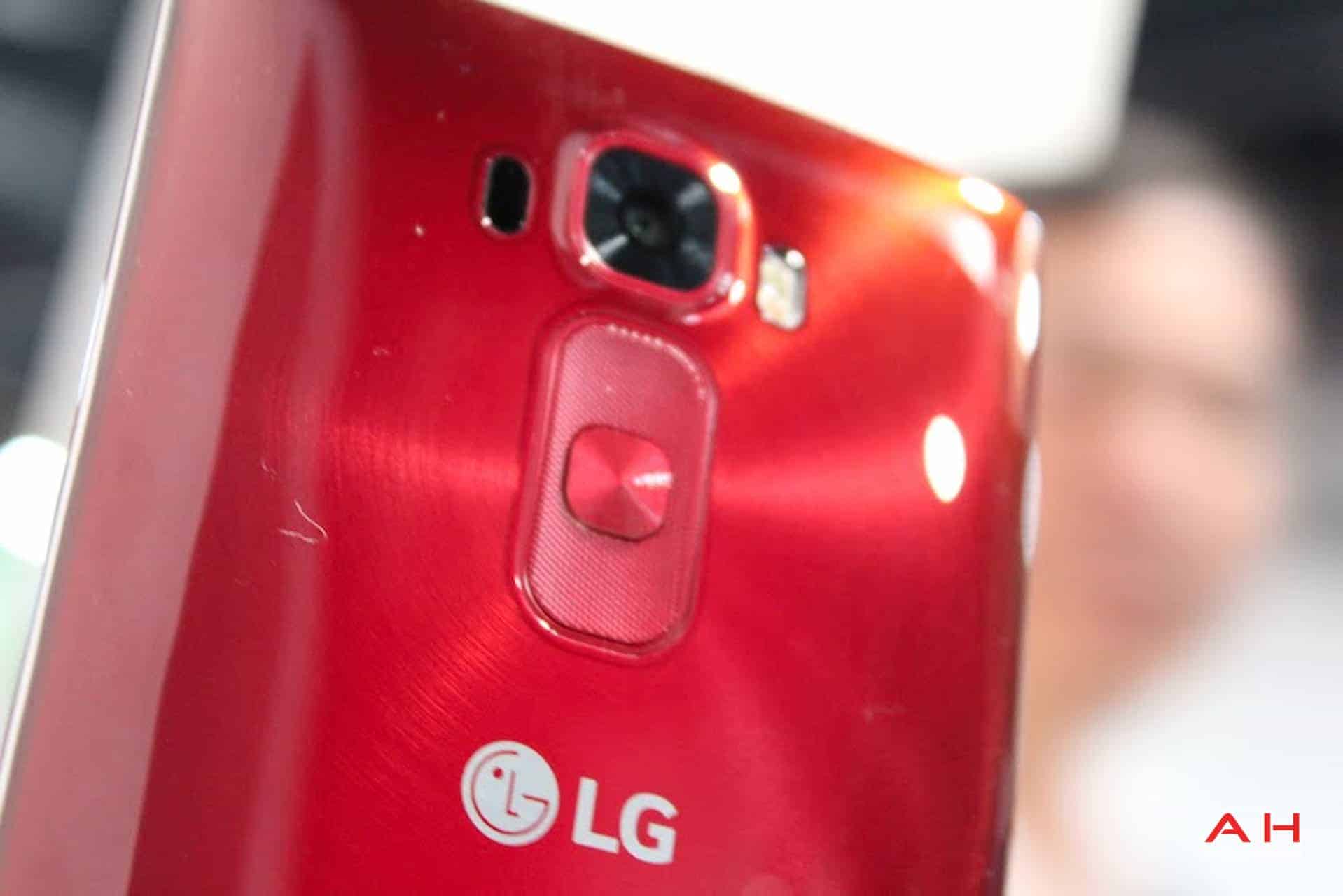 Like I said in the Introduction, the LG G Flex 2 has to be the winner of this comparison – it is a better size, better display, better processing power, more RAM, expansion for internal memory and added the Laser Autofocus, a dual LED flash and OIS+ to the camera.  It now has Quick Charge 2.0 and the newest Android 5.0 Lollipop straight out-of-the-box…and to top it all off, it will most likely cost the same!

We are not sure why T-Mobile has decided to forego this beautiful device, but they made add it to there available devices when it is finally released…end of January in Korea and then it will go worldwide in February.  Sprint will have the exclusive Volcano Red edition, again, not sure why LG would limit the hot color to only Sprint's network.

Please hit us up on our Google+ Page and let us know if you will be waiting to pick up the new LG G Flex 2 when it comes out, or will you be waiting for another new device…as always, we would love to hear from you.