OnePlus attracted a lot of attention to themselves when they launched the Cyanogen-powered smartphone last year, the OnePlus One. This device was not only powered by one of the most popular Android ROMs in the world, but was also loaded with great specs on the inside and priced extremely low. There was a catch though, you couldn’t buy one without an invitation, which made a lot of people angry. OnePlus and Cyanogen will quite probably part ways soon, the relationship between these two companies isn’t exactly the best and Cyanogen already agreed on a partnership with Micromax, the Yureka smartphone is already out on the market in fact. That being said, OnePlus is reportedly already working on a new ROM for the One’s successor, it will be interesting to see what will this company release next and if it will be able to enjoy the same attention this time around.

This company will announce something tomorrow, at least according to their newest teaser on Weibo (Chinese social network). The basically posted a periodic table on the aforementioned social network with a tagline “Never Settle”. The company has asked its fans to check back tomorrow at 10am (local time) and see what’s going on. Now, we can only guess what will OnePlus announce, but I guess a new back cover is definitely a possibility. The company has already released a couple of options in that department (wood back covers), but they might announce a new one. Who knows, perhaps we’ll get a metallic back cover or something? This is just a wild guess, of course, who knows what will the company announce tomorrow.

What do you think they’ll announce? Back cover is definitely the first thing that crossed my mind, but as I said, that’s just a wild guess, perhaps your guess will be more accurate. Let us know what you think in the comments, we’d love to hear from you, as always. Either way, we’ll be there tomorrow to find out what is this mysterious announcement about, as we always are. Until then, stay tuned. 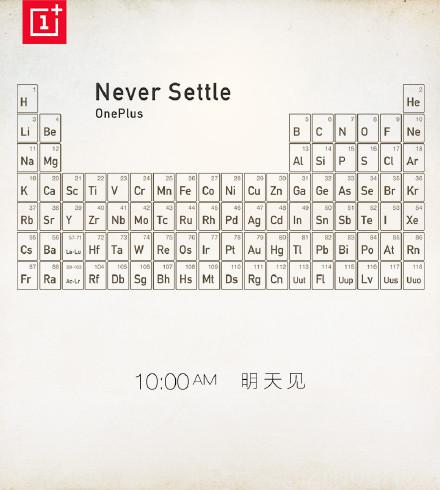