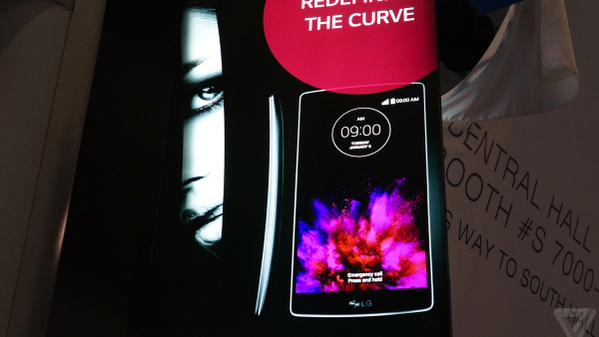 We've been hearing rumors for a good few weeks that LG would be announcing the LG G Flex 2 at CES this week. And quite a few people are already at CES in Las Vegas, and The Verge has gotten their eyes on a LG banner that pretty much confirms the LG G Flex 2 which states "Redefining the Curve". Last year, LG announced the LG G Flex for the US here at CES, and it looks like this is where the successor will be announced. The LG G Flex 2 is expected to run on a Snapdragon 805 or 810 (depending on whether Qualcomm has the Snapdragon 810 ready yet) as well as 3GB of RAM and at least a 1080p display. I'm saying a 1080p display because last year the LG G Flex had a 720p display, so I don't think it'll jump straight to QHD.

The name is also basically official as well. If you take a look at the full picture over on The Verge's post (linked in the sources section below), you'll see that it says the LG G Flex 2.

As far as the design of the LG G Flex 2 goes, we're expecting it to be pretty much the same as the LG G3, so we'll probably see a faux metal design (which is really plastic), and super thin bezels. Not to mention it flexes, which is pretty sweet. I'm especially excited to see how well the self-healing coating on the back has improved over last year. It healed scratches and such on the LG G Flex, but it wasn't perfect, and this is something that I think could be a big selling point for LG here.