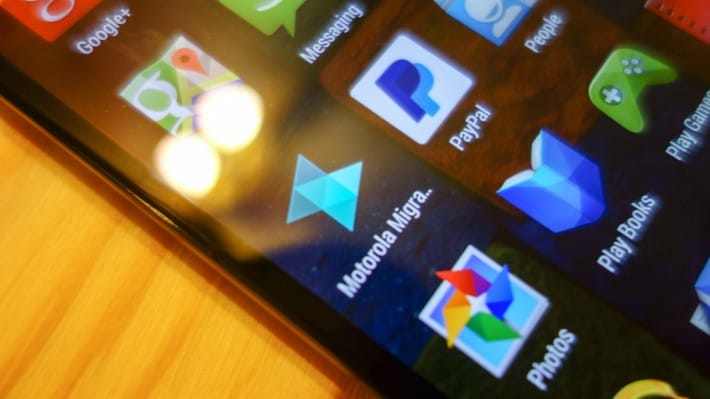 Slowly but surely, app developers seem to be updating their applications to the latest Android design guidelines that Google has put forth since before the official release of Android 5.0 Lollipop. Google has already done this with a handful of their applications if not most of them, and plenty of other developers big and small have been following suit, giving their apps a facelift to evoke the Material Design like style we see Android 5.0. Motorola is one of the latest to do this with their Motorola Migrate app, which you may be familiar with if you have recently switched from any other OEM device to a Motorola smartphone.

Motorola Migrate for those who are unaware, helps you move the information from your old phone to your new Motorola smartphone, whether your old phone is an older Android device from 2.2+, an old iOS device that needs things transferred from iCloud, or just a plain old, regular cell phone. It's a useful application and one that any person who is considering picking up a Moto device for the next phone should acquaint themselves with as it makes the transfer process much easier. It moves things like your contacts, music, photos, videos, messages, and call logs over to the new device by using the camera on the old phone to scan the QR code generated in the app on your new Motorola device. Easy right?

Moving on to the Material Design styling that has apparently been updated into the app, the what's new section of the app states "Android 5.0 Lollipop material design changes," however the images don't look like material design all that much as you can see from the pictures below, which were pulled straight from the Play Store. Perhaps the Material Design changes show up on a device actually running Lollipop? As I don't personally have a device on Android 5.0 yet I can't check for myself, but if any readers out there can confirm this feel free to share it in the comments. It's also possible that Motorola is calling this Material Design due to the use of color changes within the app, although it feels less Material Design to us when you compare it to apps like Gmail.