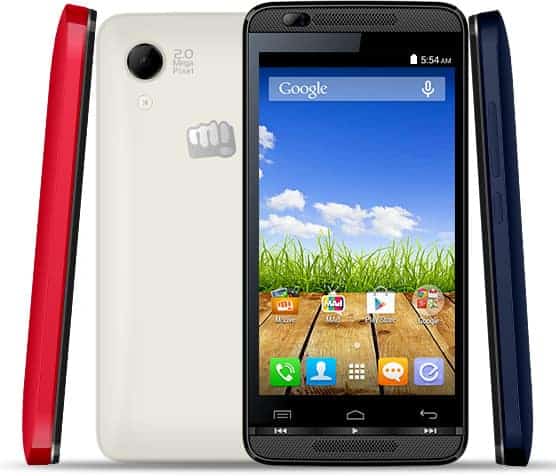 Micromax is a rather interesting company, especially as of late. This Indian smartphone manufacturer was one of Google's initial Android One partners when the company release their Canvas A1 handset in India. This company has also signed an agreement with Cyanogen in recently which gives them exclusive rights to Cyanogen's Android-based OS in India. Soon after that, Micromax-owned company Yu launched their first handset called Yureka which runs Cyanogen OS on top of Android.

This company usually release low and mid-range handsets in India though, like the one they just unveiled. Micromax has announced the Bolt AD3520 handset which is their oddly-named low-end smartphone offering. This handset features a 4.5-inch 850 x 480 IPS display, 512MB and 4GB of internal storage (expandable via microSD card up to 32GB). The device is powered by MediaTek's MT6571 dual-core SoC clocked at 1.3GHz. Android 4.4 KitKat comes pre-installed on this device with Micromax's skin on top of it and a 1,500mAh battery is a part of the package as well. 2-megapixel camera is located at the back of this handset and is flanked by an LED flash, while there's a 0.3-megapixel snapper available up front. This is a dual-SIM, 2G device which also sport dual front-firing speakers, which surprised me of course. Wi-Fi b/g/n, Bluetooth 4.0 and GPS are also a part of this package.

So, Micromax decided to release a 2G device with dual front-facing speakers? That's odd, at least in my book. Anyhow, several apps come pre-installed on this thing: True Caller, Zapr, Reverie, Reverie Phonebook, Hike, Opera, Clean Master and Dr. Safety. Egg Master, Fruit Blast Puzzle, Panda Run and a few more games are available on the device as well. I don't know why would anyone want to purchase a device like this, not having a 3G connectivity is just not acceptable nowadays, but I guess if you're buying this thing for someone who won't use the internet connection (like your parents or grandparents perhaps), this might be a good choice. The device comes in Electric Grey, Raging Red and Pristine White color options and is priced at Rs. 3,490 ($55) on eBay.