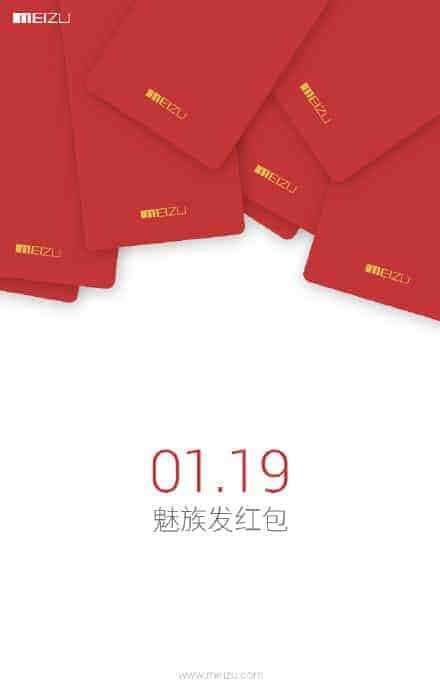 Following the release of company's Meizu M1 Note handset, Company's founder hinted that the company will launch the smaller version of the device. The 5-inch version of this handset has been rumored even before the M1 Note launched, so this was to be expected. Besides, Meizu said that they'll announced four handsets in 2014, and they delivered only three, which also re-affirms the fact we'll see the M1 Mini (or whatever they decide to call it) launched this month. Some of you might be wondering what am I talking about, it's 2015 already, well, not in China. Chinese new year is at the end of January, so they still have time to release this thing.

January 27 was already hinted as the possible release date of this thing, but Meizu just released an official teaser which brings another date to the table. If you take a look at the image below, you'll see a bunch of red cards, or something like that. The most interesting thing here is the "January 19" part. This doesn't have to mean Meizu will hold an event on that date though, this might be Meizu's way to announce some sort of promotion, or an announcement. This Chinese smartphone manufacturer did this a couple of times before, they tend to announce a date on which they announce a date for the event, sounds completely unnecessary, but they did it in the past, so this doesn't have to mean they'll actually hold an event on January 19. That being said, we'll probably get some extra info in the following days and will be able to pin the launch of the Meizu M1 Mini accurately.

We also have some unofficial news, a leak if you will, to share with you. According to this leak, Meizu's M1 Mini handset will cost only 599 Yuan ($97). This is actually hard to believe, especially if the specs will be the same as in the M1 Note which costs 999 Yuan ($161). I do hope this is true though, we'll find out soon. What do you think, is it possible this device will cost only 599 Yuan once it launches?