Meizu leaks and rumors were rather quiet for a while, but not anymore. Meizu’s January 28 event is getting closer and closer by the day, and we’re getting more and more information about Meizu’s upcoming products, well, alleged products. We’ve reported earlier today that Meizu might offer the upcoming M1 Mini handset in three different OS variants, running Flyme, YunOS and Ubuntu (Touch) OS. This leak actually sounds really interesting, as I already mentioned, and I’d love to see an Ubuntu-powered Meizu handset, which will happen sooner or later because Canonical and Meizu signed a partnership agreement a while back.

Anyhow, we have a new leak to share with you now. If you take a look at the image above, you’ll notice three handsets, from left to right: Meizu MX4, Meizu M1 Note and (the alleged) M1 Mini handsets. The third device is reportedly the upcoming M1 Mini device, but it looks like a prototype at this point. This handset will quite probably look the same as the M1 Note but will sport a smaller display, and the device in the image doesn’t look anything like. The most interesting thing here though, is the fact that this device is running YunOS, which gives at least some credibility to the earlier leak.

M1 Mini is expected to feature a 4.7 or a 5-inch display, 720p or 1080p in resolution. It was initially said that it will sport a 5-inch 1080p display, but latest rumors claim that it will be a 4.7-inch 720p display, so it all depends on who you want to believe. Anyhow, this device will offer 2GB of RAM and 16GB of internal storage. 13-megapixel camera will probably be located at the back of this device, and a 5-megapixel camera will be available up front. The device will allegedly be available in three OS variants, as I already mentioned in the previous paragraph.

This thing will launch on January 28, but it seems like Meizu is planning to launch some “Connected Home” smart devices as well. Anyhow, the event is less than a week away and I’m sure we’ll see more leaks before that day comes, so stay tuned. 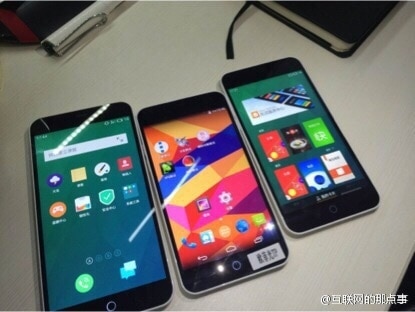