Skip to content
Trusted By Millions
Independent, Expert Android News You Can Trust, Since 2010
Publishing More Android Than Anyone Else
11
Today
109
This Week
757
This Month
757
This Year
118597
All Time There is much to admire about MediaTek. They’ve grown from a provider of low cost reference designs for feature ‘phones to providing chipsets for an increasing number of devices, with and without a baseband (modem) and encompassing smartphones and tablets. However, until recently, MediaTek’s efforts have largely been dismissed as copycat or barking up the wrong tree and their products were at least half a generation behind “the establishment,” this being the Qualcomm Snapdragon, Apple A-series, Nvidia Tegra and Samsung Exynos of this world. MediaTek were the first to bring an octa core processor to the consumer smartphone market and now the establishment have followed.

MediaTek have worked on their wireless technology integration with processors. Tight integration between the various components is important for mobile devices because it simplifies the design and makes the most of limited interior space, heat and power consumption budgets. Another important concern is the die size of the architecture, where smaller is “better.” By better, this means several things. Firstly, as the physical component size shrinks, it leaves more space for other hardware inside the chassis. Smaller chipsets require a lower voltage as there is less power and heat loss between components. Also, because smaller components have a shorter distance for electrons to travel between, these components can be faster. The Dell Streak sitting next to me as I write this has a Qualcomm processor built on a 65nm die process. The Nexus 7 I am writing this on has a processor based on a 28nm die process and now MediaTek are following the establishment by working on releasing a processor built on a 20nm manufacturing process, according to a leaked roadmap, shown at the bottom of the page.

There’s more. Not only will the new MediaTek MTK67XX processor be built on a 20nm die but it’ll also deliver 4G LTE Category 6 wireless performance and feature a 64-bit, octa core design. If this seems similar, it should because the Qualcomm Snapdragon 810 offers eight cores, 64-bit processing and 20nm die size. MediaTek’s current MTK6795 processor offers 64-bit processing, eight cores, LTE Category 4 and a 28nm die size. And yes, the MediaTek is a few months behind the Snapdragon 810 and offers a slower LTE category (Qualcomm have bumped the Snapdragon 810 up to LTE Category 9), but with many markets simply not supporting the higher LTE categories, does the modem matter so much at this stage? And it’s likely that MediaTek’s pricing will be more aggressive than Qualcomm.

Ultimately, that MediaTek is still a few quarters behind Qualcomm is neither here nor there; that they are relatively close is a good thing. Both Qualcomm and Nvidia have (temporarily) abandoned their custom processor core designs and instead opted for ARM’s reference processor core, presumably in order to get their SoCs to the market as quickly as possible. They’re feeling the pressure from MediaTek and similar competitors and worse, their processor cores are now the same. 2015 will be a watershed year for the mobile processor industry and for 2016, the Qualcomms and Nvidias of this world are going to have to pull a rabbit out of the hole if they’re to differentiate against the industry. 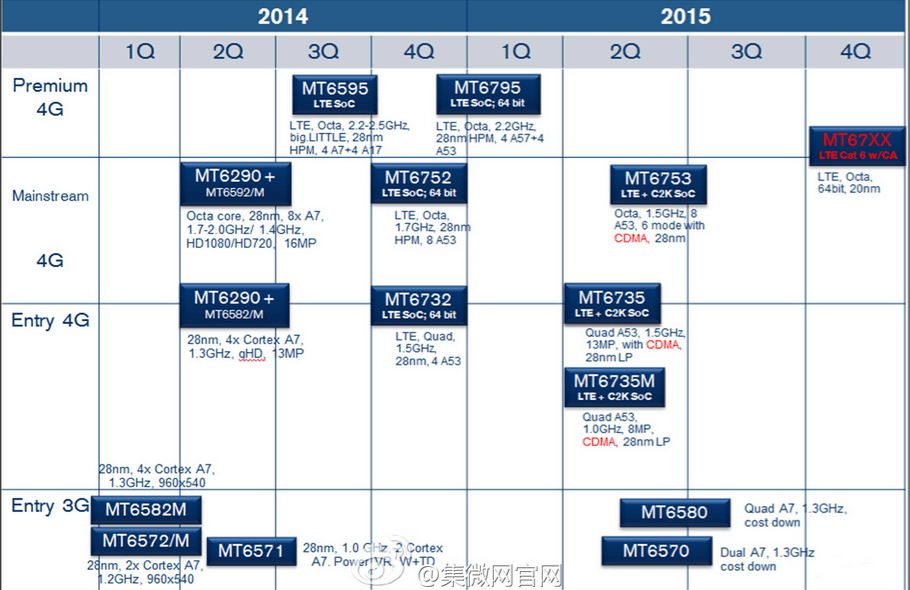