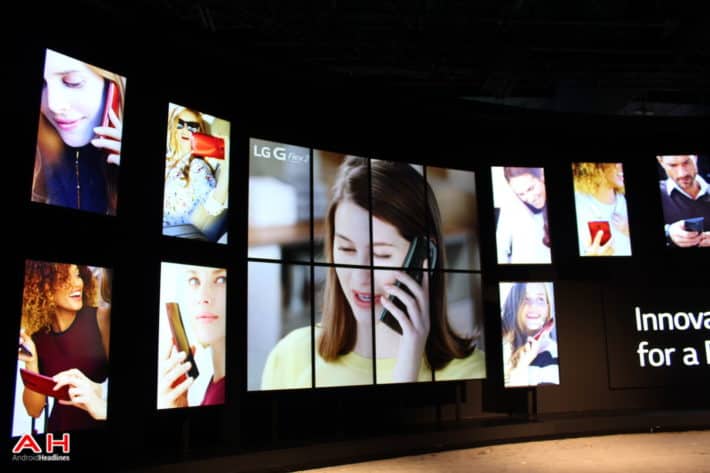 While LG's event at CES isn't scheduled to start until 8AM PST on Monday, we have eyes on the ground and it sure looks like the G Flex 2 is going to feature in their announcements later on. With a fairly large display (as seen above) dedicated to the device on the show floor, it looks like LG wants to make some noise about their second-generation G Flex smartphone. While we don't know the full story just yet, we can certainly pick out a few details from what we've seen on the show floor.

First of all, it sure looks like the G Flex 2 is set to be another large device. Last year's model featured a 6-inch 720p display and judging by the size of the handset in the above images, the G Flex 2 looks set to be just as big. Whether or not this year's G Flex will be even larger however is something we'll have to wait and see about. We've been hearing a lot about this new flexible device from LG and there's just a few hours left before we get to see just what LG has been working on for this past year or more.

Rumor has it this is to be one of the first devices announced with the 64-bit Snapdragon 810 CPU and if that turns out to be the case it's safe to say that the G Flex 2 won't be launching for a few months just yet. Stay tuned for more information on the G Flex 2 as we have it.