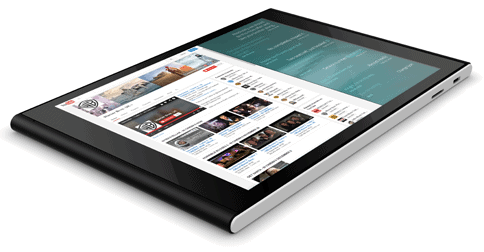 There are quite a few of mobile OS' available out in the market at the moment. Android, iOS and Windows Phone are definitely the best-known ones, but BlackBerry's BB OS and Jolla's Sailfish OS are also good examples of solid mobile OS'. As the title suggests, we're here to talk about the latter, not the OS per se, but a device running that OS. You've probably already heard of Jolla's smartphone, and even perhaps their first tablet offering running Sailfish OS, a different approach to using your smart device, that's for sure. Well, this Finnish smartphone manufacturer intends to manufacture a follow-up to their tablet.

Jolla has opened up a campaign on Indiegogo and is trying to raise funds in order to release their 2nd-gen Jolla Tablet. In case you're interested, read on. This thing will once again sport a 7.9-inch display, though this time around it will have 64GB of storage, compared to the 32GB that the first-gen tablet featured. A slightly more powerful battery will be included in here as well, a 4,450mAh unit (previous iteration had a 4,300mAh battery), and the tablet will also support microSD card expansion up to 128GB. There is one problem with the microSD card support though: "Due to Microsoft's licensing limitation, cards over 32GB that are formatted in Jolla Tablet will not be readable by Windows computers or devices that advertise microSDXC support (cameras/phones/tablets)", which is quite unfortunate.

If you intend to support this project, just follow the source link down below. Crowdsourcing backers can get the 64GB of this thing for $250, which is only $30 more than what you'd pay for the 32GB version. Once the tablet hits the market it will cost around $300 according to Jolla, so backing the company via Indiegogo might be the best way to get your hands on that tablet, if you're interested of course. Oh, and by the way, Jolla does offer some bundling options for the tablet and a phone, in case you'd like to know more, just follow the source link down below, you'll find all the necessary information there.