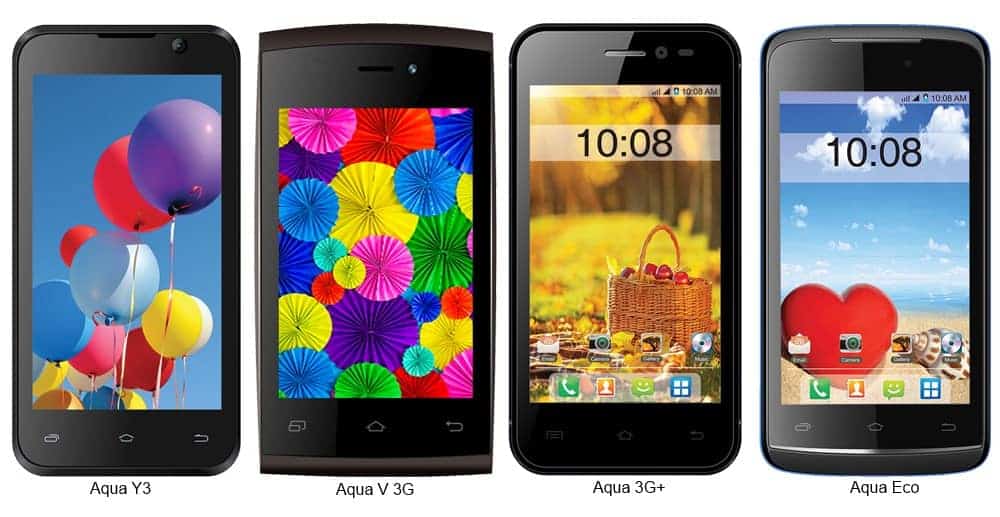 Intex Mobile is a rather well-known smartphone manufacturer in India. This company releases mainly low and mid-range handsets in that Asian country and is trying to compete with Micromax in that department. Intex Mobile has just quietly released four new budget smartphones for Indian market, Aqua Y3, Aqua V 3G, Aqua 3G+ and Aqua Eco. The first three are already available for purchase via certain e-retailers, while the latter one will be available within a couple of days. Anyhow, let's see what these handsets have to offer.

Intex Aqua V 3G and Aqua 3G+ handsets feature a single-core processor clocked at 1GHz and 256MB of RAM. The Aqua V 3G has 484MB of available internal storage, while the Aqua 3G+ has 534MB of available in-built storage. Both of these handsets offer a microSD slot in case you want to expand upon that. Aqua V 3G comes with a 3.5-inch HVGA display and a 2-megapixel rear-facing camera (+LED flash), while the Aqua 3G+ sports a 4-inch WVGA panel and a 3.2-megapixel shooter (+LED flash) on the back. Both of these handsets ship with Android 4.4.2 KitKat, have a VGA front-facing camera, offer 3G, Wi-Fi and Bluetooth connectivity and also come with dual-SIM capability.

Intex Aqua Y3 also comes with Android 4.4 KitKat pre-installed and it features a 4.5-inch FWVGA display, 512MB of RAM and 1.27 of user-accessible internal storage (expandable via microSD card). This thing is powered by a 1GHz dual-core processor and it offers 5-megapixel camera on the back (+LED flash). 1,600mAh battery is also a part of the package, as well as a VGA front-facing snapper. 3G, Wi-Fi and Bluetooth are available here as well, plus this is also a dual-SIM handset.

The last one out of the bunch is the Intex Aqua Eco handset. This handset sports a 4-inch WVGA IPS display along with 512MB of RAM and 80MB of usable internal storage (expandable via microSD card). 1.2GHz quad-core chip is powering on this handset and 1,500mAh battery ships with the device. 3.2-megapixel snapper is located on the back of this thing and is flanked by an LED flash, while there's a 1.3-megapixel snapper available up front. Android 4.2.2 comes pre-installed on this device and you won't get a 3G connectivity here, this is a 2G handset. Bluetooth, GPS, Wi-FI and dual-SIM are available though.