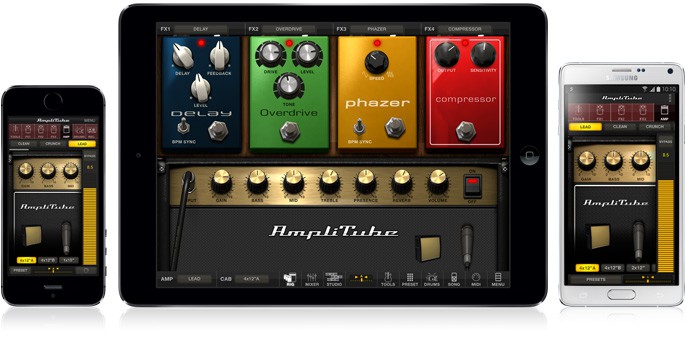 IK Multimedia is finally bringing its fantastic guitar interface to Android the iRig 2 that they announced yesterday. They announced the iRig HD-A back in November of last year, but that only brought their guitar software and hardware to a couple of Samsung devices. Now with the iRig 2 they are adding full compatibility to most Android smartphones and tablets. This is a pretty big step forward for musicians who prefer Android to other platforms.

The iRig 2 brings with it full Android compatibility and the ability to use IK Multimedia's AmpliTube app. The iRig 2 actually comes with "a powerful cross-platform suite of apps and software that includes free versions of AmpliTube for iOS, Android and Mac/PC." The interface works with both guitar and bass and has a 1/4" amplifier output so you can use the iRig 2 with your existing setup without the need for an adaptor. You could basically use the iRig 2 and its accompanying software to replace your pedalboard if you wanted to. IK Multimedia isn't specific on which Android devices can be used with the iRig 2. All they say is that the unit is "compatible with many popular Android devices produced by manufacturers like Samsung, LG, Motorola, HTC and more." This with likely require a device running Lollipop due to its support for low latency audio.

IK Multimedia has been making outstanding guitar and bass interfaces for iOS for a while. Now that Android supports low latency audio, with 5.0 Lollipop, they decided to bring their products over to us as well. Last November they announced the iRig HD-A which would work with the Samsung Note 4 and Note 4 Edge. The iRig 2 will be available in Q1 of 2015 so we'll be able to use it with most of our Android devices very soon. The iRig 2 will cost $40 once it's available, so it will only set you back a few dollars to check it out. I'll be keeping a watchful eye out so I can grab one when they are released.