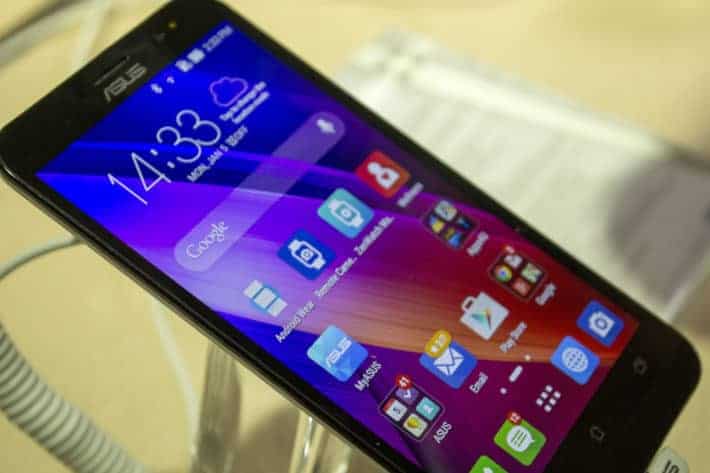 Earlier today, ASUS had a new ZenFone to show off during CES 2015, and while the ZenFone 2 still retains the value-for-money of the original line there's a lot more to love here. For one thing, the ZenFone 2 starts at just $199, unlocked, no carriers, no contracts – just a decent smartphone. Powered by Intel's Z3580, this is running Android 5.0 Lollipop as well as ASUS' ZenUI and our man on the ground, Mr Sutrich, was able to get us some hands on snaps and impressions from the show floor.

Right away, there are similarities between this and the ZenFone 5 that I reviewed last summer, with ASUS sticking close to the original ZenFone design. The concentric circles are here once again, as too are the capacitive buttons that flank the front of the device. Around the back, and ASUS have changed a few things here. They've taken a leaf out of LG's playbook here and the volume buttons are now found on the rear of the device, just like the newly announced G Flex 2 from earlier today. This is a fairly decent device in the hand, it's not exactly thin, nor chunky and while it is a larger device at 5.5-inches, the 72% screen to device percentage means that there isn't too much space wasted. At least for a device that sports capacitive buttons at least.

Overall, it seems like ASUS has done it again; delivered a device that ticks the majority of boxes without breaking the bank or living users feeling shortchanged. Of course, we'll have to spend some quality time with a ZenFone 2 – or the ZenFone 2 Zoom for that matter – to see how good the camera really is. We're looking forward to more prolonged exposure to the ZenFone 2 however, and hopefully we'll be able to do that when the device launches this March starting at $199 for the 2GB of RAM version.