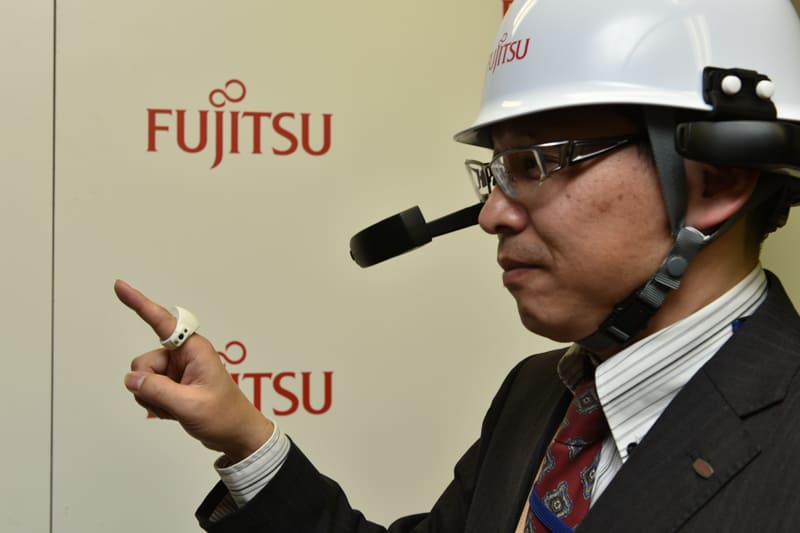 A lot of companies launched wearable gadgets in 2014, we've seen a lot of smartbands, smartwatches… and other "smart" gadgets. Smartwatches were easily the most popular devices in 2014 and have stole the show, that trend will quite probably continue this year as well. There are a ton of unique gadgets out there, which are not nearly as popular as smartwatches are. Ever wanted to wear a multi-functional ring on your finger? Well, Fujitsu just announced a smart ring that might interest you.

This smart ring was developed by Fujitsu Laboratories and it basically lets you use your finger in order to draw or write in the air. In order for this thing to work, you'll need to connect it to your smartphone via Bluetooth, and unfortunately a special Fujitsu helmet. Sound odd? Well, it is, at least for now. This smart right is compatible with Bluetooth Low Energy (LE) standard, brings NFC functionality and weighs only 10 grams. The battery, that comes with this device, is rechargeable and it lasts up to 8 hours on a charge.

Why the helmet you wonder? Well, this ring actually needs it in order to track your finger movements in the air and recognize the letters. You need to press the button on the ring in order to trigger tracking, and the helmet starts recognizing what you're writing / drawing. When it comes to numbers, this thing reportedly has a 95% recognition rate, which is commendable. Anyhow, this ring also allows you to browse through your phone's menu, you can also draw something on an image of your choice.

Fujitsu has unveiled this product, but it is still unknown if it will be available for the public. This is more of a reference product at the moment, and until they figure out how to ditch that huge helmet and perhaps even reduce the size of the ring, I don't think there's any point in launching this. Very few tech enthusiasts would actually grab one of these considering there's really not much functionality you can get out of it, the product is just not there yet in my humble opinion. That being said, this has potential, it really does. What are your thoughts here?