OnePlus and their flagship device the OnePlus One is known for being a rooter's dream. If you are someone who likes to open up a device's bootloader, download a custom recovery and install various ROMs. Then the OnePlus One is meant to be for you. Not only does the device already come with a custom ROM pre-installed, in the form of Cyanogen's CM11s, but OnePlus actively encourage users to root their devices and install ROMs. In fact, quite routinely, OnePlus suggest in their forums ROMs that users should try. OnePlus are one of the only companies who specifically state that rooting your device will not void your warranty. So you are free to root your device knowing if you have an issue, you are covered.

Well, that broadening view of being 'covered' seems to be a debatable one. A user in the OnePlus forum is currently experiencing this problem as we speak. According to the user, they had tried to flash the latest version of CM12 (Cyanogen's take on Android 5.0 Lollipop) and ran into a problem with the device bootlooping (device becomes stuck on logo when booting). As we have reported CM12 is currently only available in a nightly (experimental) form and so the latest nightly was what the user installed. The user also notes that TWRP was used to flash CM12 and therefore everything should have been quite straight forward.

Once the issue occurred, the user contacted OnePlus and it seems OnePlus did try to remotely help with the semi-bricked device. However, the user then notes that OnePlus emailed them explaining that they had damaged the motherboard and are going to be charged $335 for the unit to be fixed (image below). As we already know, this is pretty much the cost of the device to begin with. Since then, members in the forum have been trying to help the user restore their system, which seems to be suffering from a damaged partition (somehow caused by flashing the nightly). To add to the users frustration, it seems a moderator in the forum has also chimed in reinforcing that it is not OnePlus's fault and therefore they do not have to take responsibility for the damage done as the user was trying to install a nightly and not an stable version of CM "Note that despite the fact that you're using an official CM12 rom, said CM12 rom is not an official OPPO rom certified by Google. It is an experimental rom made available to users who wish to tinker with it, and by doing so you accept the risks".

The use of the word 'experimental' seems to suggest, that if you are a OnePlus One owner and install nightly versions of CM12 then you are not actually covered by the OnePlus warranty. Which is even more alarming as a number of OnePlus owners will be planning (if they are not already) on using CM12 in its nightly state. Therefore, if you do own a OnePlus One and are planning to run the latest version of CM12, then you might want to be aware that OnePlus are unlikely to provide warranty on nightly ROMs. You can read the full thread by clicking the source link below, although you might have to sign up to OnePlus forums to gain access. 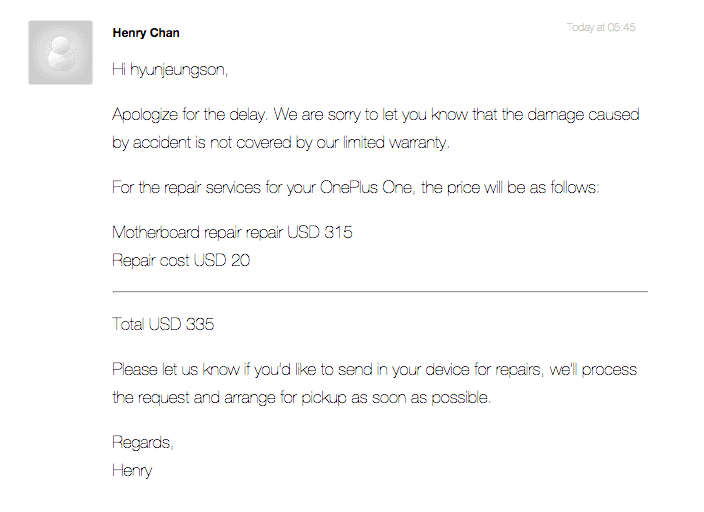