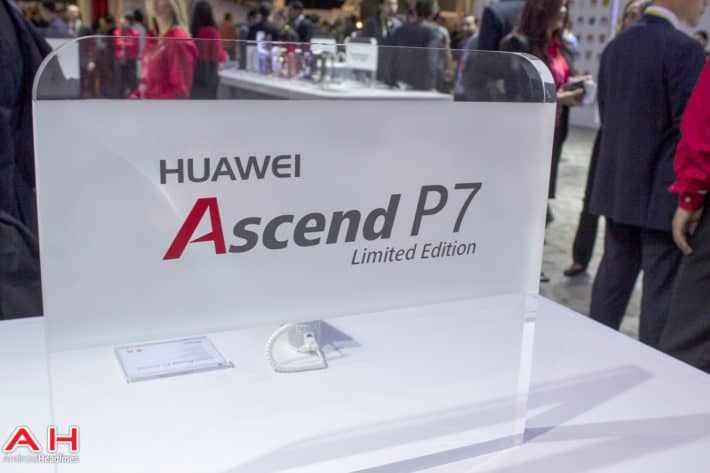 The avid android news readers out there will be well aware of Huawei and their continued rise to stardom. The Chinese company has managed in a very short amount of time to rise to one of the biggest smartphone manufacturers around. With such status, Huawei are releasing an increasing selection of smartphones. One of their more popular range of devices is the Huawei Premium 'P' series which include the likes of the Ascend P6 and the more recently released, Ascend P7. The Huawei Ascend P7 was another one of the Huawei devices which made an appearance at CES and as such we were there to grab a few hands on images for you to check out.

The Huawei Ascend P7 comes with a 5" display with a 1920 x 1080 display. Inside, the P7 comes loaded with 2GB RAM and powered by Huawei's own HiSilicon Kirin 910T quad-core processor (clocking at 1.8GHz). In terms of storage the P7 comes as standard with 16GB internal storage along with the option of expanding the memory with a microSD card slot. In terms of cameras, the P7 comes equipped with a 13MP rear shooter and also an 8MP front facing option. Additional features worth noting include a 2,500mAh battery, 4G and running on Android 4.4 (KitKat) with Huawei's Emotion UI 2.3 skin on top. For those that want an extra degree of protection, Huawei also released a Sapphire display edition of the P7. If you like the device then you can check out the images of the P7 below.