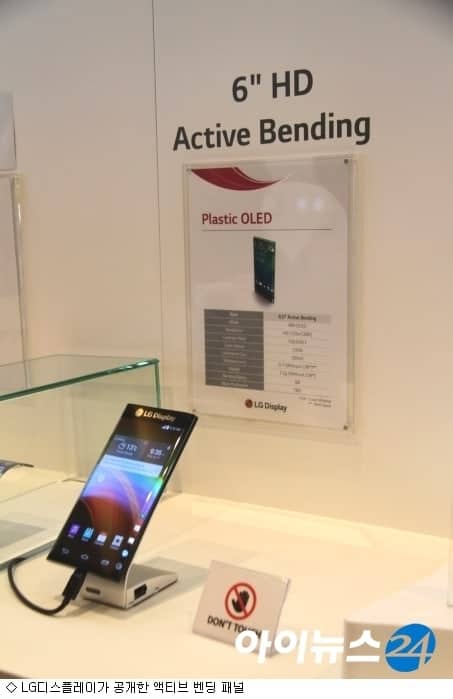 Now that the show floor has opened to the masses at CES 2015, we've been able to get our hands on all sorts of devices from the interesting Kodak IM5 to the very attractive G Flex 2. However, what we don't seem to have access to is secret demonstrations from companies like LG, Samsung and Sony. It might sound like some sort of conspiracy theory, but there's a need to show off technology early to your partners like carriers to see if it's something that would do well when it hits the market. As a press release from LG Display clearly states, the company has been hosting "select customers" in a "private showroom" at the Bellagio Hotel.

In this private showroom, it seems like LG has been showing certain customers a dual edged display, with the display seemingly falling off both sides of the display, left and right. LG has dubbed this "Active Bending", and the model they had on display in Bellagio was a 6-inch size panel and while there's obviously no concrete word on which manufacturers will be adopting the new technology there are whispers that Xiaomi could be one of the first in line. Besides, the potential for LG to release their own device with such technology onboard is pretty high and it's possible that the company would release a version of the G4 with dual edge panels either side, but with the G Flex 2 looking like such an accomplished product I don't really see the need for them to do so.

It's good to see this sort of technology being showcased as it's a good sign that we could be close to getting this sort of technology becoming the mainstream. Right now it seems like the question is not can LG and Samsung produce devices with flexible displays, but whether or not consumers want them. The Galaxy Note Edge has proven to be popular, but I wonder how many of them Samsung has really sold since launch. Could an 'edge' at each side of a device help LG and Samsung sell more units? 2015 looks like the year we find out.