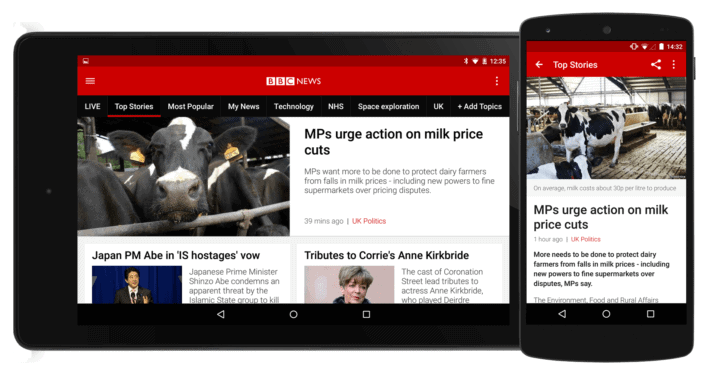 The BBC News app, from the British broadcaster, has long been a favorite of UK users and those all over the world has seen its first major redesign since 2010. While the app has been tweaked since then, it's largely looked the same for a long time, with this latest update though the BBC is bringing a fresh look and feel to the app, along with some new features to make the overall experience much more personal. The BBC News app is arguably one of the more important news apps on Android, as it delivers a decent experience on both tablets and phones while offering quick updates and live coverage of certain events, too.

With the latest update – which is slated to roll out over the next few days – the BBC have given the app a whole new look that uses panes rather than the rows that were used heavily in the previous app's design. It also looks like the font choices have been tweaked for Android devices as well, and it sure looks like the app was made with Lollipop devices in mind going forward. It's not just the look and feel of the app that's changed however, as the Beeb have made changes to how users read news using the app.

With the new 'My News' section, users can pull together certain topics they're interested in to create a front page full of information they're interested in. This sort of thing is hardly new, but it was missing from previous versions of the app, and as a BBC News user myself I can say that I'll be happy not to hop from topic to topic all the time. The new app can now hook into your GPS location to deliver news relevant to where you are, which I assume is going to be of more use to those in the UK than anywhere else. Sadly, at the time of writing, I was unable to update the app on either my phone or tablet, but the BBC has said this update is to roll out over the next few days, so I guess we're going to need to be patient for a little while longer. If you've yet to give the app a try, you can download it from the Play Store here.