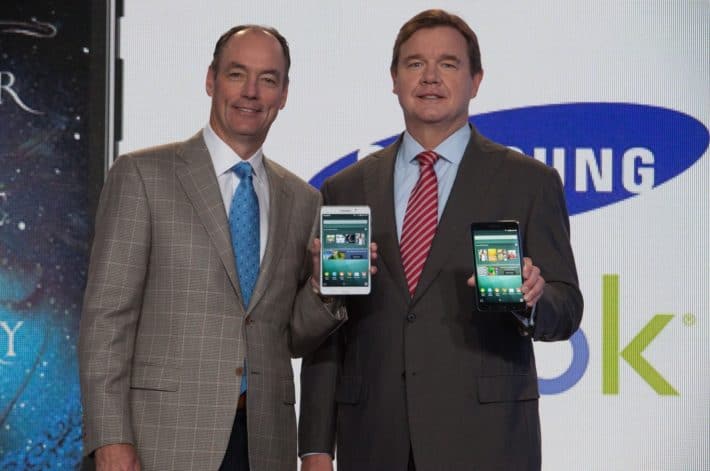 When it comes to a good story, the path of the Barnes & Noble e-reader, the Nook, has not been a happy one…though somewhat interesting.  The holiday season was not exactly a merry one as sales plummeted 55.4-percent compared to 2013's holiday shopping period.  Hardware, accessories and digital content were all down for the season – device and accessories sales were down by 67.9-percent and digital content were down 25-percent.

It has been a real struggle for Barnes & Noble when it comes to Amazon's Kindle e-readers, not to mention the Apple, Samsung and Google's Nexus tablets on which anybody can read a book by downloading an app.  In December, Barnes & Noble announced it was buying out Microsoft's stake in their Nook division for $120 million – this was as a result of Microsoft's $300 million investment back in 2012.  In June, Barnes & Noble announced they would split into two companies, to be completed by August 2015 – one would handle retail stores and online sales, while the other would cover the Nook digital operations, and the chain's college bookstores.

The original Nook, much like Amazon's Kindle, was an Android-based tablet that was heavily skinned to include certain apps.  In August, Barnes & Noble announced that they would discontinue their own skinned Nook tablets and instead team up with Samsung to sell a Nook-branded Galaxy Tab 4 tablet.  This made it possible for users to use the Kindle app as well as other apps, and the ability to uses books from the Google Play store.

Why Barnes & Noble's sales were down could be due to a number of things – did the Galaxy Tab 4 Nook make it too easy for purchasers to read books via other readers on the same tablet.  Were the sales of Android tablets down overall this holiday season?  Without exact sales figures for their entire line, it might be that the Galaxy Tab 4 Nook sold the expected amount, but their other e-ink reader, the Nook Glowlight – with no update during 2014 – could not hold off the upgraded and lower priced line of Amazon's Kindles.

Some would like to blame the downward sales slump on the Samsung branded Nook, as their Galaxy Tab series did not sell very well themselves in 2014.  It could also be that a specialized e-reader is no longer needed as more people choose to read their e-books on regular tablets that can perform a myriad of other functions with full access to Google Play Store and Google's ecosystem of Maps, Gmail and others. Please hook up with us on our Google+ Page and let us know if you purchased a Galaxy Tab 4 Nook or if you prefer Amazon's Kindle or simply your tablet or phablet for reading…as always, we would love to hear from you.