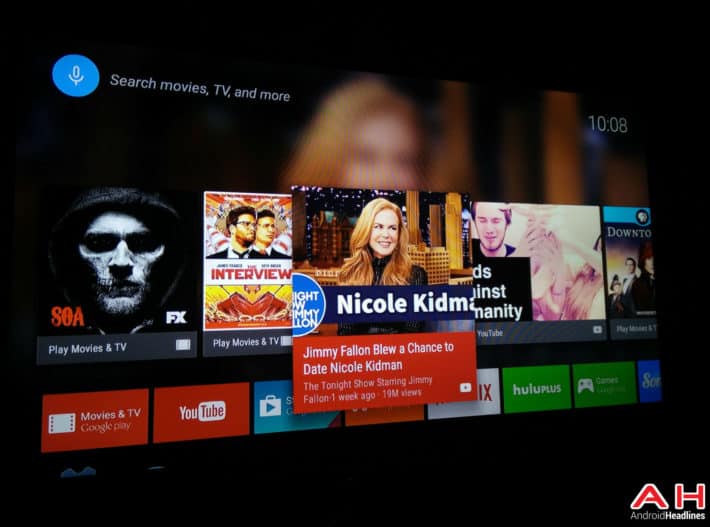 Android TV was first unveiled to the public back at Google's I/O event in the early part of the second half of last year. In spite of time passing, many users still have not got to see Android TV land in their hands…or for that matter, on their screens. Back in November the first of the Android units was released to market, in the form of Google's Nexus Player. That said, everything changed and the general view of Android TV really came to fruition last week at CES. This was the first time we really started to see the market develop into what it will become in the future. Android TV is finally arriving in 2015 and it is about time you started thinking of how you will be getting yours.

As the name suggests this is primarily designed to be a TV platform and that is most likely where you will be getting Android TV. If you are lucky enough to be picking up a new TV in 2015, then depending on which brand you opt for, you might be getting Android TV thrown in for free. If this is the route you are planning on then to sum up the options, there are three confirmed manufacturers planning on releasing TV's with Android TV this year. The first one worth mentioning is probably the most famous TV manufacturer of the three, Sony. The Japanese electronics brand have already announced that they will be including Android TV in a number of their units this year and noted that their entire 2015 Bravia range will come with Android TV built-in. The first of their Android running TV's are expected to land in late Q1. Pricing has yet to be confirmed, but Sony is likely to be the most expensive out of the three. It was rumored late last year that their android powered TV's will start from $800 and go up to $4000. So use that as a guide.

The other confirmed TV manufacturers include Sharp and TP Vision (think of this as Philips). In terms of the details for both Sharp and Philips, these are far more limited than what we know from Sony. Both were in attendance at CES and showcasing what they will release and both are confirmed by Google as partner manufacturers. Sharp did announce that they will be including Android TV in a number of their TV's this year (including their upmarket AQUOS Beyond 4k UHD TV). Sharp will introduce Android TV in a redesign of their SmartCentral software in the form of 'SmartCentral 4.0 For Android'. At the moment, prices and availability have yet to be confirmed, although Sharp's Android TV's will most likely not arrive before Sony's does. In terms of Philips, they have taken a slightly different approach to Android TV. While both Sony and Sharp have announced some of their TV ranges will come with Android TV baked in, Philips are going all in and have confirmed all of their 2015 TV's will come with Android TV. Besides the Philips-wide announcement, we have yet to hear of prices or when they will be available to buy. That said, any Philips TV you buy this year (that is a 2015 model) will offer the new platform.

Are You A Gamer?

So that is the TV offerings. But what if you don't have the money to buy an entire new TV, let alone a top of the range Bravia or AQUOS Beyond 4k UHD TV? What if you just bought a TV last year. Well, don't worry. There is always the set top box options. Now if you are a gamer then this might be the option for you. Android TV, as well as being a TV and movie focused device does offer increased gameplay and known PC gaming company Razer are bringing their Android TV option to the table. The Razer Forge TV is a standalone unit and comes packing a punch. The device obviously comes running on Android TV (Android 5.0 Lollipop) but also comes packed with 16GB internal storage and a Qualcomm Snapdragon 805 processor, along with Adreno 420 GPU. In terms of connections, the Razer Forge TV will come equipped with a standard HDMI and USB 3.0 sockets. As this is Razer, you will also be able to stream a number of your PC games including those from the likes of Steam and Origin. So this really is Android TV for the gamers out there. If this is you then the Razer Forge TV is expected to go on sale for $99. Of course if you are going down this route then you are probably going to need to pick up the optional gamepad, known as the 'Razer Serval' and this will set you back a further $80. It is expected that you should be able to pick up the two as a bundle with the price expected to be around the $150 marker. The Razer Forge TV will be available Q1 of 2015 (this quarter) so not long to go.

Last but not least, is of course, the original Android TV, the Nexus Player. If all else fails and you don't want to purchase an entire TV or are not much of a gamer, then why not go stock Android TV with Google's very own Nexus Player. This is the device that started the whole Android TV thing off and will give you all the necessary Android TV services you want. The Nexus Player is manufactured by Asus and comes running on Android 5.0 (Lollipop). Inside, the Nexus Player comes loaded with 1GB RAM, 8GB internal storage and powered by an Intel Atom 1.8GHz quad-core processor with Imagination PowerVR Series 6 Graphics. On the rear, the Nexus Player comes with a standard HDMI and a micro USB socket. Not to mention it has Bluetooth 4.0 built-in. If this is the option you might go for, then the Nexus Player costs $99 for the unit along with the remote control. If you do fancy some game time but not with the likes of the Razer Serval then you can pick up the Nexus Player gamepad for $40. Both are available now from Google's Play Store

So, how will you be getting your Android TV this year? Let us know.