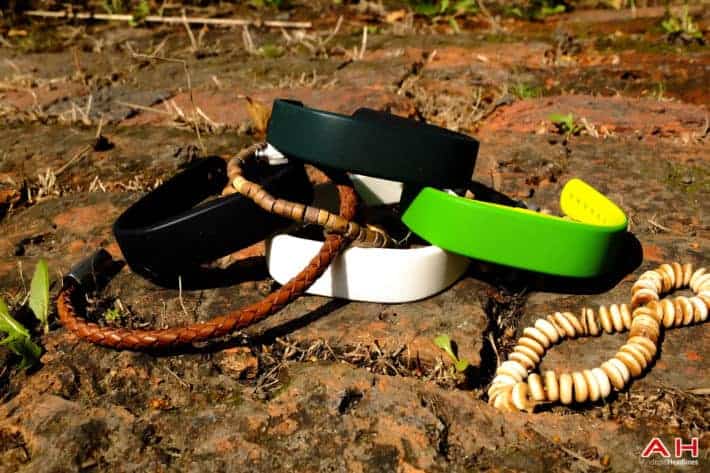 Above is the Sony Smartband and a number of random pieces of leather and other such things I throw on my wrist in the morning. Sony's offering was introduced last year (yes, it's 2015 now, folks) and while it's far from the best available, it's my personal choice. It's a pretty simple device, it tracks your steps, your sleep and your movements like anything else would, but it's the Lifelog app I love about it so much. 24 Hours a day my phone, together with the smartband, tracks my every step and activity on my phone. It's a neat way of seeing how lazy I have been, and a way of reminding myself to put my walking shoes on and get out from under this desk for a while. That's great and all, but the two things I like most about the Sony Smartband are things I feel will be important to fitness trackers throughout 2015; style and customization.

One of the main reasons I chose Sony's offerings was the ability to easily change the silicon band (which is honestly surprisingly comfy) to a number of different colors. I can wear white one day, I have a fetching orange one and of course a dark green band for all those sunny days we never get here in the UK. I'm more likely to wear something I can mix up every now and then, rather than the same colored band 24/7. The problem with fitness trackers right now isn't so much what they offer people, the latest generation of trackers pretty much do it all. It's not price either, while many of the best models are pricey you can pick up offerings for very little from many manufacturers. The problem is that these are all devices designed to be worn around our wrists, and manufacturers expect us to wear them 24/7, but there are very few attractive options. Just like many look at the G Watch and Gear Live and react with an "ugh", there are many out there that wouldn't wear a Fitbit 24/7.

The exception here is arguably the latest Jawbone model, the UP3, which was announced a little while ago. Right now it's on back-order and available in some fairly standard looks. While those two options are already quite good-looking, Jawbone has promised a myriad of configurations to come later this year; a style to suit every type of user. That's where I feel fitness trackers are heading next. It's one thing to make an excellent device packed full of sensors and such, but it's another to make it look good.

Fitness trackers are very personal items, we're expected to wear them on the same wrists we wear a dress watch, or a bracelet from a loved one; it's about time they got better looking. At its peak, the iPod was so popular because those white ear buds were fashionable, it was cool to be seen with them dangling from your lobes. A Fitbit Charge, or even the original Flex, is not an attractive piece of wrist wear. It's one of the best out there, no doubt, but it's not exactly good-looking. If these manufacturers want us to wear these things while we're at work, while we're out for drinks with friends as well as when we're out for a run or on the court, then we're going to need to see some more options. A lot more options. I bought my girlfriend a Sony Smartband and she stopped wearing it about three days later. Why? Because it wasn't exactly fashionable and people made some not-so-flattering comments at work about it. A Jawbone UP would probably have worked out better, I admit, but my point is that nobody currently offers a fitness tracker that looks good regardless, instead of looking good "for a piece of technology".

Folks like Jawbone and Fitbit have the technology, they have the software and they're good at selling them. What they need to adopt for 2015 is a little style. For the average user to really get excited about fitness trackers, they need to do better than a silicon strap available in a couple of colors.