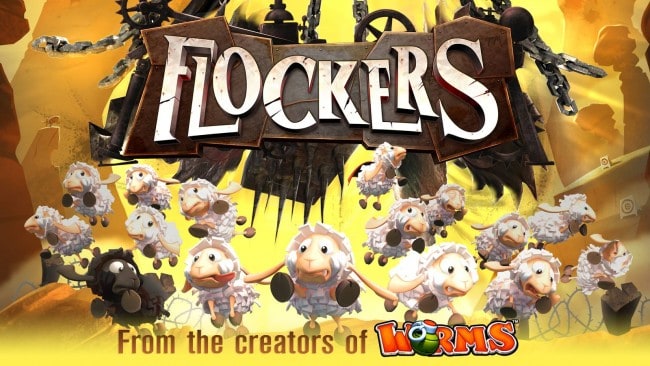 If you were a fan of the Worms titles, then you should check out Flockers from Team 17 Digital. It's a puzzle title that tasks you with guiding the sheep safely to the end of the stage while trying to avoid the malicious traps set up by the worms. Get as many sheep as you can to the end of the stage in 60 gruesome levels, unlock all 18 different sheep and attempt to gain 20 different achievements while you're at it. Flockers will set you back $1.99 if you want to give it a try.

WWE Immortals launched this past week, bringing wrestling fans some supernatural action with this super charged brawler. Immortals was developed by Netherrealm studios and Phosphor Games Studios, and it plays pretty much like Injustice: Gods Among Us which Netherrealm also developed. Your favorite WWE superstars become heroes, villains and supernatural beings as they wage war on each other. The uses the same touch screen mechanics as Injustice, and it features online multiplayer, the ability to collect a giant roster of WWE champions which you can level up to give increased powers and abilities through upgrades. Check it out the video below and you can grab the game for free on the Play Store.

Butterscotch Shenanigans. You may have heard of them. They create awesome games like Towelfight 2, Quadropus Rampage, Flop Rocket, and of course the upcoming Crash Lands which is scheduled for a Spring 2015 release. More recently the games coming out of Butterscotch Shenanigans have been free,(although TowelFight 2 started out as a paid game)and they want you to know that pay-to-play sucks.

They hate it, and they despise ads and IAP's with the fire of a thousand suns, which is why they're going back to a premium pay model starting with the upcoming Crash Lands, with no ads, and no IAP's. In addition to this, the boys at Bscotch are introducing a new system to their games called the BScotchID, which wraps up a host of awesome features for gamers like a community hub where you can add friends who also play BScotch Shenanigames, cross-game rewards, and cloud services(woo!). This system also allows them to make their games free to try, and then the full game purchase can be made with a one time purchase called a "butter up," unlocking all of the game's content. To butter up a game you need to have created a BScotch ID first which you can  do here, and because the guys at Butterscotch Shenanigans are awesome, they gave us 15 butter ups for free for you readers. They're a first come first serve so once they're gone they're gone, and remember you need to have created a BScotch ID first to claim the Butter Up. BScotch ID is in a beta format at the moment and development is still moving forward with it, but there's already plenty of promise. You can grab the butter ups here if you're ready to start gaming.

XCOM The Board Game Gets Official Companion App

Yes, XCOM has a board game, and it now has an official companion app. The companion app allows players of the board game to move their characters and grab an overview of different information within the game, like attacks, actions, and the ability to start rounds and setup your plans. If you're going to be playing the XCOM board game, you'll definitely want this companion app to enhance the experience.

The Bursting Dead Is A Side Scrolling Zombie Shooter