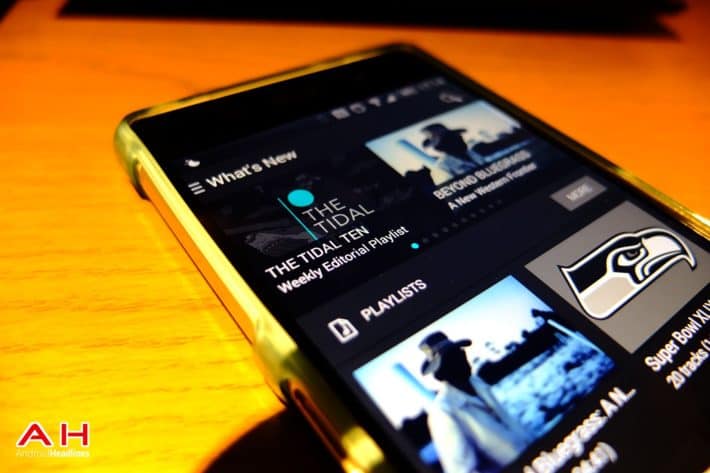 Earlier today, we reported that Jay-Z might be interested in purchasing the company behind lossless streaming service Tidal (and the whole company behind it and the WiMP service). This was an interesting coincidence as I was planning on writing about Tidal for this week's Android Audio, and it was interesting to see some of the comments in the Google+ post, which were understandably fairly sceptical or expressing no interest at all. I'm not surprised that there's scepticism surrounding Tidal and its lossless streaming service; after all the same album, recorded in the same studio can't sound that much different regardless of its bitrate, right? In today's Android Audio, I'll hopefully be able to offer some insight into whether or not the service is indeed worth it and why you might like to give it a try.

I'll preface this all by saying that until I switched to Tidal, I was a diehard Google Play Music All Access user, and couldn't really ask for much more out of a streaming service, that is until I tried out Tidal. All the music we stream to our phones or tablets are basically the files we used to store on an iPod or MP3 player, we just don't keep them on our devices any more. Google Play (and most other services, like Spotify) streams files at 320kbps whereas Tidal streams at 1411kbps. I really don't want to get into a conversation about bitrates and sample rates, but all you need to know is that Tidal isn't compressed music. MP3s and AAC files are compressed, it's sort of like stamping on a can to get more cans in the same bag; it's convenient but the can isn't quite all it used to be.

This means you do need to have more bandwidth to stream these FLAC lossless files, but in my experience over the last few weeks you don't need as much bandwidth as you think you do. I was able to stream lossless music over HSPA+ and 4G networks without any trouble at all. With that out of the way I'll try and describe the service and its Android app.

The Tidal app is a nice-looking affair, it's decked out in a dark theme with some nice typography and it's certainly a nice change from the orange and whites of Google Play Music, but this is perhaps more of a personal thin. Searching for music is really easy and that part of the service works great. There's no way to build a library in the same way as Google Play, but you can favorite things as you would with Spotify. I prefer to listen to full albums rather than playlists, so I favorited a number of artists and albums to then quickly dig up again in the "My Music" section. So far, so good.

Things start to feel a little less unpolished the longer you use the service for though; the app isn't exactly speedy and there's definitely some improvement where speed is concerned. That, and I didn't really like having to favorite each and every artist and album that I wanted to add to a library. There's no learning of what I like here, or recommended releases or artists, just "similar" links. Once you get used to things though, it starts to feel like any other streaming service app. On tablets though, things are really quite impressive and this easily beats the Google Play Music app on use of space.

So, on to sound quality and what there is to listen to. There's a pretty excellent selection of music available in Tidal. I was able to find some of my current favorite artists like CHVRCHES, Taylor Swift, Royal Blood, Damien Rice, Purity Ring, The Wombats, Gabrielle Aplin, Bastille, the Blackout and more with the majority of their catalogs available to stream right away. I also liked the playlists available as well, I'm not a huge fan of these, but the selection here is definitely carefully thought out and put together. Tidal Tuesdays and the Tidal Ten are both excellent ways of discovering new bands and fresh music (I found Purity Ring like this) and while the radio feature from Google Play is perhaps more accessible, this is really nice to have every week.

As for sound quality, I was genuinely surprised when comparing things to Google Play Music, which I still maintain has one of the better qualities of streaming services out there. The whole "lossless v. lossy" debate has gone on for so long now I'm not interested in getting into how good my hearing is or whether or not that extra data is a waste. Here's my honest outlook on Tidal's lossless music; I think I can tell the difference I'm pretty certain that I can and it sounds better to my ear, and that's good enough to me. The soundstage sounds wider, and separation between different instruments is much clearer. As are underlying bass guitar tracks and other sort of ambient sounds. It's genuinely difficult to explain through written word, but all I'll say is that everything sound more full bodied, there seems to be more going on here and the stereo effect is really quite good, too. Take my description for what you will, but if you care about how good your music sounds, then this is something to look at.

Is Tidal's lossless service worth almost twice that of most competitors? At £19.99 and $19.99, it's not cheap, that's hard to deny, but the way I look at it is that say I were to download music at £7 an album or so, by the time I've bought three I may have just signed up for Tidal. This is most definitely not for everyone, if you're listening in your car or at your desk with fairly low-end hardware or you just don't think there's anything wrong with Spotify, Pandora, Xfinity, or Google Play then this isn't for you. I'd say that "it depends" when answering my opening question. Tidal isn't just for streaming from your phone or tablet, even though it sounds great there, instead it can scale to sound great at your desk with a DAC and a decent set of headphones or speakers, it also works with all manner of high-end HiFi equipment, so while you're paying extra you're getting better sound quality and more flexibility.

If you're like me, and you listen to lots of music all month long, then Tidal would be well worth it in my opinion. However, if you're just in it for listening from your phone or in your car, then you might not get the full offering that Tidal has for you. You can try Tidal for 7 days for free (a disturbingly scant amount of time in my opinion) and you can find out more from their website.