We’ve already covered the Alcatel smartwatch in the last few days but we now have more details about the product. The first thing to discuss is the price, which starts at $149. Just $149 is perhaps a more accurate expression: the metal strap models will cost slightly more, but the price is expected to stay below $180! The Watch supports both Android (4.3 Jelly Bean or later) and iOS (iOS 7 or later) operating systems and it’s a round design with a certain aesthetic. As one would expect, the Alcatel Watch is controlled through a companion application on either the Android or iOS device, which is where users can set the notification types, view health data and change the themes and color scheme of the Watch. The application takes advantage of Android’s flexibility as any application that supports notifications can send them to the device (this is impressive) whereas with the iPhone, only the messaging, ‘phone and mail apps are currently supported.

The interface is controlled by tapping near the bottom edge of the Watch front. It’s motion-activated, too; when you raise your wrist, it reports the time and tapping cycles between the watch face and the menu. At the moment, the user interface isn’t as fluid as an Android Wear device but the operating system and underlying hardware is quite different. One payback is in the battery life department; there’s only 210 mAh (almost half that of the larger Android Wear smartwatches) but battery life is given as between two to five days by Alcatel, depending on the circumstances. It’ll be available in a black and red combination, or white, immediately with two metal options due later in the year. The Watch uses the second best charging method, a MicroUSB port (the best option we’ve seen so far is the Moto 360‘s wireless Qi charging solution). In terms of the other hardware, the Watch comes with a 1.2-inch near-circular color touchscreen. The processor is the STMicroelectronics STM429 unit and the Watch is IP67-certified, so it’s as life proof as we should be expecting from our smart wearables. There’s NFC to help you pair the watch with your Android devices (iOS doesn’t support NFC pairing)

The Watch has a built-in heart rate monitor, accelerometer, gyroscope, altimeter and compass and may be used to monitor sleep cycles, steps or activity, distance traveled and estimate the calories burn. It can be used to control the camera or multimedia playback. You may set the device to vibrate if you move too far away from your smartphone. As such, it has the usual software features without, in Alcatel’s words, the pain of early adopter software (meaning Android Wear). And I have to write that the smartwatch is interesting: I especially like that whilst it does less, Alcatel haven’t squandered this by giving the device poor battery life, but instead it looks stylish and usable. Go Alcatel! 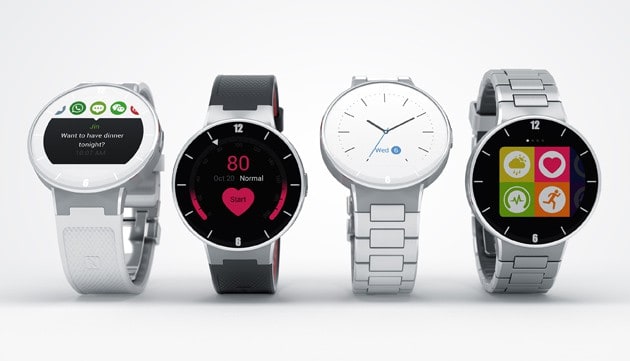