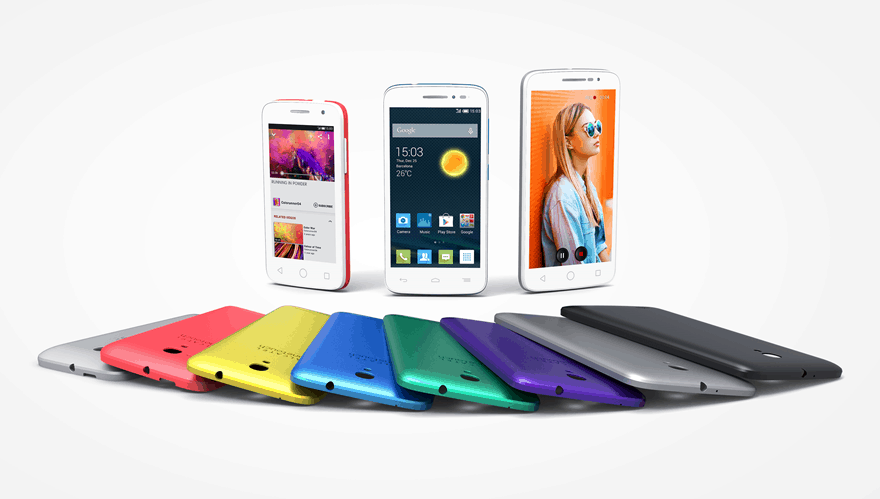 It's CES once again and while the show has already got started with a number of releases from the likes of LG and ASUS, there are more than just the big names announcing new smartphones and other mobile goodies. Alcatel Onetouch is a company that many of you might know of, who have become known for releasing budget-minded hardware with pretty decent overall experiences. They've been doing this their 'POP' line of devices, and during CES 2015, they're announcing a trio of new smartphones to add to the line. Coming in 4, 4.5 and 5.0-inch versions, they all share common DNA and will be available later this year. All of them feature Cat 4 LTE support and offer 4G speeds at a much lower cost than many competing handsets.

Each of the four handsets is powered by the Snapdragon 410, itself a 64-bit 1.2 Ghz quad-core CPU and they're all happily running Android 5.0 Lollipop, which is fairly impressive for budget handsets like these. Starting with the baby of the POP 2 family, the diminutive POP 2 4 features the same 1.2 Ghz CPU with 1GB of RAM and 4GB of expandable storage. Its 4-inch display is a pretty disappointing 800 x 480 affair, but with a 2,000 mAh battery this little guy should keep running for some time. It'll be available in a number of different colors with replaceable back covers available to spruce things up. On to the slightly larger POP 2 4.5, and we're looking at essentially the same device but with a slightly larger 4.5-inch display with an 854 x 480 resolution. Both the 4-inch and 4.5-inch versions feature a 5-megapixel rear-facing camera as well VGA front-facing cameras.

On to the larger, 5.0-inch POP 2 and things become a lot more exciting. While the overall design and specs are the same here, the POP 2 5 gains a Full HD display, which is 1920 x 1080 and a fairly large step up from its smaller brothers. This version of the POP 2 will also be available in a premium edition which features an aluminum frame to beef things up a bit. The POP 2 5 features an 8-megapixel rear-facing camera and a 2-megapixel front-facing camera.

All of the new POP 2 smartphones will have flip covers and other accessories available when they go on sale later this year. While no concrete launch date has been given for the POP 2 line, we're sure they'll be launching a little later on this year.

Advertisement
Trusted By Millions
Independent, Expert Android News You Can Trust, Since 2010
Publishing More Android Than Anyone Else
7
Today
110
This Week
218
This Month
4203
This Year
105680
All Time
Advertisement