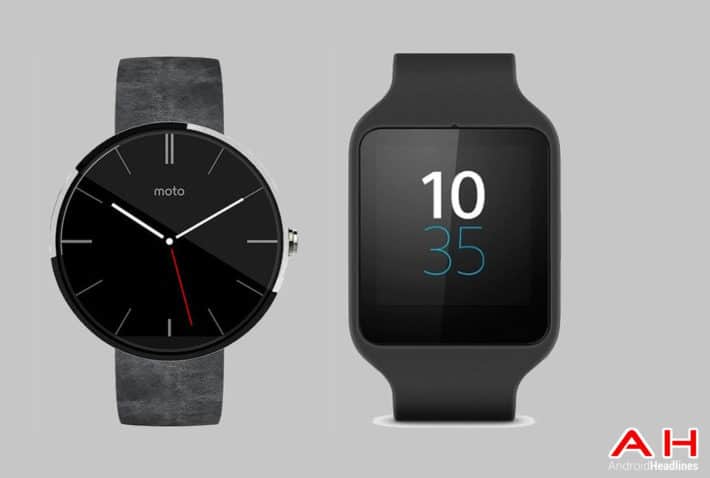 Do we have a good one for you today? The answer is yes, we do – the new Motorola Moto 360 smartwatch versus the new Sony SmartWatch 3.  Both of these devices are brand new and battling for your hard-earned Christmas money this season and with price tags of $250, you want to make sure that you make the right decision on which one to purchase.  Although made by different companies, these two devices do have many things in common.

Both the Moto 360 and Sony SmartWatch 3 (SW3) will give you the time…and a whole lot more.  They both us the LCD display technology and the displays are fairly close in size.  They both work with 512MB of RAM and 4GB of internal storage with no room for expansion.  Both have Bluetooth 4.0, both carry a Gyro/Accelerometer/Compass, they are both water and dust resistant and most of all, both are part of the Android Wear family.  You can buy either one in the Google Play Store for the same price – $249.99.

Possibly our comparison can help you make the decision on which one to buy – please go through the detailed specifications shown below in our chart and then we will go through and look at each device and list some pros and cons that will hopefully make our decision and your decision easier to choose a winner in this smartwatch comparison. 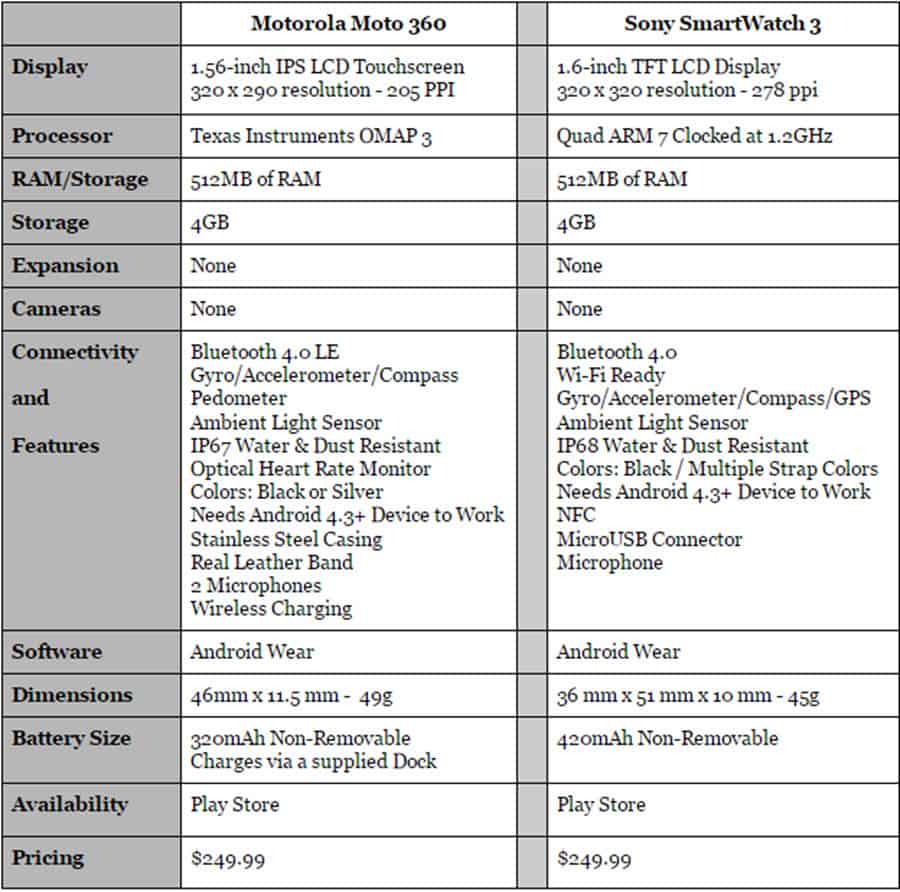 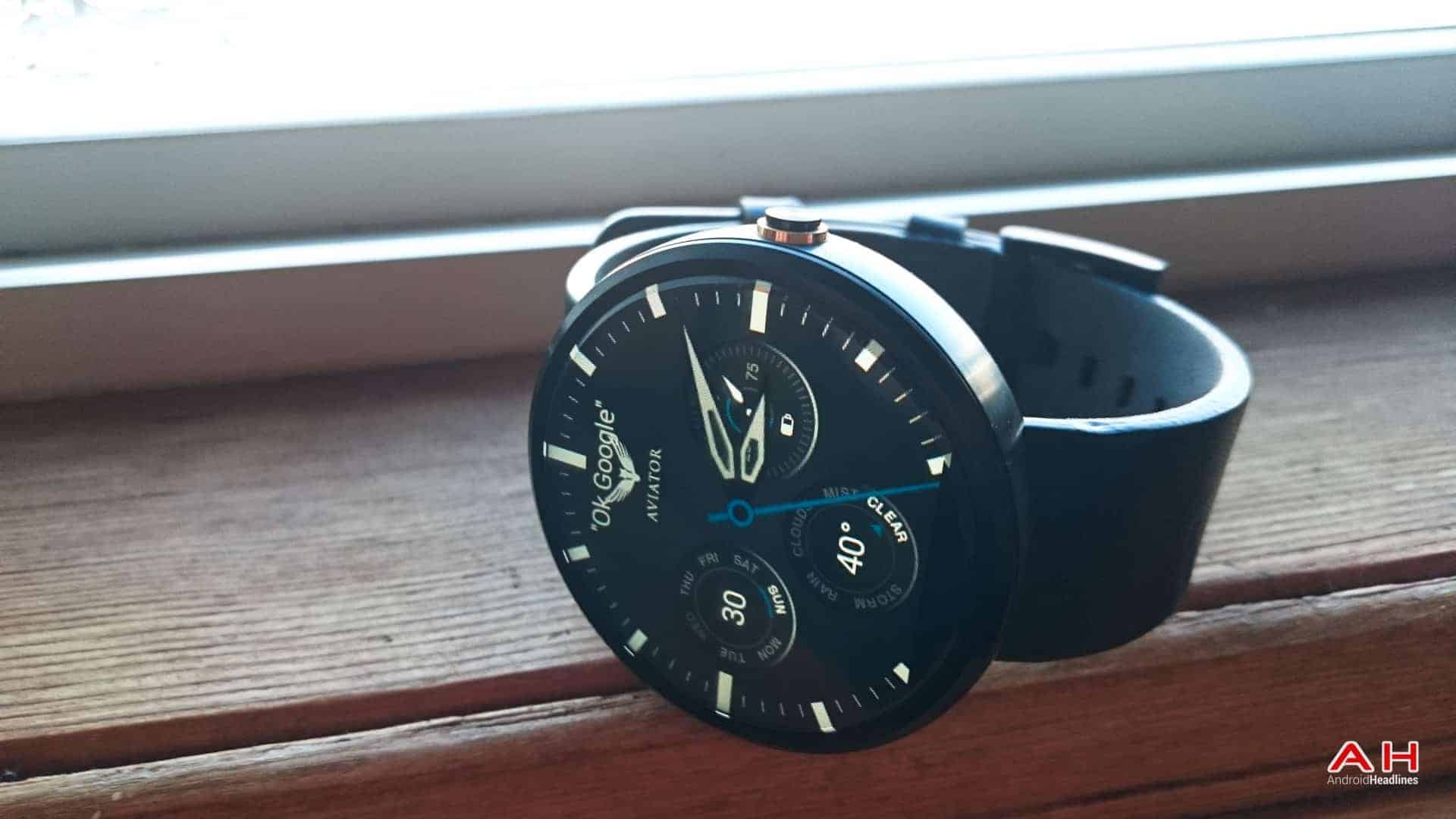 The new Motorola Moto 360 was one of the most anticipated devices released in 2014 – Samsung, LG and Sony were churning out new smartwatches as Motorola seemed to be dragging its feet.  Motorola released pictures and we instantly fell in love with its retro round look – the first smartwatch to look like a fine timepiece with its stainless steel bezel and real leather band…the Moto 360 definitely looks like a fine piece of jewelry when compared to the rather austere look of the SW3.

The Moto 360 has a round display that measures 1.56-inches with a resolution of 320 x 290 pixels and 205 pixels-per-inch (PPI) and although completely round, there is a sliver of black at the bottom of the display.  The Moto 360 is powered by a Texas Instruments OMAP 3 and the only thing stunning about it is that Moto chose that processor over a more traditional and proven Snapdragon.  As I said earlier, it does pack 512MB of RAM and 4GB of internal storage.  Another area of concern is the 320mAh battery – Motorola claims you can get a full day out of it, but our full review does not bear that out for someone that gets a lot of notifications or emails.

The Moto 360 acts as a pedometer and a heart rate sensor and uses google maps (of course) for navigation assistance.  It also uses the Google Now voice commands (OK, Google) and is seamless with its interaction.  The device comes in either silver or black with a real leather band that can be interchanged with third party bands, even metal.  The Moto 360 carries two microphones for great voice pickup, even in noisy areas.  Running Android Wear, it must interact with any Android smartphone that is running Android 4.3 or higher.  It comes with a nice wireless charging dock you can just ‘toss’ your Moto 360 on at night to charge.  It is available in the Play Store for $249.99 with the leather band and when metal options are available, they will cost $299.99. 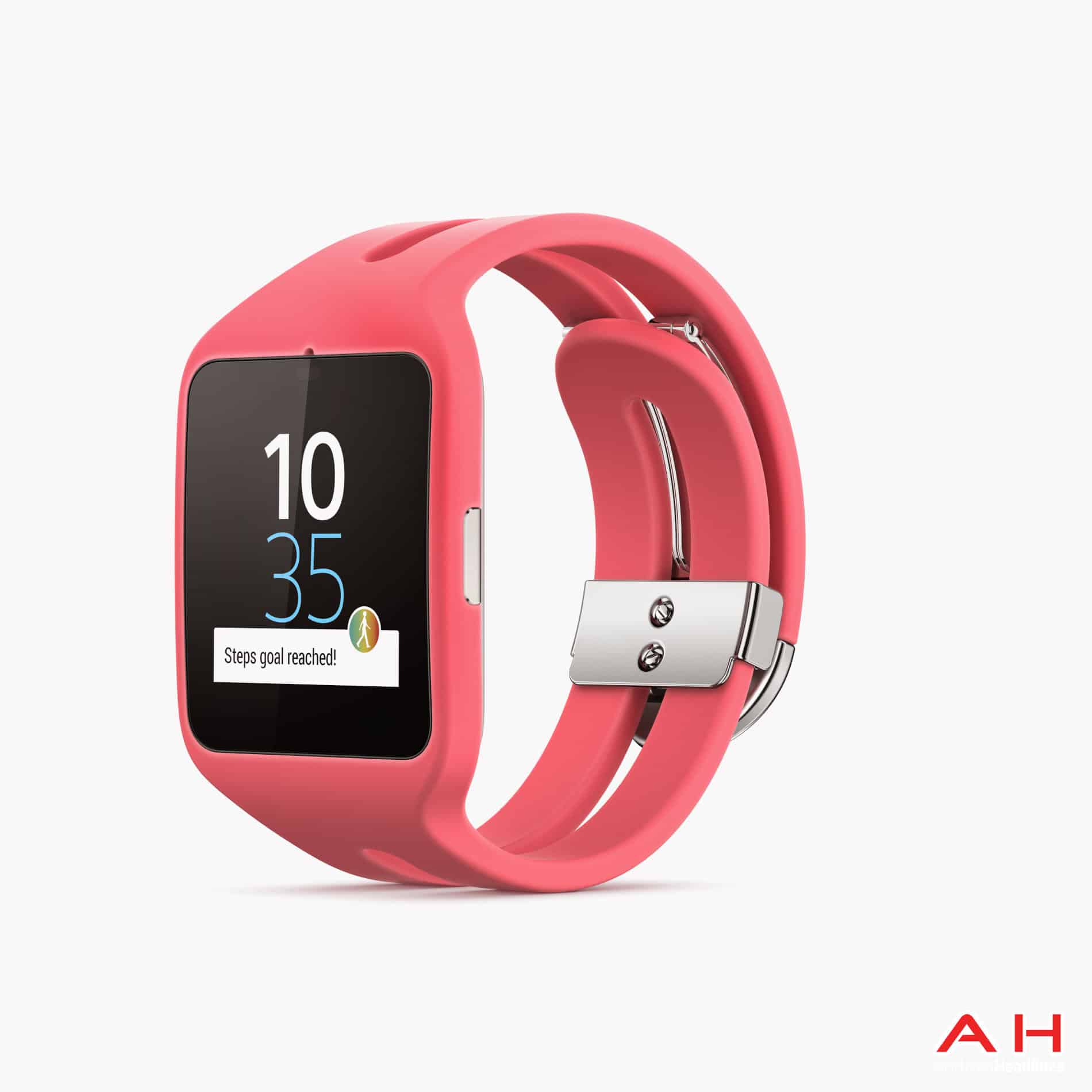 Sony has a long history in the smartwatch field and we are happy to see that Sony chose to go with Android Wear this time around.  The new Sony SmartWatch 3 (SW3) took the route of using a silicon rubber-encased body with the standard smartwatch rectangle and colorful, interchangeable bands that the main ‘head’ snaps in and out.  Sony definitely went after the younger, hip-hop crowd with a more playful approach while the Moto 360 goes after the sophisticated crowd.

The Sony SmartWatch 3 comes with a 1.6-inch Transflective (TFT) LCD display that helps with glares on the display.  It has a resolution of 320 x 320 pixels and 278 PPI and is certainly better than the 205 PPI on the Moto 360.  The SW3 sports a 1.2GHz quad-core ARM A7 processor along with the same 512MB of RAM and 4GB of internal memory.  The SW3 uses a larger, 420mAh battery that Sony promises will get you through 2 days before you need to charge it via a standard microUSB port.

The Sony SmartWatch 3 can also be used as a pedometer and the SW3 can also sync playlists from the users’ smartphones to their SW3, so you can leave your phone at home and still listen to music as you run.  With the Lifelog App, users can count steps, measure calories burned, gauge heart rate and even track sleep patterns.  It is a reliable GPS tracker that can monitor your run or walk without the need of the GPS in your smartphone.  It is also NFC capable and Wi-Fi ready.  It too needs any Android smartphone running Android 4.3 or higher, can be purchased in the Play Store for the same $249.99 price tag. 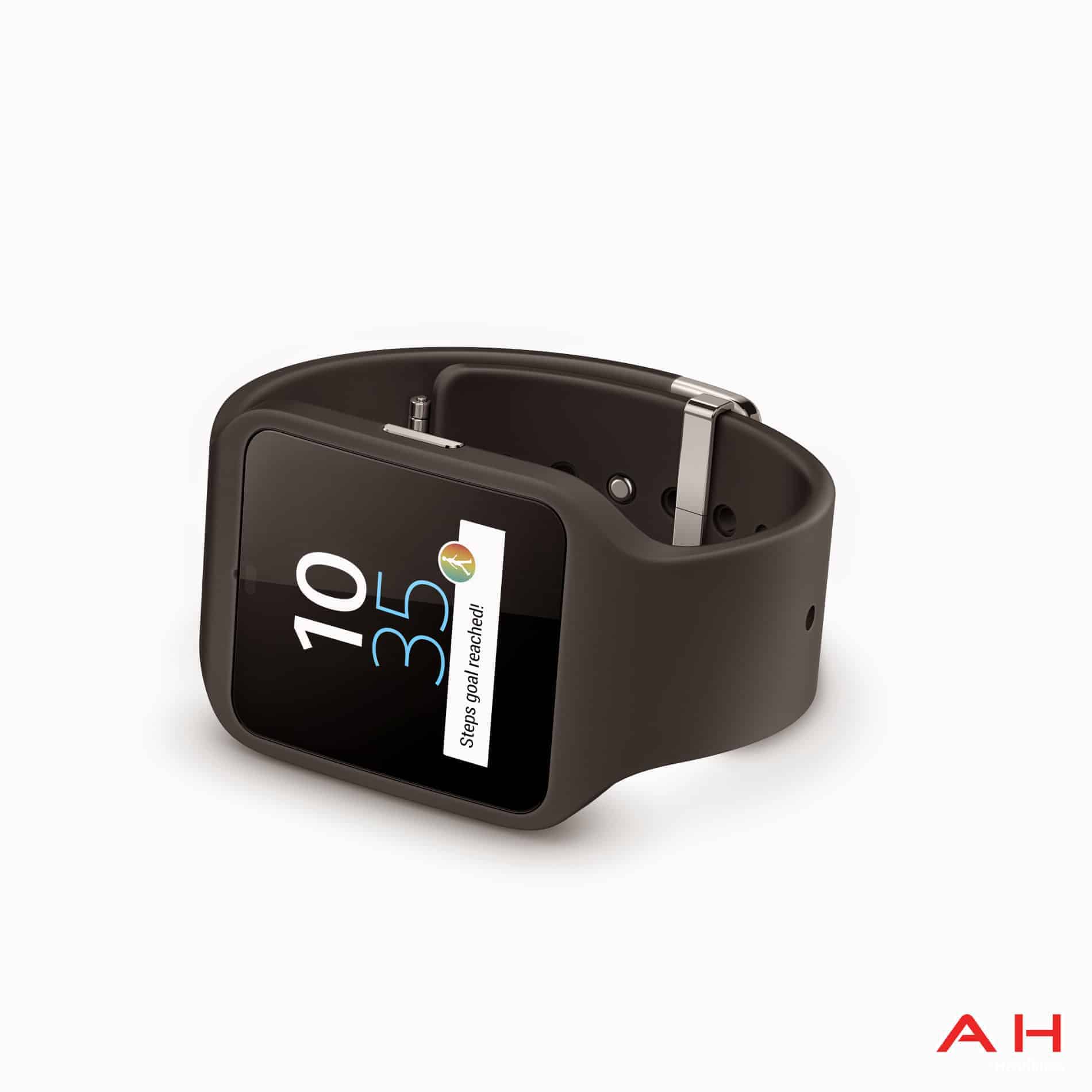 Yeah, me too!  I am just as shocked as you that I picked the Sony SmartWatch 3 as the winner (I even had to change the picture, as I pre-picked the Moto 360.)  After going through all of the specs and features, I had to choose the SW3 as the winner of this comparison. If we were going strictly on looks, then the Moto 360 would win as an easy pick for me, as I love the looks of the device and there are some kickass clock faces as well.  The SW3 just does nothing for me in the looks department…I guess it’s because I like metal on my watches and the all black is just too minimalist for me.

However, when it comes to the speed and smoothness of the processor and long battery life – which I think are especially important in a smartwatch – the SW3 wins those categories.  The SW3 also has several more features than the Moto 360, such as a standalone GPS when running so that you do not have to take your phone with you to track your activities, as well as NFC and Wi-Fi ready.  Being that they are the same price makes it even easier to pick a winner.  If you want a smartwatch that is most like a fine timepiece to wear at fancy parties, then the Moto 360 is for you, but if you want a smoother interface, longer battery life and something you will feel comfortable wearing at swim parties or get togethers and like wild colors and options, then the SW3 is for you.

Please hook up with us on our Google+ Page and and let us know which one of these great smartwatches you would chose and WHY…as always, we would love to hear from you.