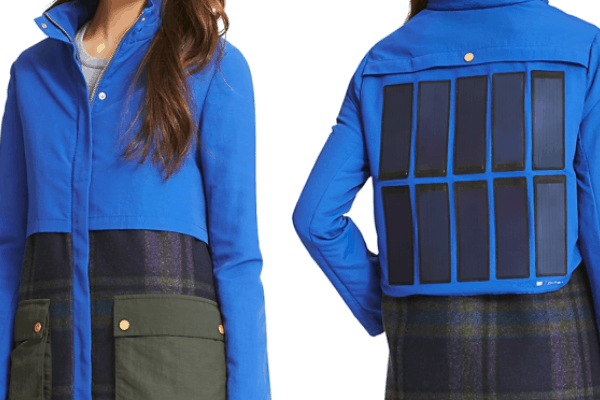 Chances are you've probably heard of Tommy Hilfiger, and while they've always been a brand willing to try out new things, they've entered the 21st Century with their latest products. Teaming up with solar firm Pvilion to develop a pair of jackets, one for men and one for women, that feature solar panels to charge your devices. Both jackets feature a tartan design to them, with the ladies jacket sporting a blue upper. The solar panels are both water resistant as well as flexible, and can be removed whenever you'd like. When attached to the jackets, there's a cable that runs through the jacket to a battery pack in one of the pockets, which can charge two devices at once thanks to the two USB ports inside.

As you'd expect from Tommy Hilfiger, let alone a jacket that can charge your phone, these won't be cheap and cost $599 (or £278 for those in the UK) and will be available in limited quantities directly from Tommy Hilfiger's website. Some 50% of each sale will go towards the Fresh Air fund. So, who are these jackets for? Well, not everyday folk I'd imagine, but more for those that go hiking or who might be traveling. Basically anyone that's going to be away from a wall outlet for a long time will get the most out of these, and the battery pack inside – while not explicitly named – will apparently charge a 1,500 mAh device four times on a full charge, so that's not too bad we suppose.

At $600, these guys aren't cheap, no doubt about it, but it is interesting to see a brand like Tommy Hilfiger experiment with solar power. After all, we have this power source just hanging above our heads waiting to be put to use and it's about time that we did something with it. A decent idea for hikers, those who spend a lot of time outdoors and travelers, either the men's or women's jacket is pretty good-looking. You can see more in the gallery below and order your own at the source link.