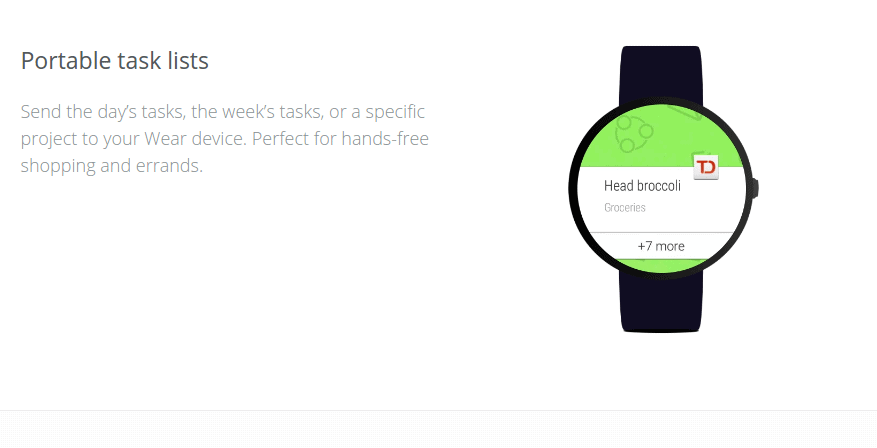 There are plenty of todo list apps for Android, but one of our personal favorites is Todoist, and I use it every day to get my job here at Android Headlines done properly. It's not a miracle worker of course, but I've tried Evernote, I used to use Wunderlist a lot, but the only one that stuck was Todoist. Now, the developers are updating their Android app with support for Android Wear, including voice control and the ability to 'push' task lists to your wrist. I've had chance to play around with a test version of the new app and I have to say the implementation with Android Wear isn't perfect, but it's a solid expansion into wearables.

As you might have expected, Todoist brings voice control to Android Wear, so you can now ask Android Wear to "Start Todoist" and "Add task", just as you would from your phone or computer. That part of things is neat and straightforward, but actually getting your tasks on to your wrist requires a little more work. From your phone, you just hit the settings menu and hit "Send to wearable", which will then add that list of tasks as a card to your watch. From there, you can mark tasks as complete, schedule and open them on your phone. This is clearly going to be most useful for time sensitive type tasks, or getting a list of info you need right there and then. This will allow me to use Todoist for shopping and checklists while on the move, something that Keep has been fulfilling before this.

Elsewhere, notifications are now more targeted for Android Wear. They no longer appear as generic notifications as they used to, and you can much more with them. Swiping right has a lot more options available to you, and contextually aware tasks will appear on your wrist when you're close to their location. All-in-all, this is a great improvement, especially for those who've signed up for Todoist Premium. Now your Android Wear watch can take advantage of those extra features you pay for.

You can read more about Todoist and Android Wear from Todoist's website, as well as from the video below. If you haven't tried it out yet, Todoist is free to download from the Play Store.