Herman's Gaps is an Android game that focuses on simple, yet fun gameplay that requires you to jump through the gaps in moving brick walls. The game's premise certainly sounds simple on paper, and indeed there's not too much to the whole game here, but it's the gameplay that matters. Timing is very much at the heart of Herman's Gaps and in order to be successful, you'll need to choose your moments carefully and later on you'll have to avoid certain tools and obstacles. A simple, yet enticing game designed for those of all ages, Herman's Gaps is a game that doesn't ask too much of the player and could be an excellent title for casual gamers.

Much like other Android games, you just need to download Herman's Gaps from the Play Store and then open it up. 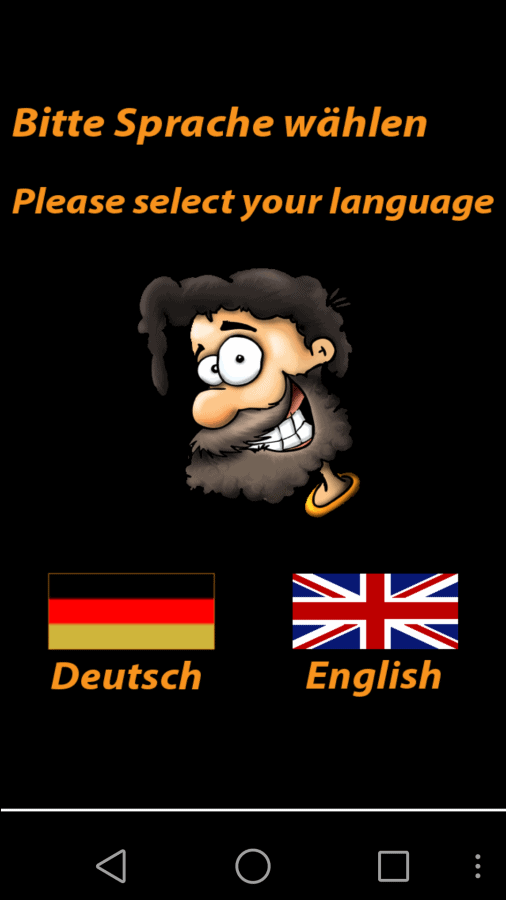 Once you've chosen your language – a nice touch from a German developer – you can go ahead and start playing. 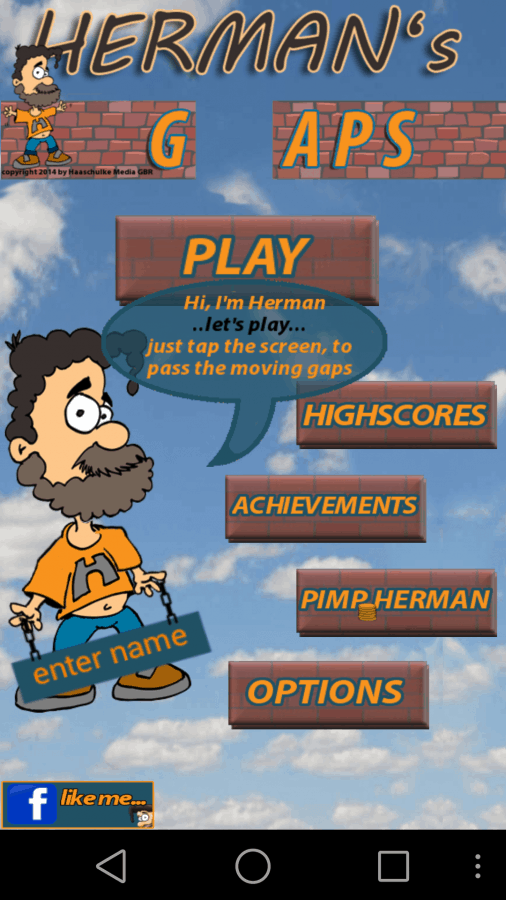 Right away, it becomes clear that the UI of Herman's Gaps could do with some work. Menus are a little clunky and the text doesn't seem to quite fit. 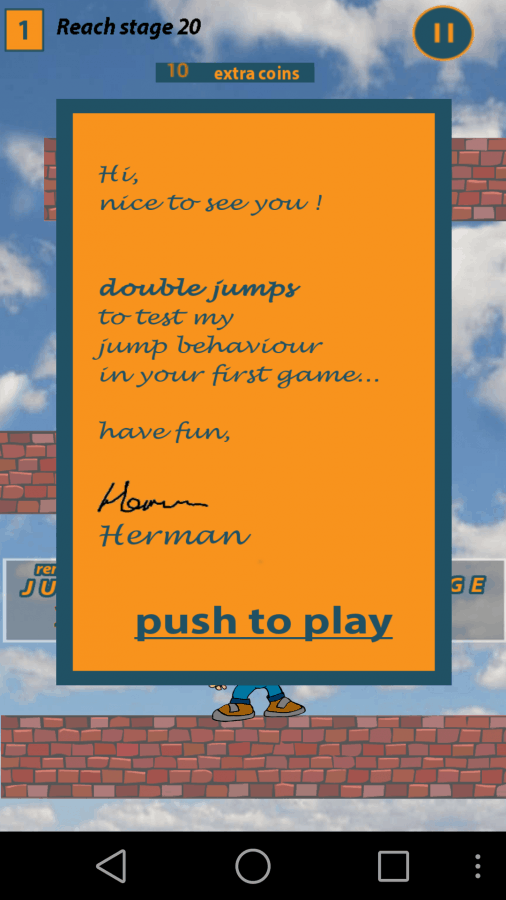 Of course, once you get into the rhythm of the game, you soon realize there's more to it than its looks. The timing aspect of the game is really well done, even if it is simple and a retro throwback. I found it fun, and the game can lull you into a false sense of doing well, and then keep you trapped, just waiting for the wall you're standing on to keep flashing red before you fall. 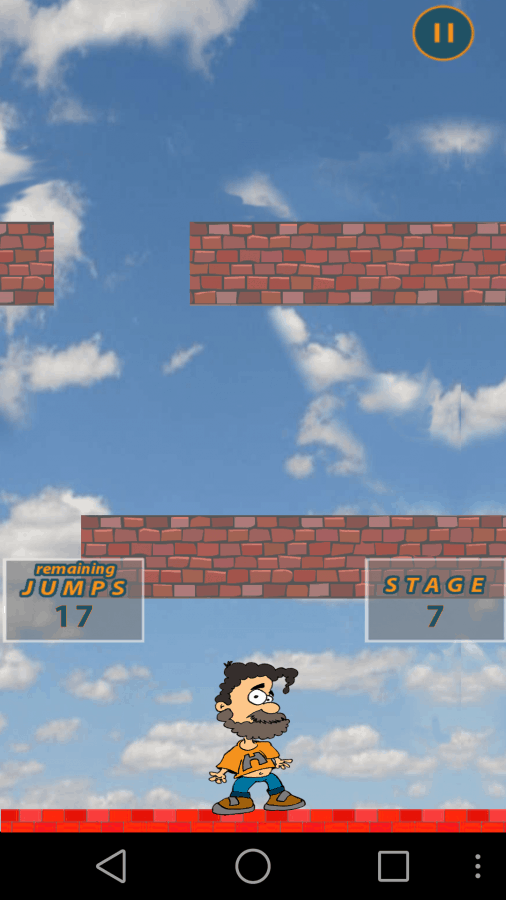 The further into the game you get, you'll have to dodge certain items, that are red, and collect the green ones to gain more jumps. 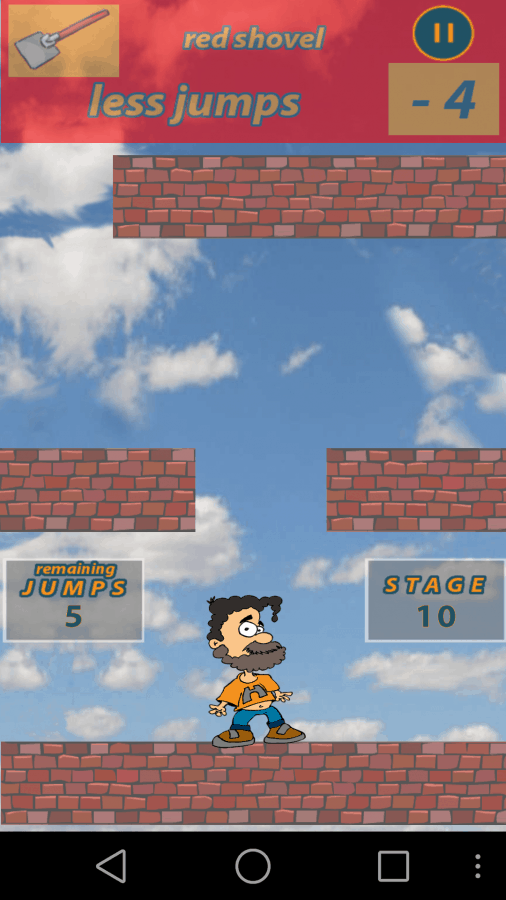 There are achievements included here as well, which is a nice touch and each level earns you coins to unlock items to "pimp" Herman. If you manage to unlock all 20 achievements you get to see the 'Tetris Retro Revival Rocket' a nice sort of easter egg for complete all the achievements. 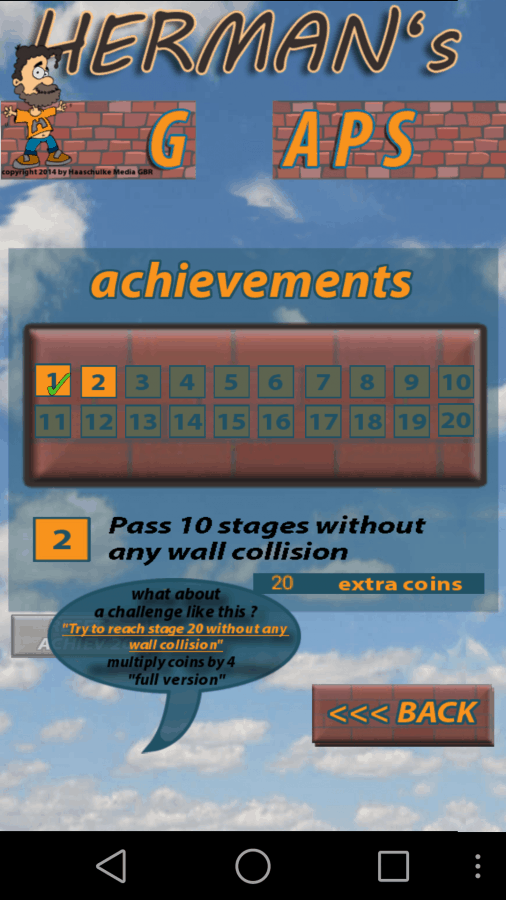 If you want to purchase the full version, you get twice the amount of coins per level, as well as an additional 1,000 coins to spend on items to pimp Herman. 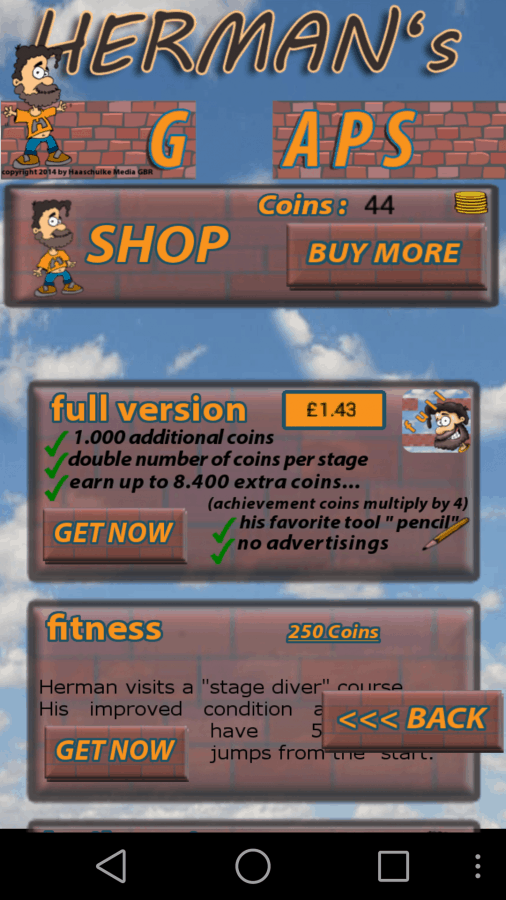 There's a lot of Flappy Bird here, which is a shame to say, but it's also true. Thankfully though, other touches like the limit on how many times you can jump before running out of jumps, and the sinking bottom wall all make this a slightly more challenging game. Where Flappy Bird and co feel like an exercise in futility, this has a rhythm to it, and if you can time your jump well, you'll be rewarded. The menus and UI in general need cleaning up, but there's not too much to complain about here. With some higher-resolution assets and more attention to detail, the overall game would look and feel better. Having said that, I had fun with Herman's Gaps and while it did remind me of retro classics, I found nothing wrong with that.

All-in-all, Herman's Gaps is what it is, it's a free to play game that's a sort of retro throwback and it doesn't ask too much of its players. It's fun, simple to play and is fairly challenging. It's clear that it needs a little work, but as a game that harks back to the golden days of gaming, Herman's Gaps is good fun, and with the achievements included there's sort of a purpose to keep on playing. I enjoyed it, and while it's not all that easy on the eyes, it's only a free download away to give it a go.