Yappy (previously known as EndlessJabber) is an Android app and service for Android that enables users the ability to send text messages from any laptop or PC or their Android tablets using their already existing phone number. It's not just that though, as Yappy features an element within it to send messages to other Yappy users using the Internet, outside of SMS. Essentially giving users a WhatsApp type app with SMS integration all rolled into one. With tight integration with the popular EvolveSMS (as well as the ability to use most popular SMS apps), a quality web app and an app for tablets as well it sure looks like Yappy has a lot to offer, so join me as I take a closer look.

Setting up Yappy is a little more complicated than it really ought to be, but you could say it's worth it when you do get it all set up. Your first step is to download Yappy from the Play Store. Depending on whether or not you're going to use Yappy with your PC or a tablet, your next step is to head to www.yappy.im/web and sign in with the same Google account used on your smartphone. Getting things set up on the phone is pretty simple though. 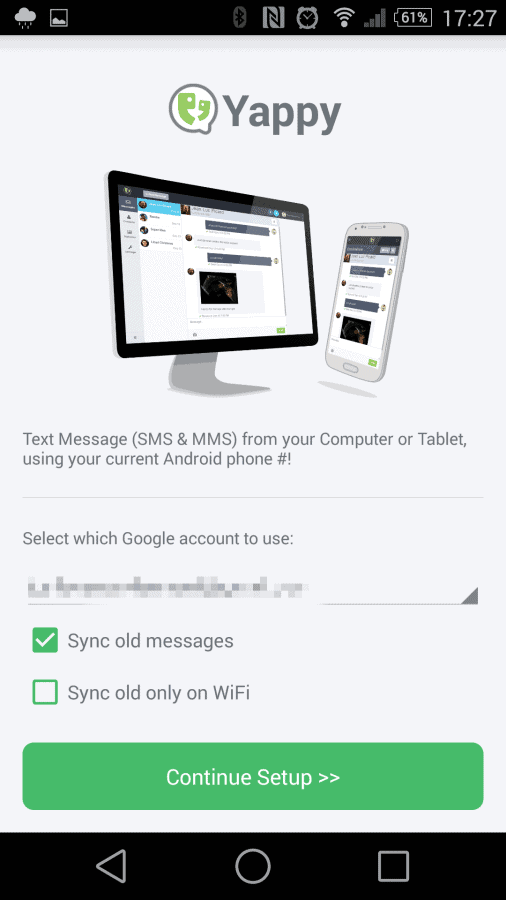 You can select which Google account to use and then continue further, with some introductions to what the app can offer and such. 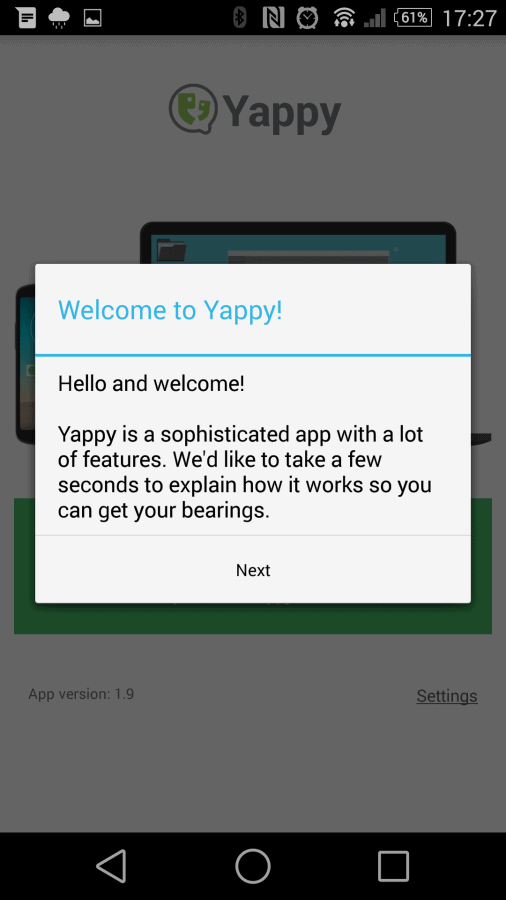 There are then some settings that are worth paying attention to, as well as a hint that could offer you better integration with EvolveSMS. 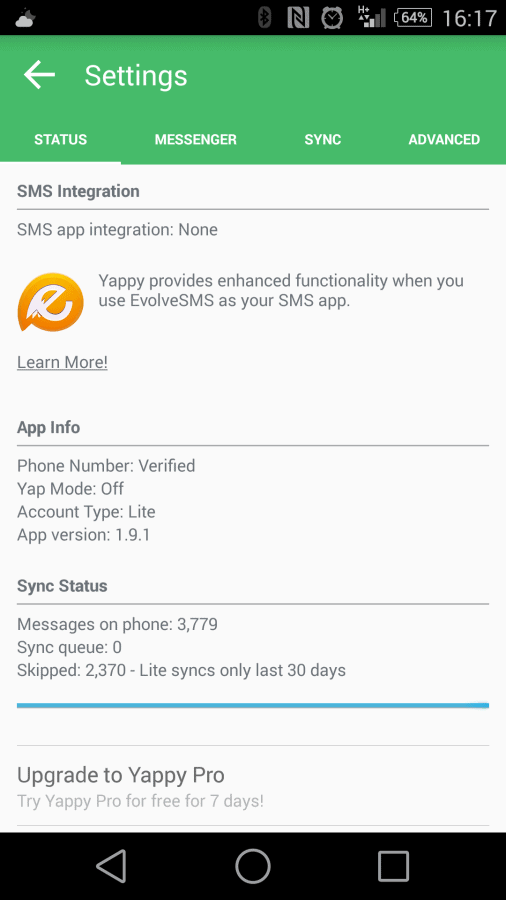 You don't have to use EvolveSMS, but I ran into some problems with other messenging apps, like the official SMS app from Google, for instance. The next part – if you're looking to send text messages from your PC is to either install the Chrome extension, or head on over to the Yappy.im website. There, you'll be able to see a big list of all your text messages from your phone. Now, if you choose to use the webapp like I do, you'll see something like this on your desktop. Here, we can see that I'm able to see my conversations on the left-hand side, and I can send SMS messages back to friends and family there and then from the computer. 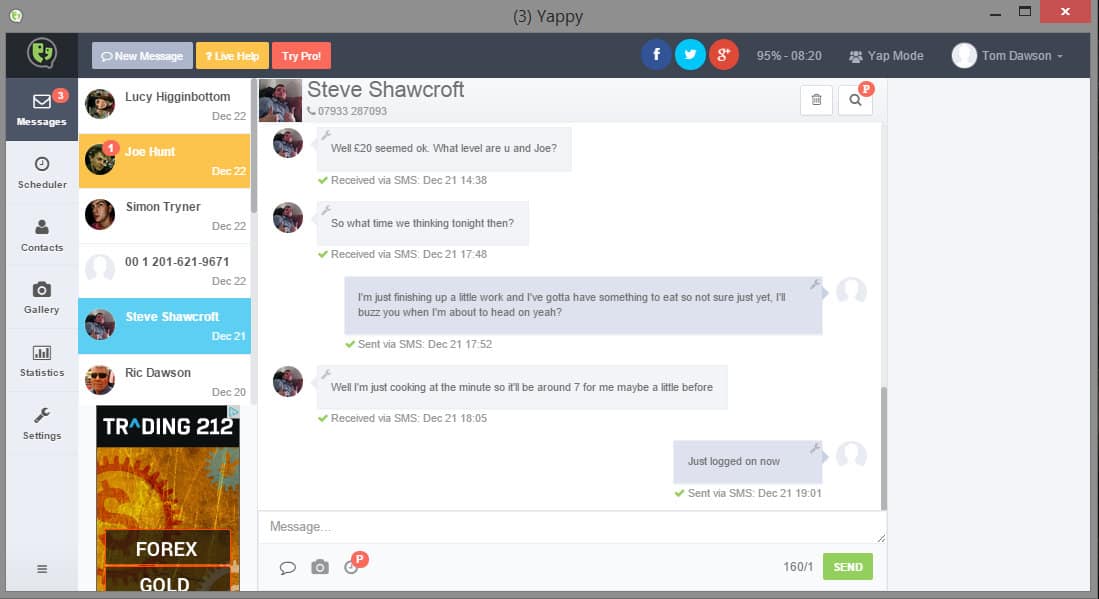 Another key feature of Yappy is its ability to function on its own without the need for SMS. This feature is currently in Beta, but you can enable it from within the settings by enabling the messenger. 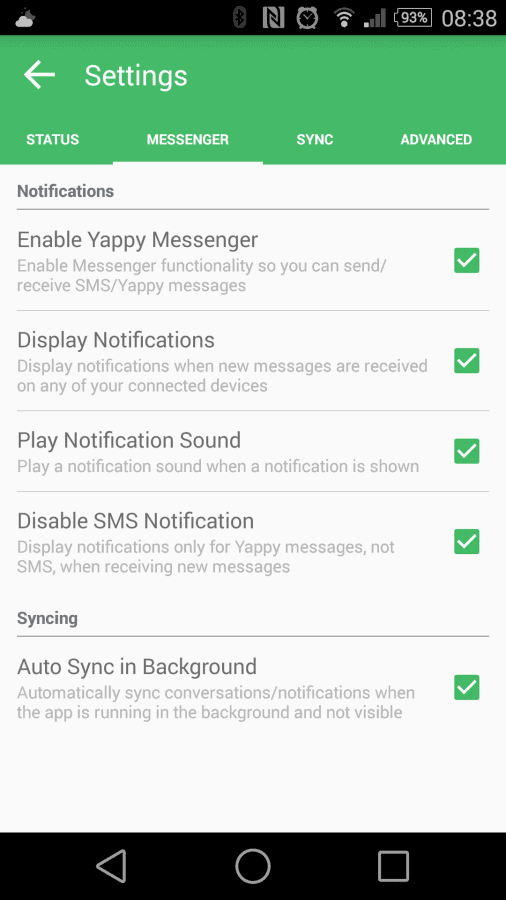 In order to keep things running smoothly, there is a mode called "Yap Mode", which creates a more frequent sync to the server to make sure messages are sent even quicker, but this is a Pro Only feature. With a free 14 day trial and a very small cost a month though, this might be well worth it. 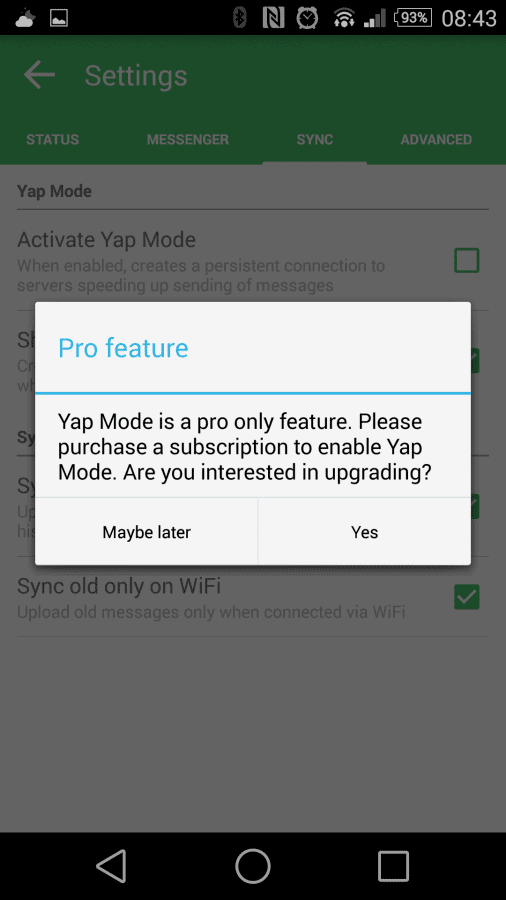 To me, it seems like Yappy is an app that does a lot of things really well, but can't quite seem to get the core functionality right. I had a pretty rough time getting the app up and running, but considering the app's developer is a responsive kind of guy, I can't complain too much. After all, Google did kind of turn SMS apps on their head with the launch of Android 4.4 KitKat, and it makes things pretty difficult for this sort of thing. Still, Yappy might have been slow for me, but I did get it to work eventually and considering that I use a laptop all day for my job, being able to text from my desk is a nice feature. It not only saves me time, but I'm no longer distracted by something else I see on my phone. Sadly though, there isn't too much that's original here, there are a number of decent apps available for Android that will offer this sort of thing. Having said that, Yappy seems a polished product, the Webapp is sophisticated and with a messenger of its own in testing, the app seems destined to only get better from here on out.

When it comes down to it, I'm sure that Yappy is going to be a great find for a lot of users, it's easy to use, has a sophisticated webapp and can speed up your day. The majority of my friends and family still use SMS to communicate, which is great because I can use my PC while working to stay in touch without getting distracted by picking up my phone all the time. There are other apps out there that do similar things, but Yappy is one of the more sophisticated apps I've come across. I just wish that it worked a little better, rather than being quite so slow. I'm sure fixes are on their way though, and the developer is hard at work to answer questions and provide help, which is a lot more than we can say for other apps. Well worth trying out, Yappy might be a better way of texting from your computer.