Skip to content
Trusted By Millions
Independent, Expert Android News You Can Trust, Since 2010
Publishing More Android Than Anyone Else
4
Today
4
This Week
187
This Month
2861
This Year
112925
All Time Sony’s next lot of Xperia flaships — Z4 series — are due, and it’s a given that there’ll be a phablet flagship, a compact version thereof, and a tablet as usual. However, from what we’ve been hearing today, Sony could be up to something; a rather large tablet. It’ll be called ‘Xperia Z4 Tablet Ultra’ according to reports, and will have a massive 13-inch screen. With tablet sales dipping through the past one year, this seems like an attempt from Sony to win lost ground. To do that, Sony will have to pull off something absolutely magical; the alleged specs, that we’ve had our hands on, unfortunately, seem exactly that… magical, unreal.

Let’s start off with the display: the report says it’s going to be a 13-inch 3840 x 2400 pixel 4K UHD display, which sounds like something straight out of a teenager’s (tech) fairytale. Moving on to under the hood of the large device, there’s supposedly a Snapdragon 810 SoC with a 2.86GHz clock frequency ticking, along with (again a rather hard to believe) 6GB of LPDDR3 RAM. The specs sheet also mentions 64GB of on-board storage, which sounds like the most believable aspect.

What the tablet might also offer, if it does exist, is support for PS4 Remote Play, which totally makes sense considering the large screen size of the device. The imaging side of things on the tablet is rumoured to be taken care of by an 8 MP sensor on the rear — the 1/2.3″ Exmor RS sensor — with an f/1.8 aperture. Another thing that makes the entire hard to believe is the mention of a 12,100mAh battery, and a body thickness of just 8.6mm; although that’s something perhaps possible by today’s engineering standards, costs would be too much to make the device commercial viable. In all, I think it would be safe to rubbish the rumour. Make no mistake, Sony could well be working on an Xperia Z4 Tablet Ultra; but one with the specifications we just discussed is hard to digest for the time being. 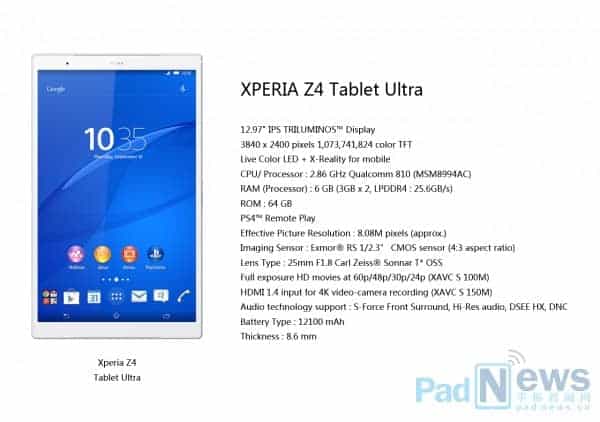