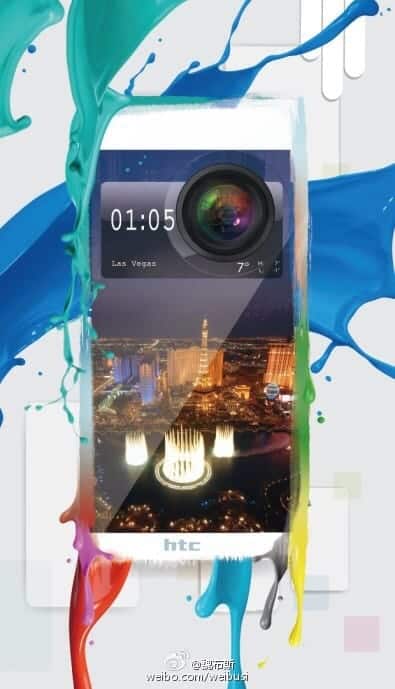 HTC One M8 was (and still is) an extremely popular smartphone, it’s a great phone and many people consider it to be one of the best designed and best-performing smartphones of the year. We’ve been seeing a ton of rumors and leaks when it comes to its successor, the M9. The HTC One M9 has been codenamed “Hima” in various leaks we’ve stumbled upon thus far and a lot of people eagerly wait for HTC to launch this thing. The HTC One M8 was announced back in March and according to a new report from China, its successor might come as early as January.

The founder of weibusi.net, which is a mobile technology website, posted something really interesting on his official Weibo (Chinese social network) page. If you take a look above this article you’ll notice what appears to be HTC’s invitation to a January CES conference where the company will unveil a new smartphone, January 5th is the date. The source guesses this will be the HTC One M9 “Hima” smartphone, though I’m not all that sure. The invitation is rather interesting and it is obviously trying to tease this device’s camera, I doubt HTC plans to announce yet another Desire Eye-like smartphone, so the One M9 is definitely a possibility. The event invite points to a great camera and a lot of different colors this smartphone will be available in, so it doesn’t exactly scream out “One M9”, besides, I guess HTC will want to hold a separate conference for their new flagship. What do you think, do you believe HTC will announce the M9 in January during CES or will they unveiled something completely different?

According to a previous leak, HTC One M9 “Hima” will feature a 5-inch 1080p (1920 x 1080) IPS display along with 3GB of RAM and 2,840mAh battery on the inside. The 20.7-megapixel rear-facing camera was also mentioned along with the 4MP or 13MP UltraPixel front-facing camera. Android 5.0 Lollipop and Qualcomm’s Snapdragon 810 processor were also mentioned in a previous leak, but we’ll hardly see a Snapdragon 810-powered smartphone launch so soon. This is rather interesting though, I’m really curious to see what will HTC unveil next month. Your thoughts?