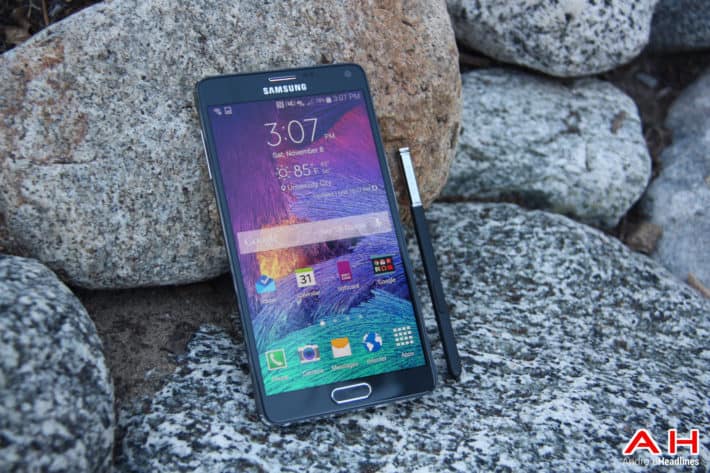 Samsung has announced their newest phablet offering back in September at IFA in Berlin. The Galaxy Note 4 is a real powerhouse, which was to be expected actually, and is a worthy successor to the Galaxy Note 3. Unlike its predecessor, the Note 4 features a metallic trim (metal, not plastic) around the device which makes it look and feel far more premium than the Note 3. This handset is currently the most powerful device in Samsung’s lineup and it will stay that way at least until this company unveils the Galaxy S6 in the coming months.

That being said, Samsung has just announced a new version of the Galaxy Note 4, though they did not say when will it be available. The main, and as far as we can tell the only, difference between the two devices is the LTE speeds they support. The current Note 4 includes LTE-A with dual-band carrier aggregation (the ability to combine two frequency bands) for downloads up to 150Mbps, while the new version brings together three bands for download speeds which can go up to 300Mbps (Cat.6 LTE). Very few people in the world will be able to take advantage of such connections though, not only does your carrier has to support such connectivity (not many do), but you also need to be extremely close to the tower in order to take full advantage of the signal strength (the fewer people connected, the better), this is more future proofing than anything else in my humble opinion.

The new Galaxy Note 4 will also support the Category 9 LTE speeds which can go up to 450Mbps, though you’ll hardly be able to take advantage of that in the near future, considering Cat.9 LTE won’t be rolling out until late 2015. That’s it, the source did offer this device’s specs, and it seems the only change between the original and this model is in their LTE speeds, the rest of the specs look the same basically. You still get that beautiful 5.7-inch QuadHD Super AMOLED display, 3GB of RAM, 16-megapixel camera, S Pen, etc. In case you want to check out this device’s full specs, click here.